Early on in lockdown I was determined to find ways to cut down on unnecessary food waste. I planned out three meals using sun-dried tomatoes, so there are no prizes for guessing what I forgot to pick up in my weekly shop! This is how I ended up learning how to make sun-dried tomatoes at home.

I guess that technically they’re actually oven dried tomatoes instead but that doesn’t quite have the same ring to it!

Here are a few good reasons to make sun-dried tomatoes at home:

Of course it goes without saying that they are also delicious. The drying process brings out their sweetness and sharpness in a concentrated, joyful hit.

It’s a good idea to make a few more than you think you’ll need as they’re ridiculously easy to snack on direct from the oven. Trust me, I know from experience!

Also be aware that it will look like you’re making a lot of sundried tomatoes when you put them on the tray, but they will shrink considerably. Always make more than you think you’ll need.

How to make sun-dried tomatoes at home

Okay are you ready? This is probably the simplest ‘recipe’ I’ll ever share, as well as the shortest. 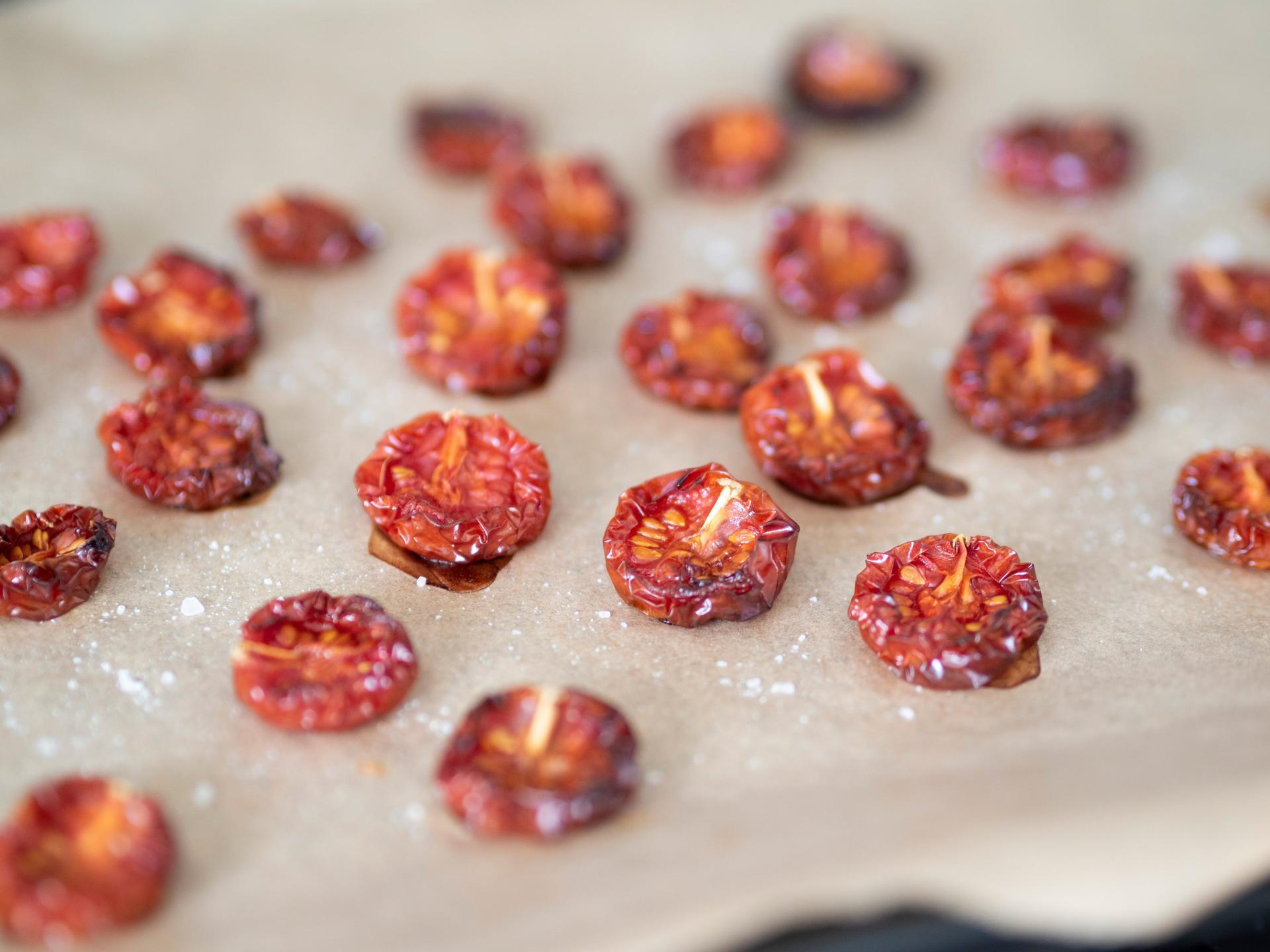 Keep an eye on them during that last half an hour as all ovens differ. As you can see from my pictures, this batch started to catch at the edges because I wasn’t paying them enough attention. (They still tasted great!)

Preserving Some For Later

You can store your oven dried tomatoes dry (i.e. without any oil) in either the fridge or freezer. Allow them to cool and then transfer them to an airtight container. By this method, you want to pack them in to avoid air in the container or use a zip lock bag and squeeze all of the air out.

I’ve been told that they should keep for up to 6 months this way… but I have to confess that I’ve always used mine up within days so I can’t say that I’ve tested this method.

To infuse in some extra flavour, place the tomatoes in an airtight container and cover them with oil. Add in a sliced clove or two of garlic and some sprigs of rosemary if you have some, then pop them in the fridge.

I had previously used up a jar of sun-dried tomatoes so I’d kept the jar and leftover oil. I used this to preserve some of my oven dried tomatoes. Not only will this save you money on oil, but it means that your tomatoes will benefit from lots of delicious flavours in the oil from the previous batch.

Ways to use your oven dried tomatoes

So now you know how to make sun-dried tomatoes at home. There are so many ways you can use them. Here are a few of my favourites:

Brighten up creamy or cheesy dishes with their beautiful sharpness. Think macaroni and (vegan) cheese, green pesto pasta dishes and risottos. For example, add some to my 300 Calorie Vegan Cheesy Bake for a low calorie low fat way to add some extra pizazz.

Add them to sandwiches as a filling or as a topping on pizzas. They work really well on my Easy Vegan Pesto Puffs.

Enjoy them on bruschetta, garlic bread or focaccia. If you’re baking your own bread, add some chopped dried tomatoes into the dough.

They’ll also jazz up your salads and soups!

Let Me Know If You Try These

Are you tempted to try making some yourself? If so please do let me know how you get on! You can comment below or tweet me here: @lovedbylaurac