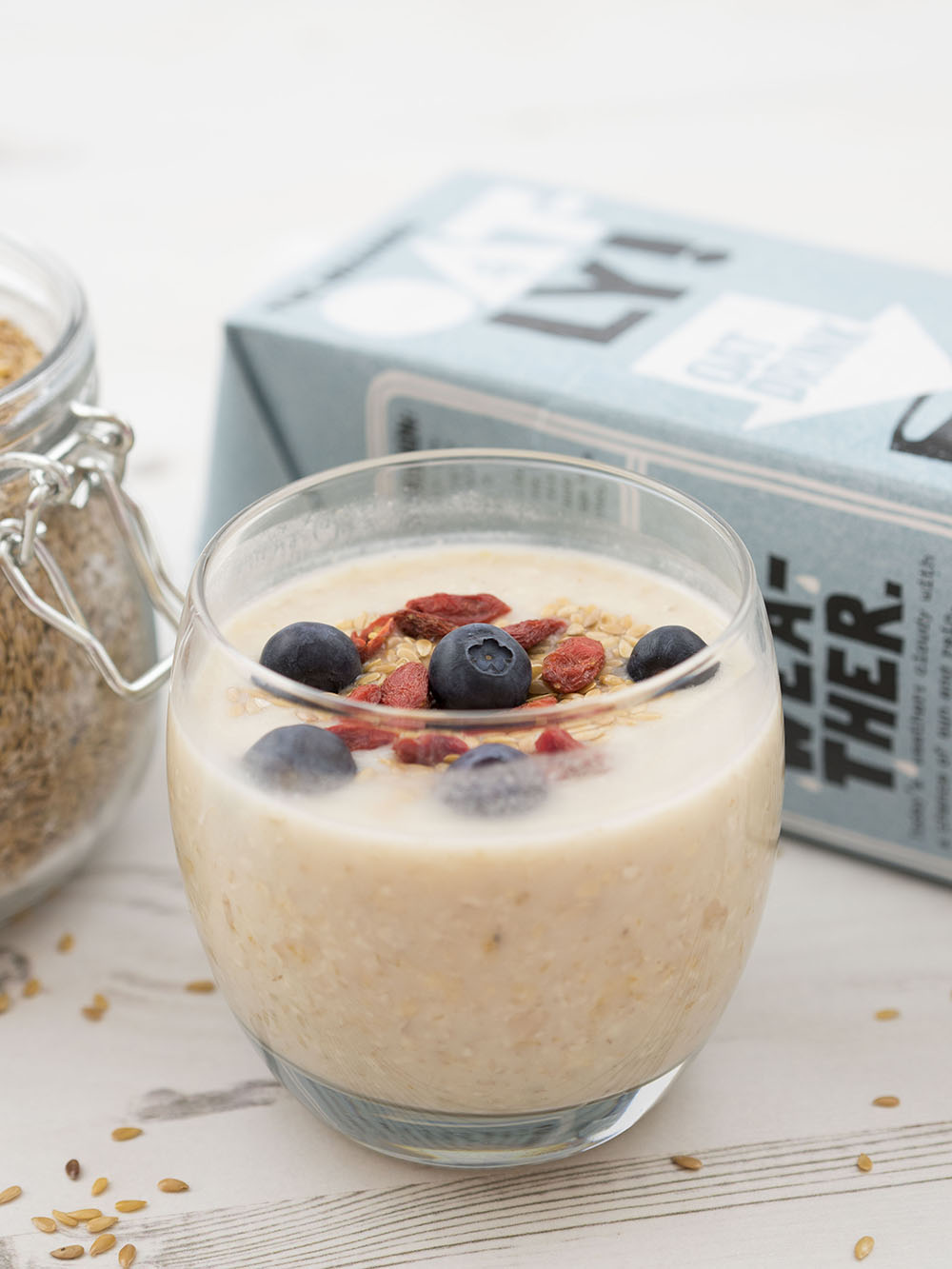 Holland and Barrett recently got in touch with a fun foodie challenge. They sent me a box of healthy wholefoods and asked me to incorporate these into my week by swopping out some of the ingredient I use now for their healthier alternatives. I was also sent a really helpful nutritionist’s plan to use if I wanted to. 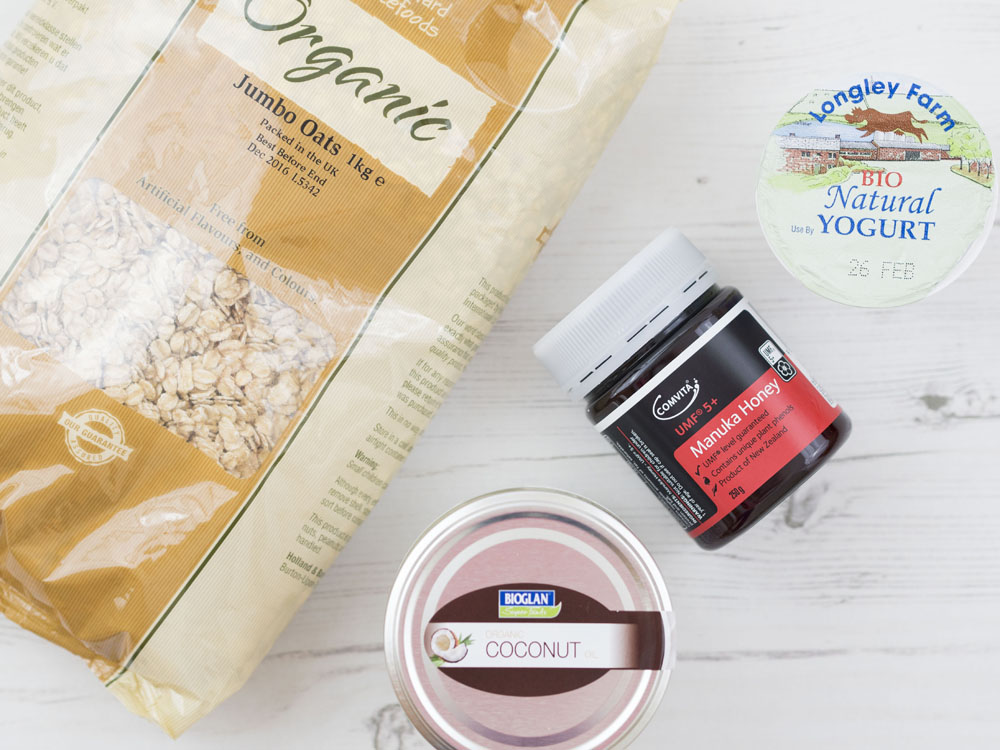 I recently posted a host of healthy snack ideas (which you can read here) so what really appealed to me from this box was all of the healthy breakfast choices. I’m usually guilty of just grabbing my Belvita Breakfast biscuits and eating them on the go, so I decided to focus on this part of my diet, as well as trying out a few more healthy lunch and snacks along the way.

Here’s how I got on. You’ll note that I’ve used the same core ingredients for all breakfast 3 recipes, because this way it’s much more cost effective and there’s no food waste, so you could easily do all three of these in a week like I did. 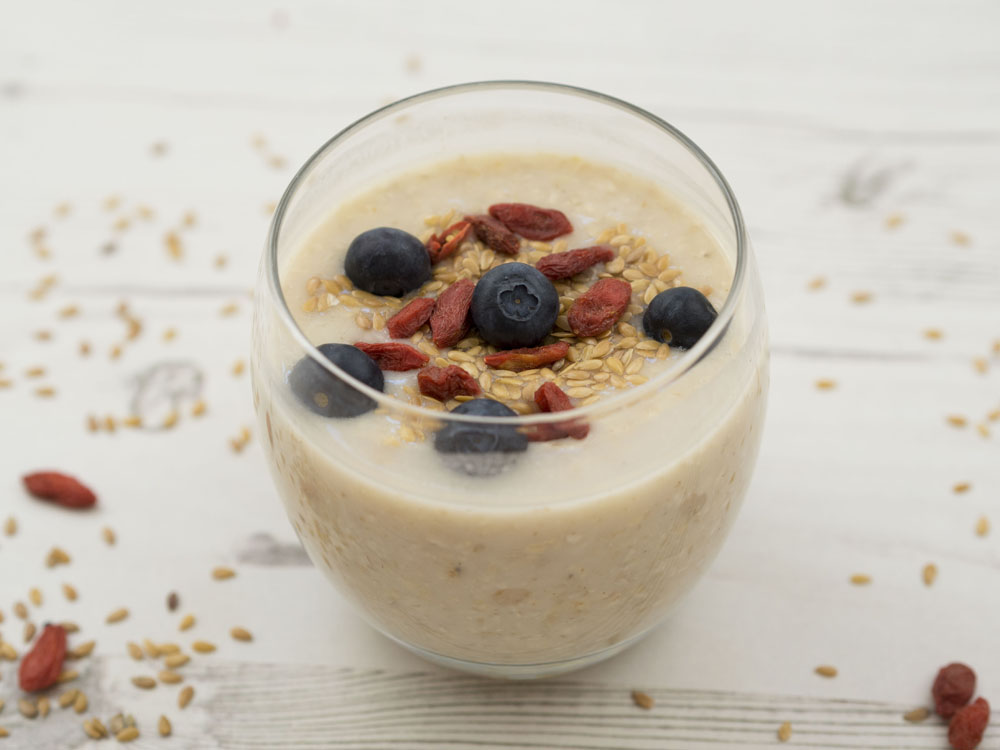 These were very easy to make. You mix together oats, yoghurt and milk (or an alternative) and refrigerate them in an airtight container overnight, as per this recipe.

I swopped the yoghurt for Wot No Dairy? Plain Dessert and Oatly instead of milk. 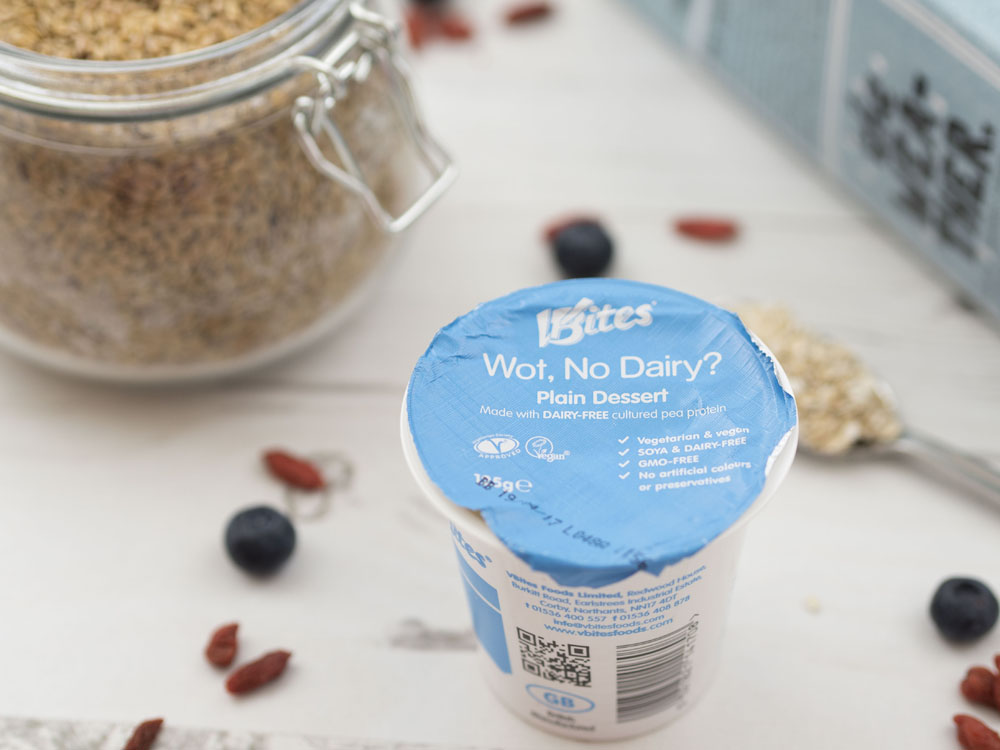 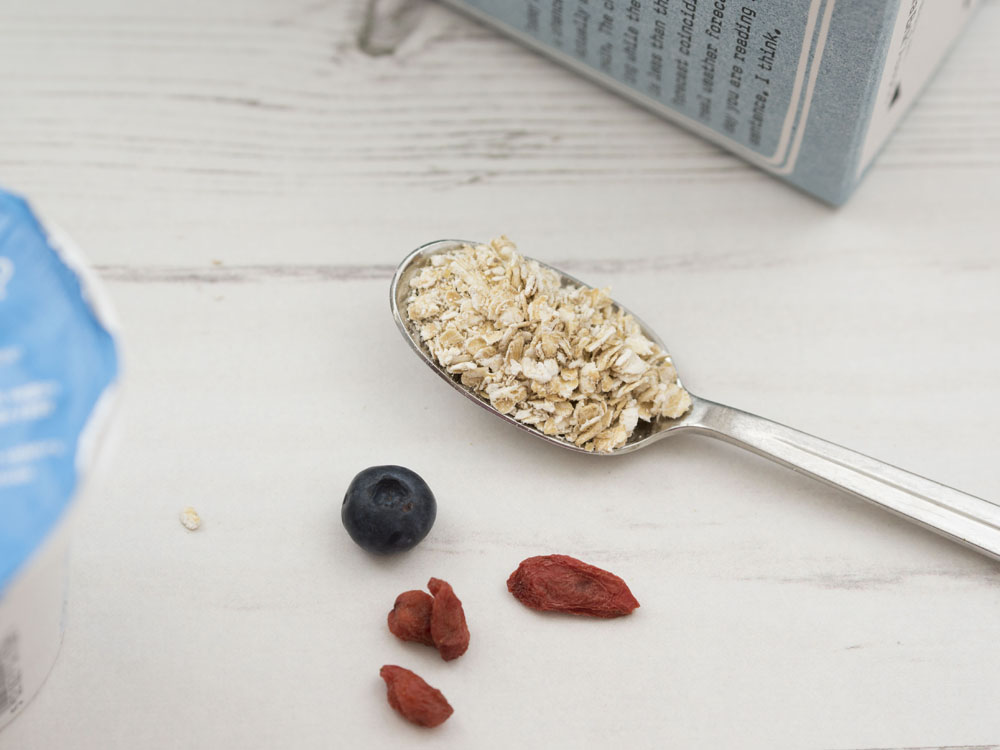 Both are dairy free options so are good for those with a dairy intolerance, plus they are low fat but calcium and vitamin rich. 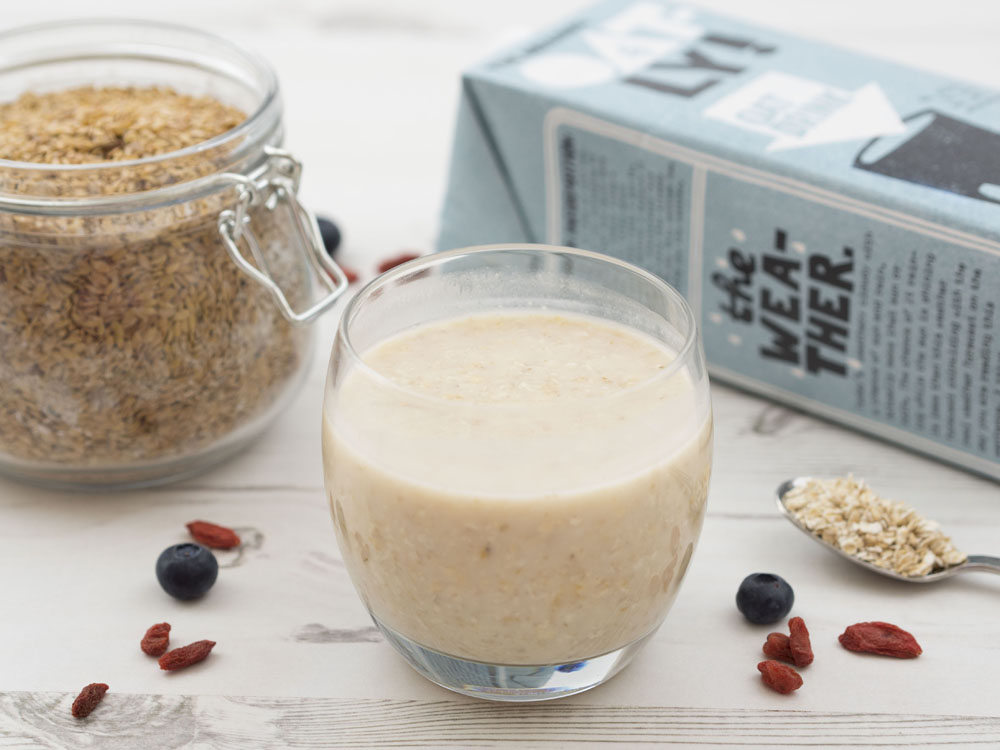 On it’s own I found the consistency quite watery, but my addition of blueberries and goji berries and a teaspoon of Golden Linseed gave the texture and extra flavour kick needed. 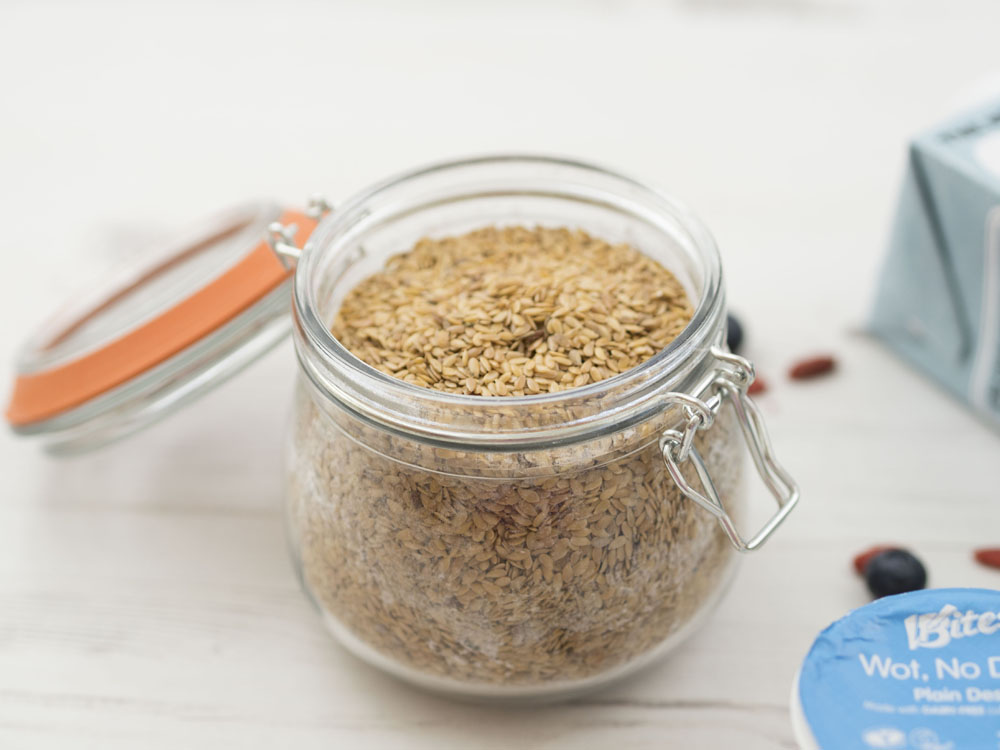 I’ve never eaten goji berries before but they are my new favourite ingredient. They taste a little bit like a fruity raisin and are highly nutritious, so help to turn this simple breakfast into a superfood powerhouse.

The nutritional plan suggested this blueberry muffin recipe but I don’t like banana! Instead I made a cobbler using the oats and oatly milk (almond milk would work just as well!). 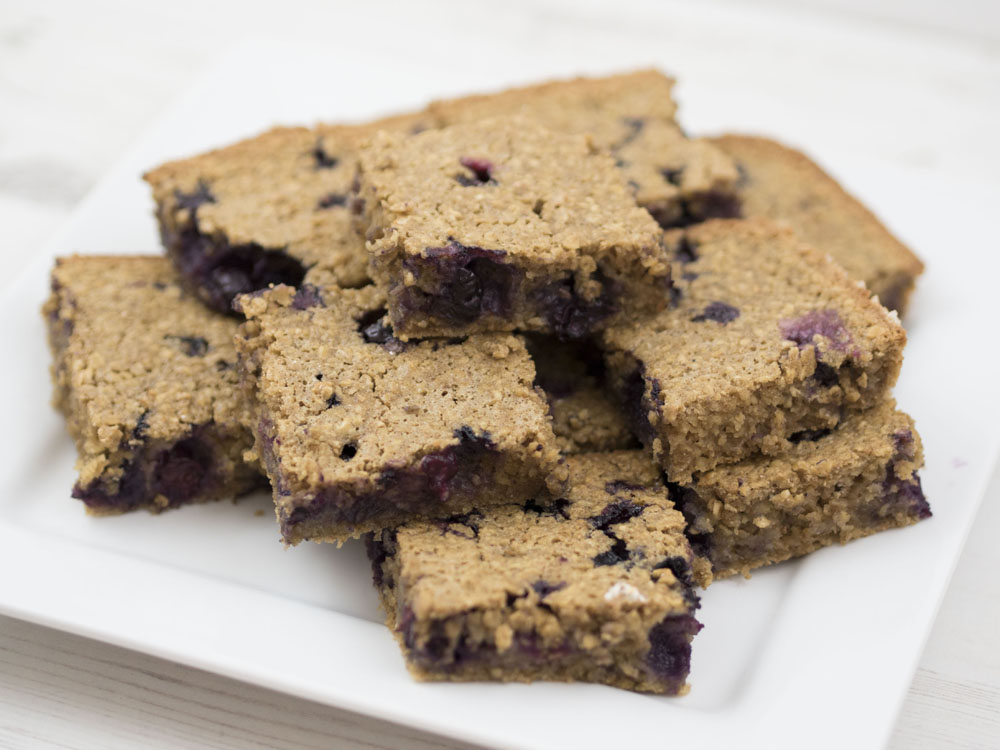 This makes 12 squares and two are filling enough, so freeze half and eat the others for breakfast over the next few days. I served with a dollop of natural yoghurt. 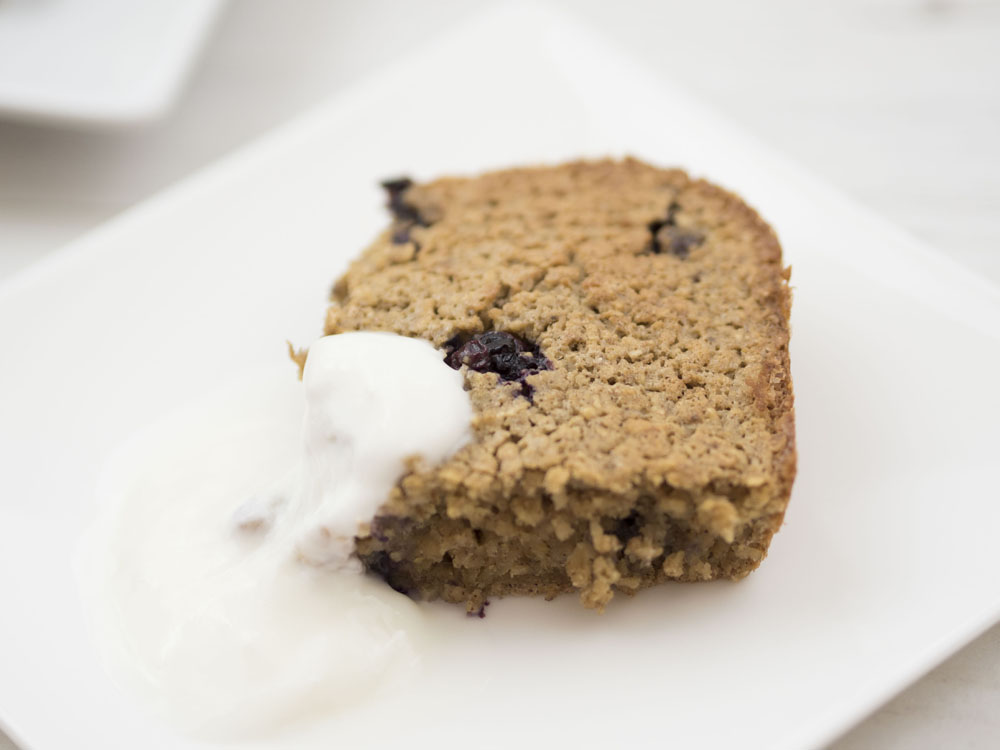 This one is perfect for a lazy weekend brunch! 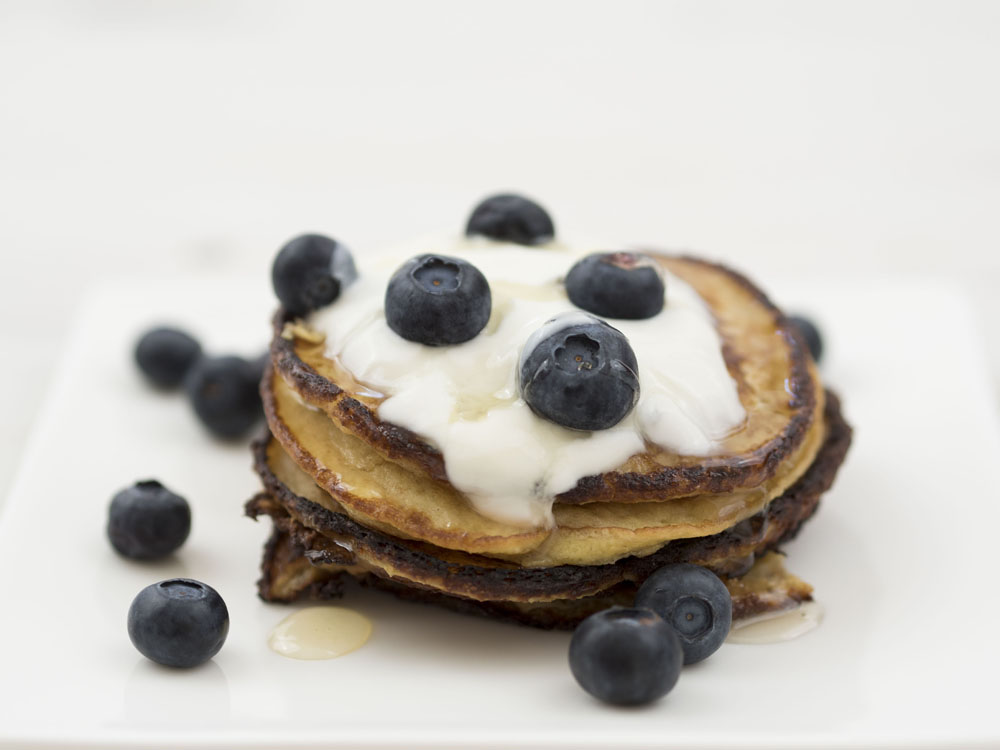 I made some oat flour by taking normal oats and blitzing them in a food processor, then added egg, natural yoghurt and honey (as per this recipe).

You can use whatever honey you like, but I was lucky enough to receive some pure Manuka Honey to try which is claimed to have additional nutritional values than other kinds. It’s gorgeously sweet and not only did I put a little bit extra into the pancakes, I also drizzled some over the top too along with some extra yoghurt and blueberries. 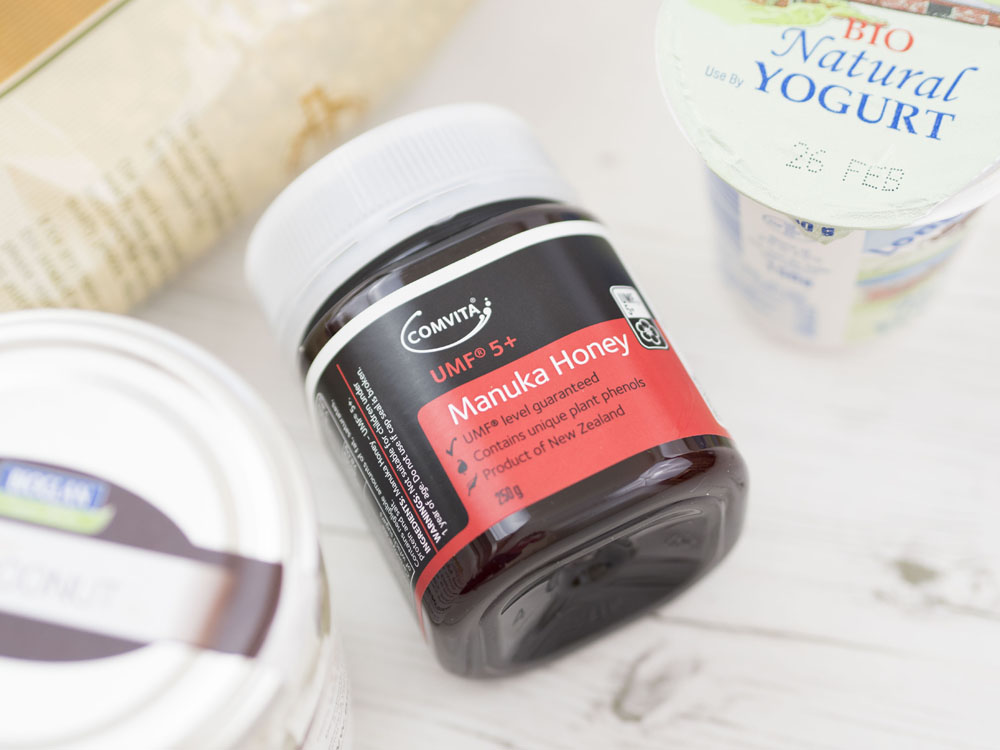 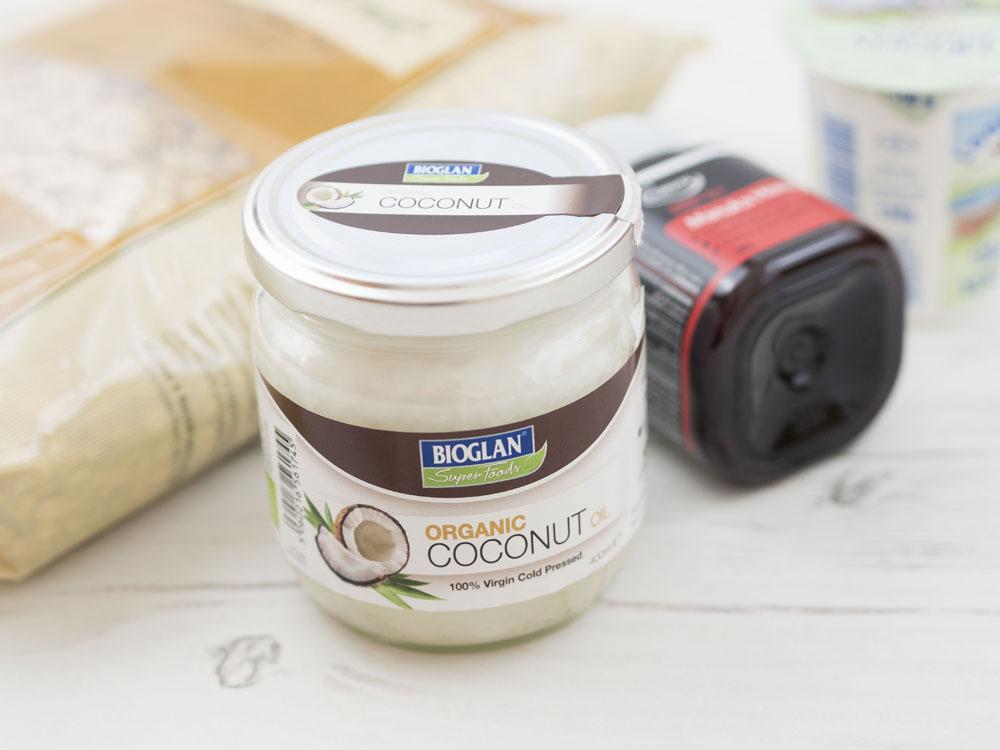 I cooked my pancakes in coconut oil and they were all done within 10 minutes.  I was genuinely impressed by how indulgent they tasted, and enjoyed them guilt free. I did feel rather full after eating the whole stack and didn’t end up needing lunch that day, so I’d suggest sharing them with someone if you try these!

I received a whole host of other things to try too, so I’ve picked out my favourites from these below.

Bran crisp breads. Much like the Kallo Ricecakes in my last healthy post, they would be dry and bland on their own, but come to life teamed with a big dollop of red pepper hummus and some fresh carrot sticks to make a great high fibre, low calorie option. 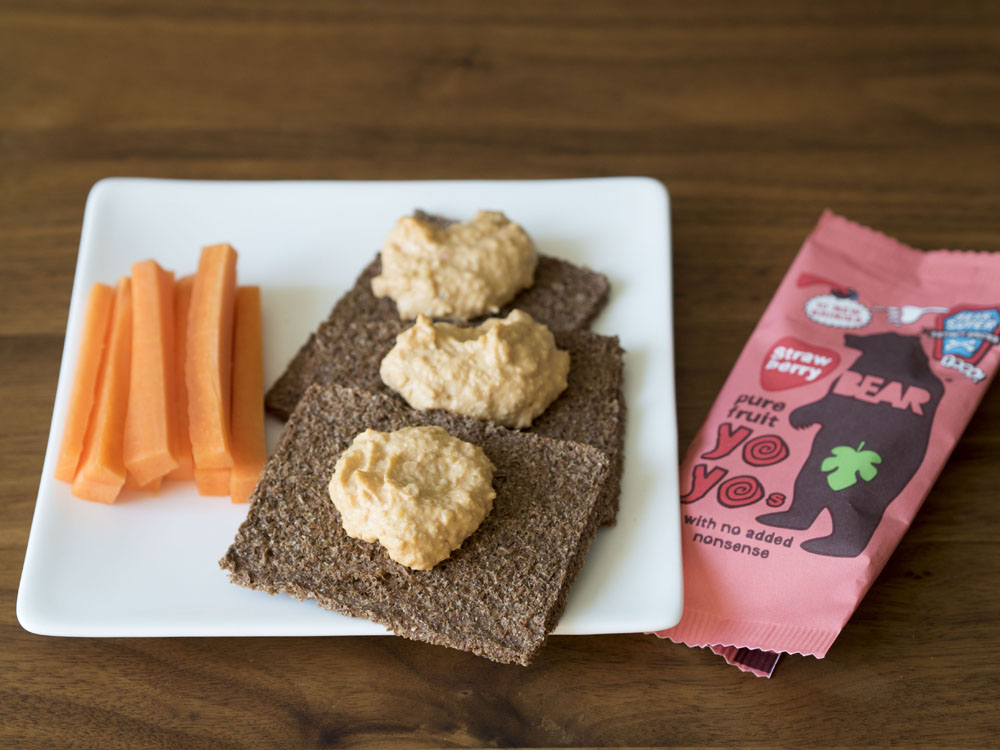 For handy ‘on the go’ snack options, my picks were the Fruit Yoyos and Nakd Bars. The cashew cookie bar wasn’t a flavour I was keen on, but I’m already a fan of the Strawberry Crunch bar and often pop one in my handbag for when I get peckish mid train journey. 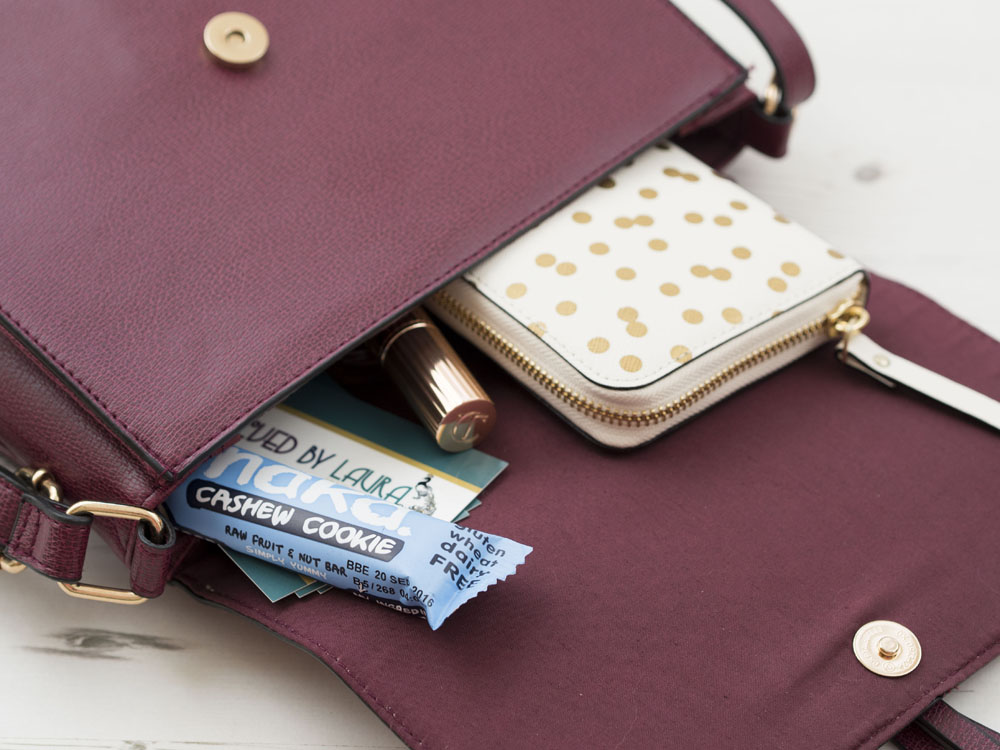 Cashew nuts. In their natural form I adore them and they’re such an easy, filling snack at home. 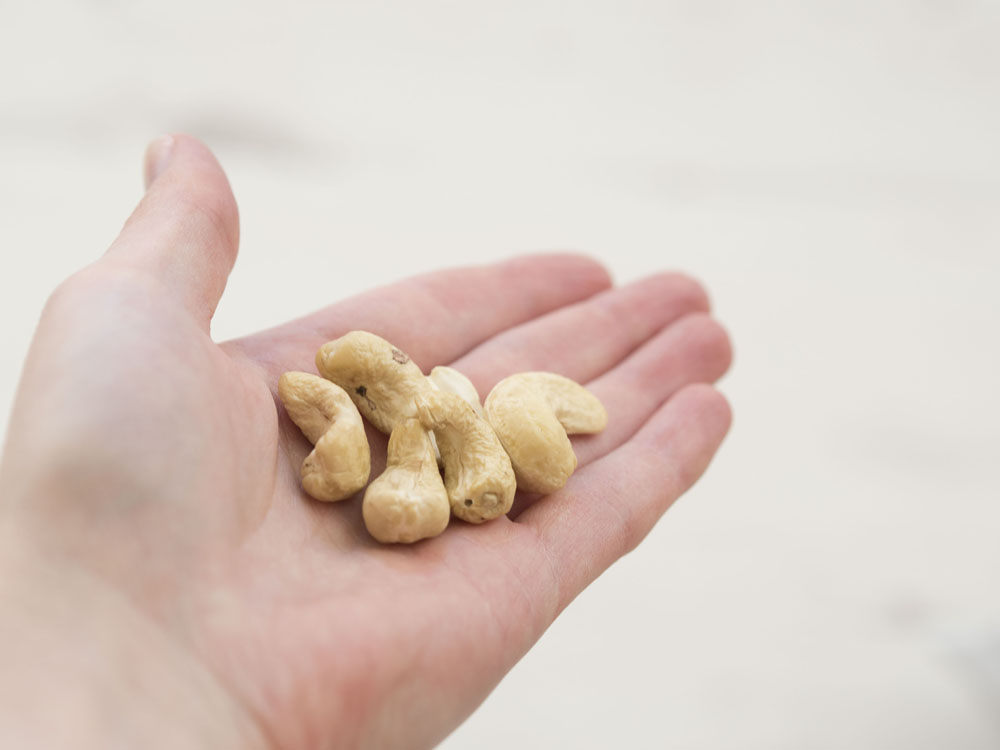 Quinoa Chips. They don’t taste anything like quinoa, they’re more like the texture of something like Frazzles or Quavers. The portion size in a packet seems really big too so these would be great for sharing during a movie without having to feel like you’ve over indulged. 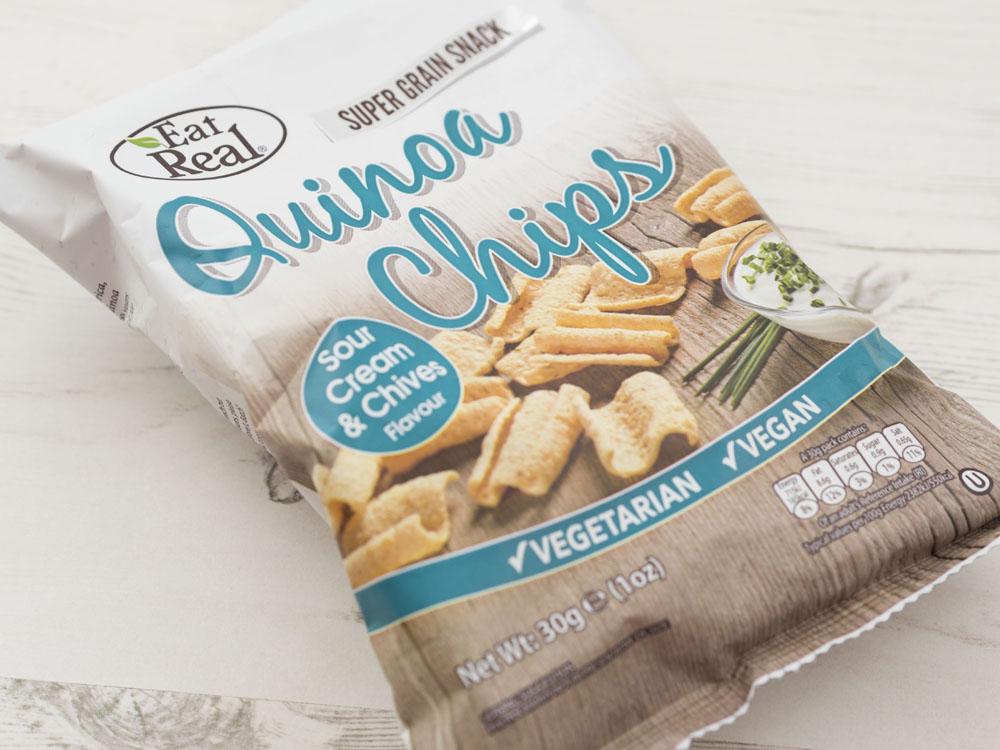 Overall, I really enjoyed taking up the challenge. Whilst my working life doesn’t afford me the time to follow the whole nutritional plan to the letter, I’m going to try and incorporate 1 or 2 of these into my diet each week to keep things interesting. Thanks for all the new ideas Holland and Barrett!

What do you think of my healthy alternative picks? Would you be tempted to try any of these?