Cambridgeshire Digital Awards 2015 | I Only Went And Won Something! 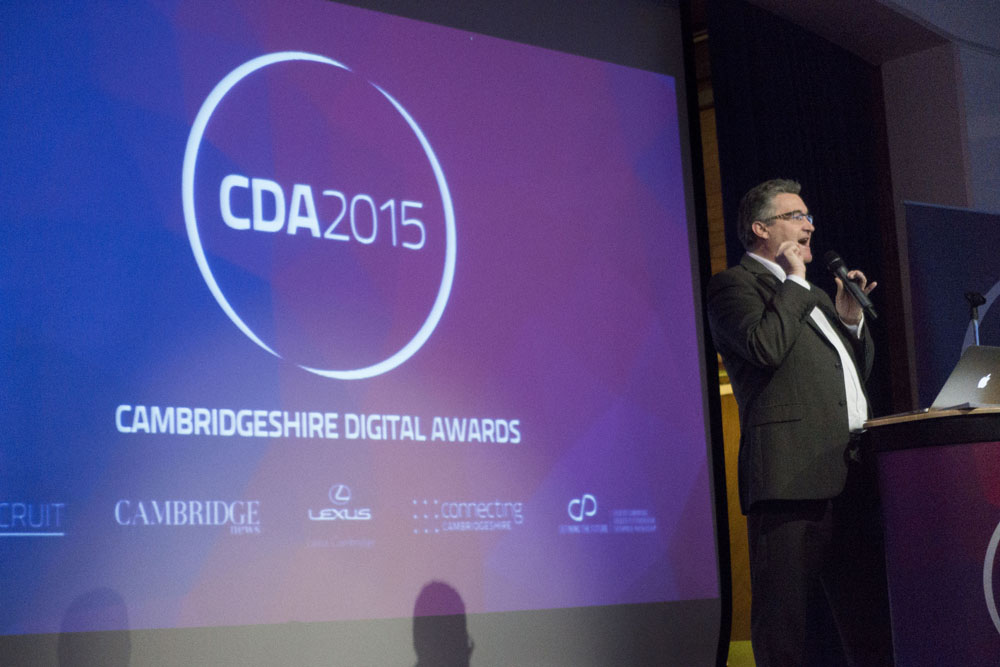 Last week I attended the inaugural Cambridgeshire Digital Awards. I’d been shortlisted in the Blog Entertainment category which had come as a complete shock when announced, but a happy shock indeed!
This was a very different to the other events I’ve attended as it was very business focused, designed to celebrate the online achievements of local businesses, charities and schools. My award category was the only non-business one in fact.
When it was my turn to introduce myself and explain why I was there I turned beetroot red as I said: “I’m a lifestyle blogger, I’m nominated in the entertainment category”, feeling woefully inadequate surrounded by professional web designers, application coders and videographers.
“Oh that’s great!” said the gent to my left encouragingly. “I went travelling a few years back and I really wanted to document it all in a blog. How did you get started?” Before long the table was chatting about the power of Social Media and the rise of the super Vloggers and Vine Stars, so maybe I wasn’t quite such a fish out of water after all!

N had come to the awards with me for moral support and when it was his turn he introduced himself as ‘Laura’s part time hand model’ since I’m always getting him to hold things for me whilst I take a picture! That boy..

We tucked into a lovely awards dinner… 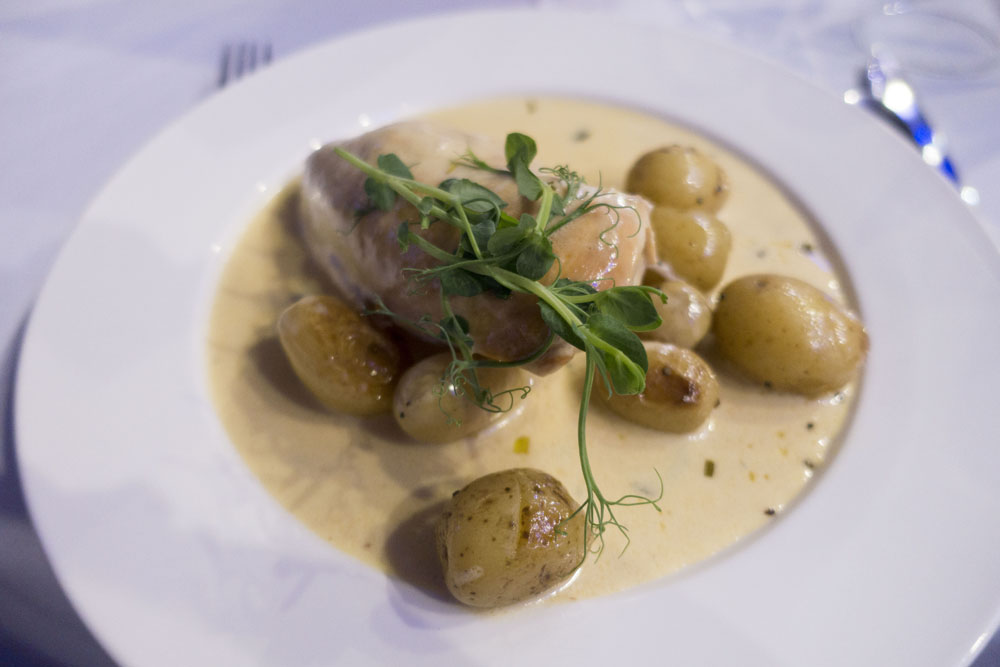 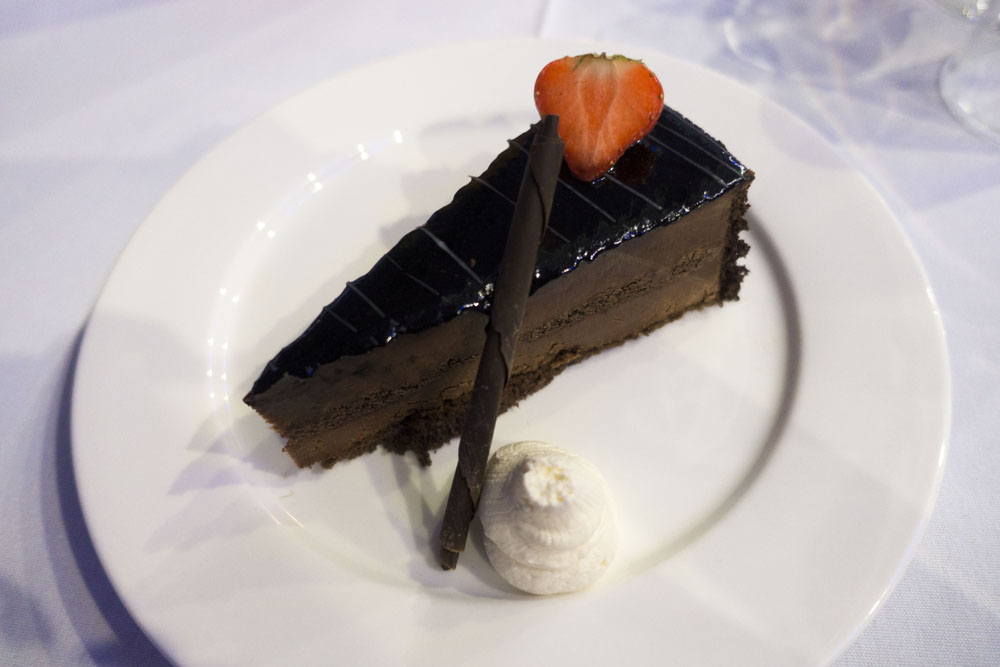 …then comedian Mark Dolan took to the stage to entertain us and calm our nerves. 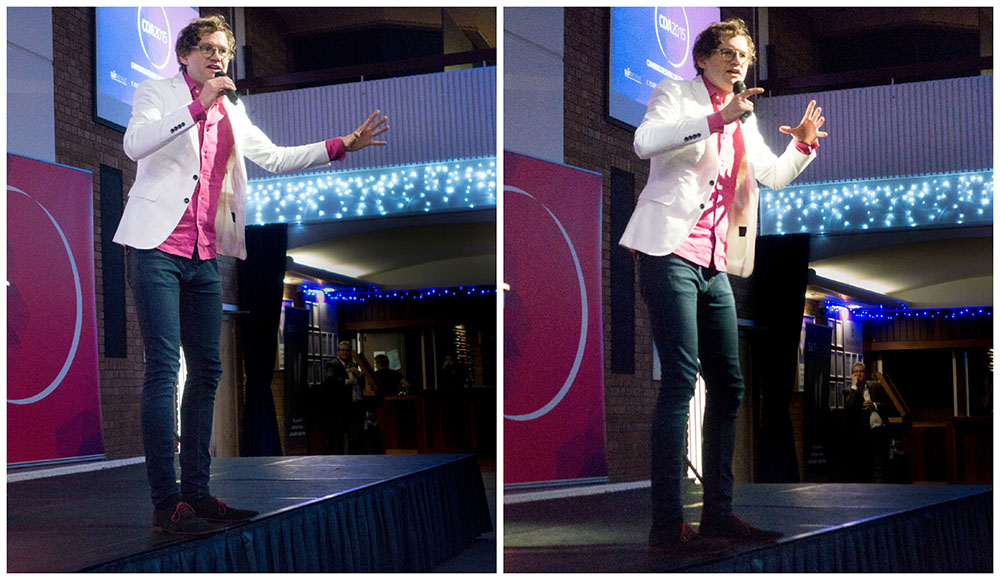 It turns out that the people on my table are doing truly inspirational work. Paul designed an app for Policemen and women called Pocket Sergeant and Andrew used to work for the BBC filming documentaries and now runs Video Production Company Origins Of Motion. He’s also recently started The Memory Lane Company which makes once in a lifetime video keepsakes that tell the story of a person’s life, through interviews, photos and footage.

He explained that once a year they also plan to film a charity video for someone deserving. Think of a terminally ill patient being able to pass on their life story told through their own words to their children and grandchildren. What an amazing idea.

The awards got underway and I whooped and applauded as my blogging friends Claire of Claireabellemakes picked up Silver in the Blog – Business category and Karen’s Shutterhub won gold in both of her categories.
Then it was my turn and I’m so so SO pleased to say that I received the Bronze award in my category! I went up on stage, accepted my plaque, got my photo taken and and then I was back at the table, not quite able to take it all in! 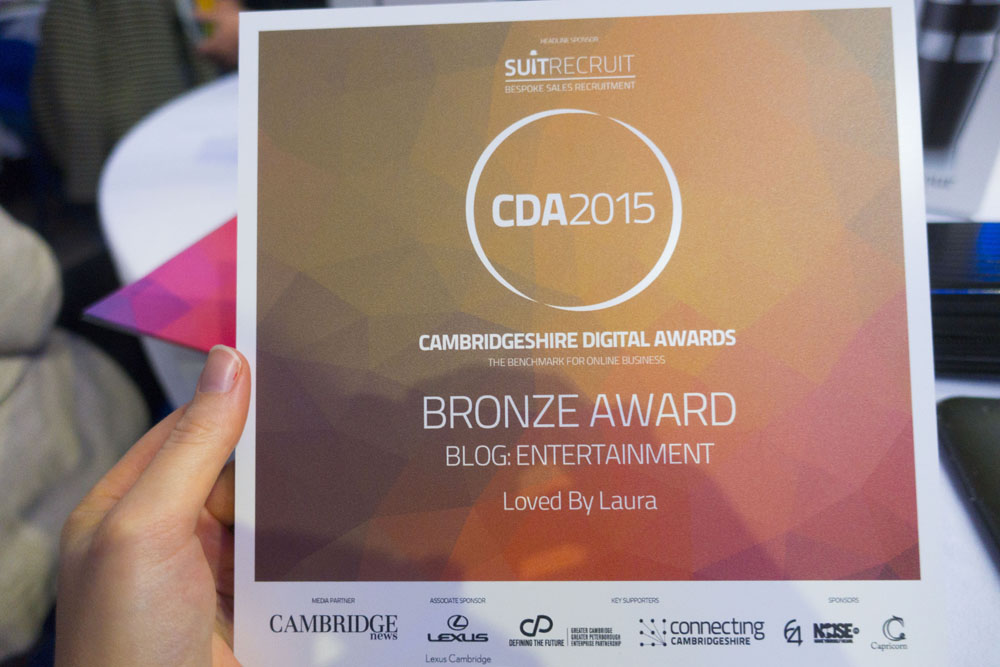 Silver went to the lovely Jess for jessicainyourear.com and Karen was flabbergasted upon scooping gold for idontlikepeas.co.uk .
The rest of the awards went by in a blur and before I knew it the ceremony was over and it was time to go home.

On the way out I managed to grab a word with one of the sponsors of the awards, Noelle Godfrey from  Connecting Cambridgeshire. N and I were already well acquainted with their work because they just brought Superfast Fibre Optic Broadband to our little village in the sticks…the village that is usually last to get everything! Gone are the days enduring the dreaded ‘buffering’ for a 20 second video of a panda sneezing, now I can watch all the Youtube Vlogs I want and don’t mind admitting that I’ve already binge watched 3 seasons of Suits.

So thanks Connecting Cambridgeshire for sponsoring the awards… but even more so for allowing me to watch the delicious Harvey Specter kick legal ass every evening whilst cooking my dinner!

Well done to all of the amazing shorlisted companies and a big thanks to Iain Johnson and the rest of the team at Premio64 who brought the awards to Cambridgeshire and allowed me to be a part of it!

If you’d like to know more about the awards, you can read all the articles and latest news here.