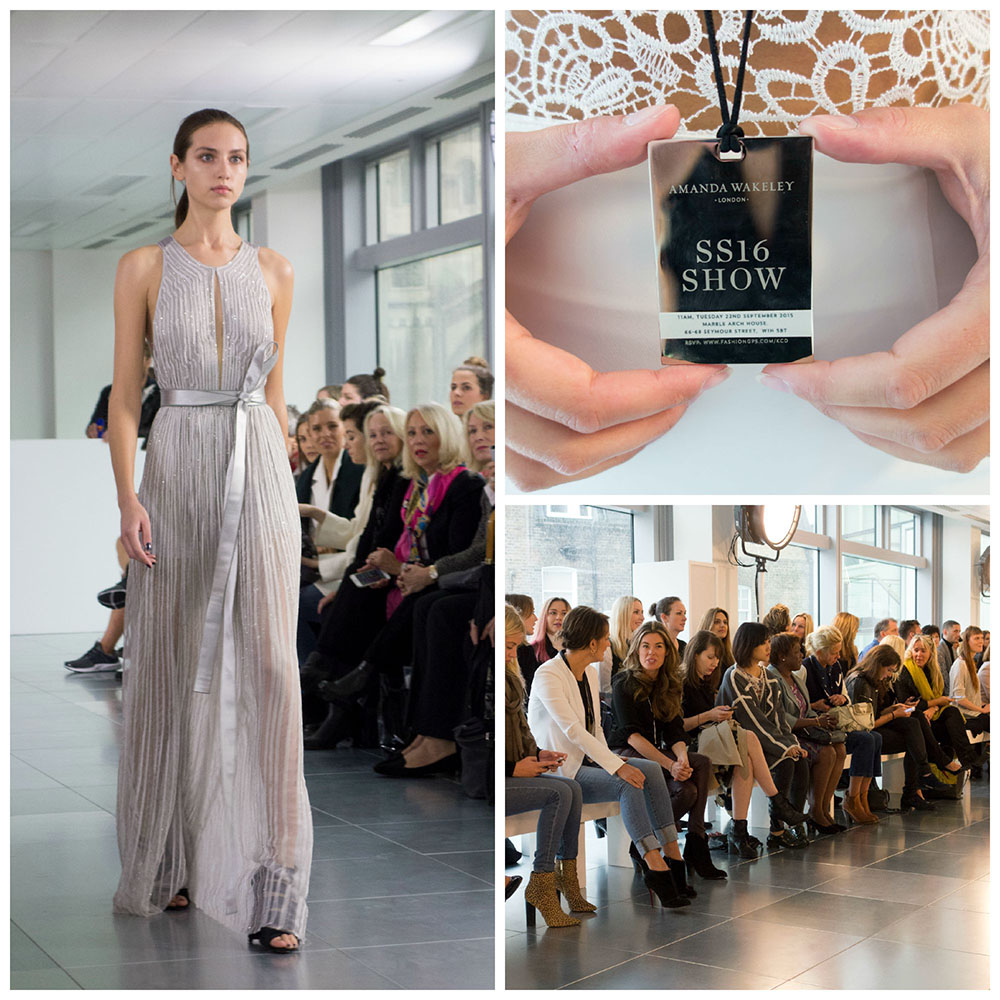 Yesterday was pretty surreal. I’m still pinching myself in disbelief that it actually happened. I headed down to London on the train and braved the pouring rain to attend the Amanda Wakeley SS16 Collection Showcase at London Fashion Week. It was my first ever show and it was SUCH a good one!

Warning – this is a VERY picture heavy post – prepare to enter a dreamworld of tulle and silk!

I’m a classic kind of girl. I like timeless pieces that aren’t dictated by season and go for chic tailoring, sleek lines and flattering silhouttes. Amanda Wakeley’s designs are the epitome of this with elegant, flattering cuts that skim and cling in all the right places. I first became aware of her work when I was getting married as her wedding dresses are the stuff of dreams. Therefore I was beside myself at the chance to see her latest Womenswear collection in person.

I was so very very nervous before the show; fretting about being very out of place among the fashion elite in my little black high street dress and heels.

Would they all take one look at my £40 handbag and tell me to leave?
Would my slightly scuffed shoes be laughed off the premises?

In a word: No! The room was filled with press and buyers and fashion writers who were far more interested in the collection than what I was up to and I settled in my seat to enjoy the show, my friend Carolin by my side. 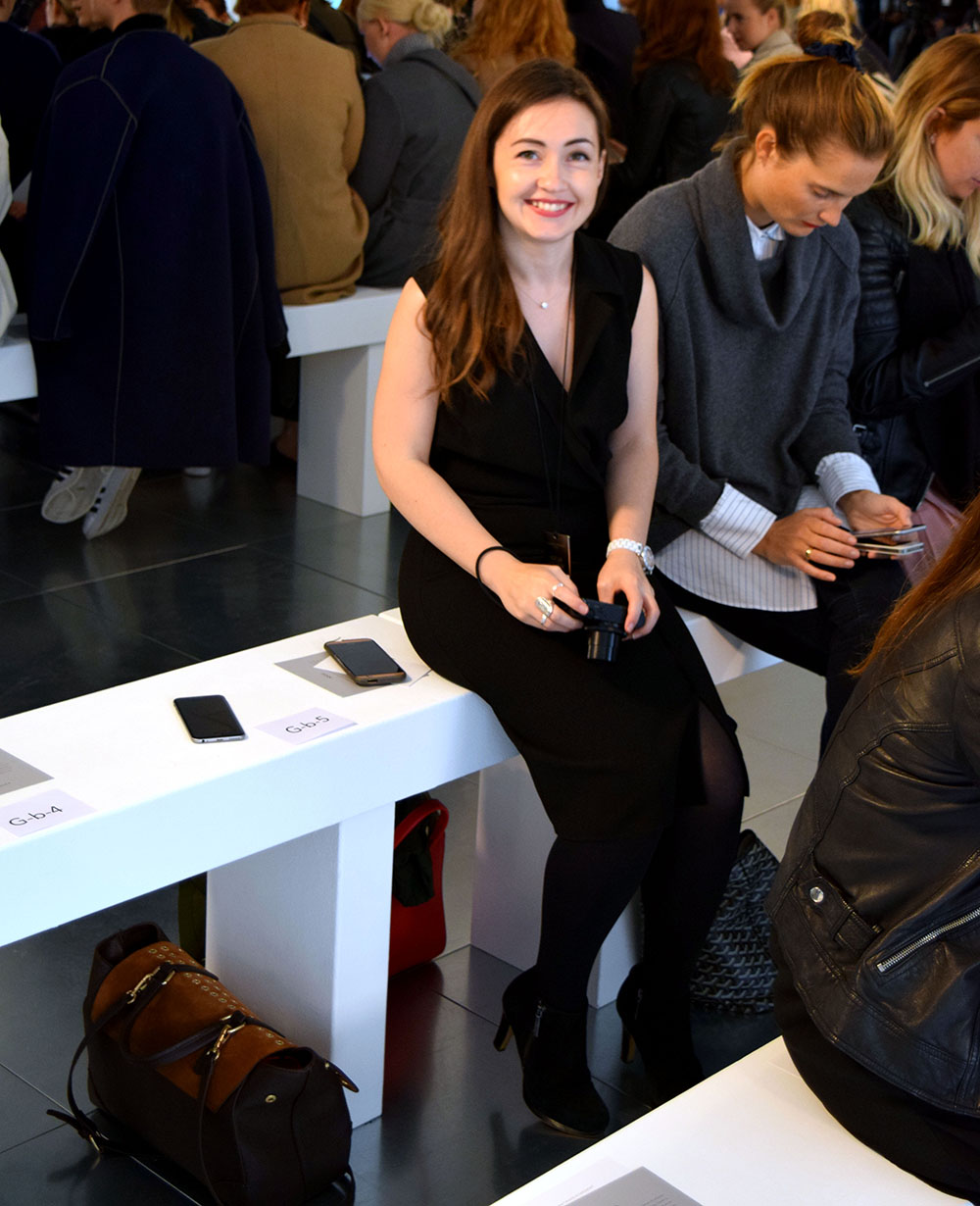 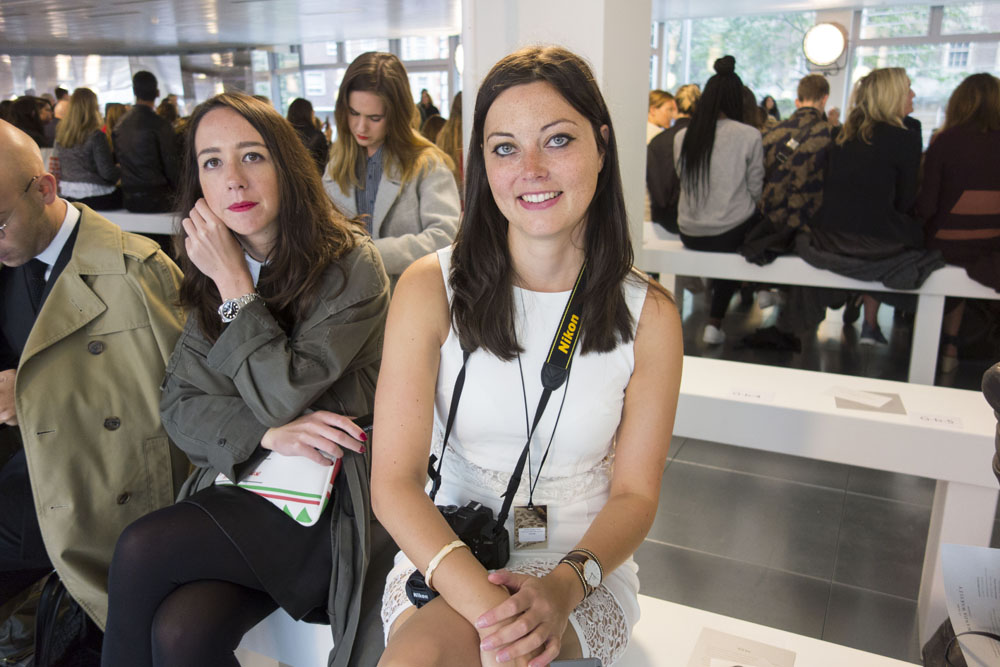 Just before the start one of the organisers said “Excuse me, would you like to move to the front row?” and then squeezed us in. Before I could even comprehend this the music began and there was an excited buzz as the models came into view one after another. Here’s what I saw: 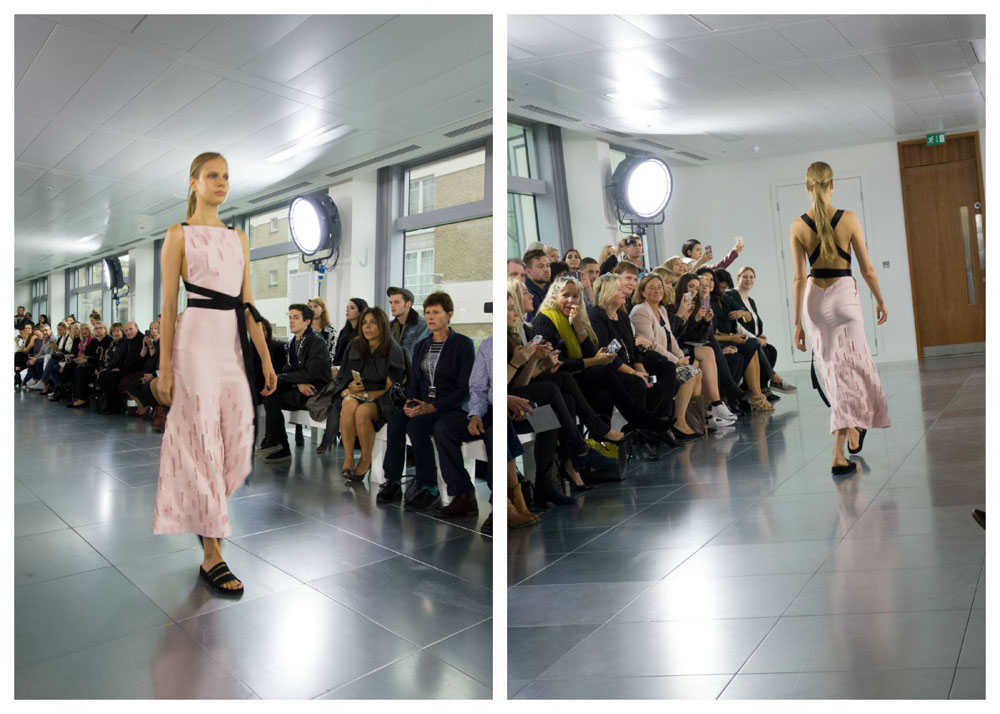 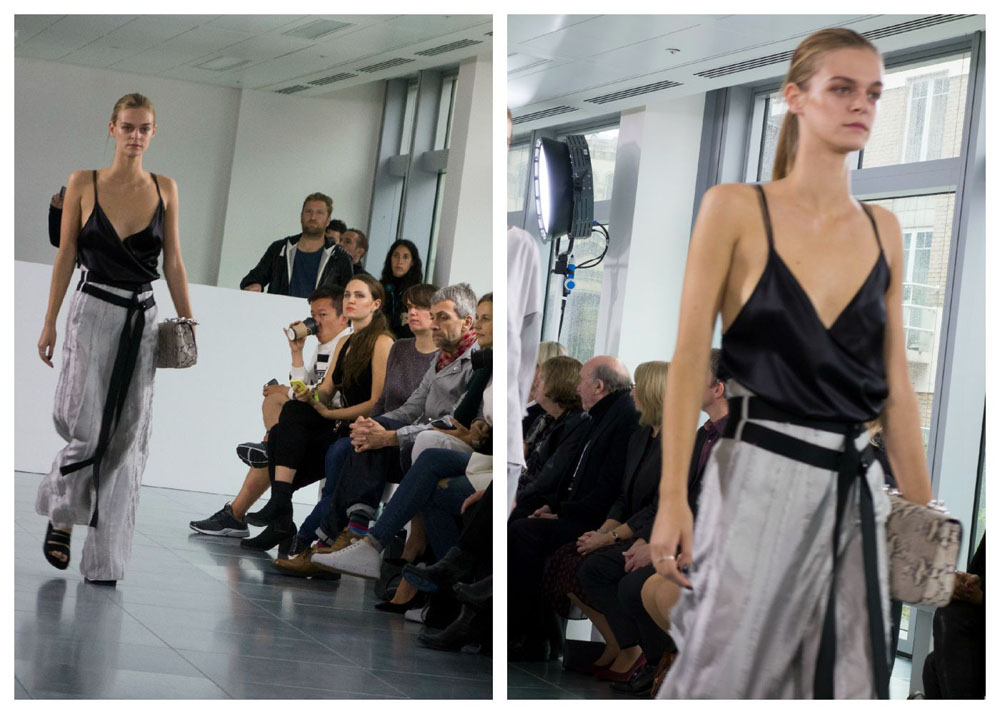 Inspired by the work of architect  Calatrava, the collection sought to combine strength and delicacy. Tailored pieces were softened by sheer textures, fluid silks or the thinnest spaghetti straps. 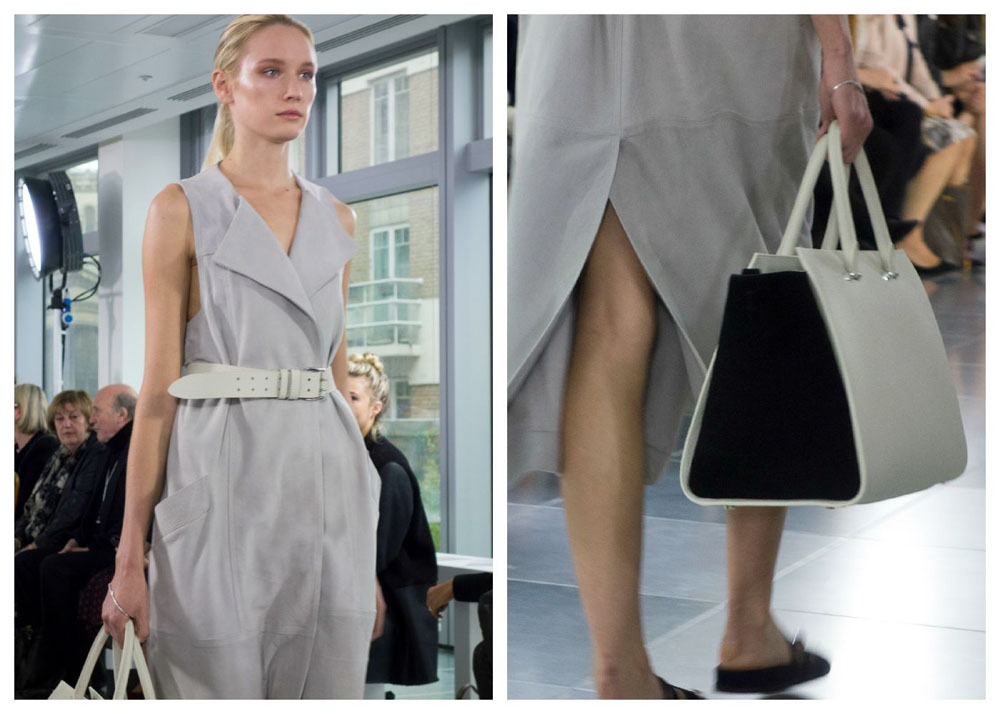 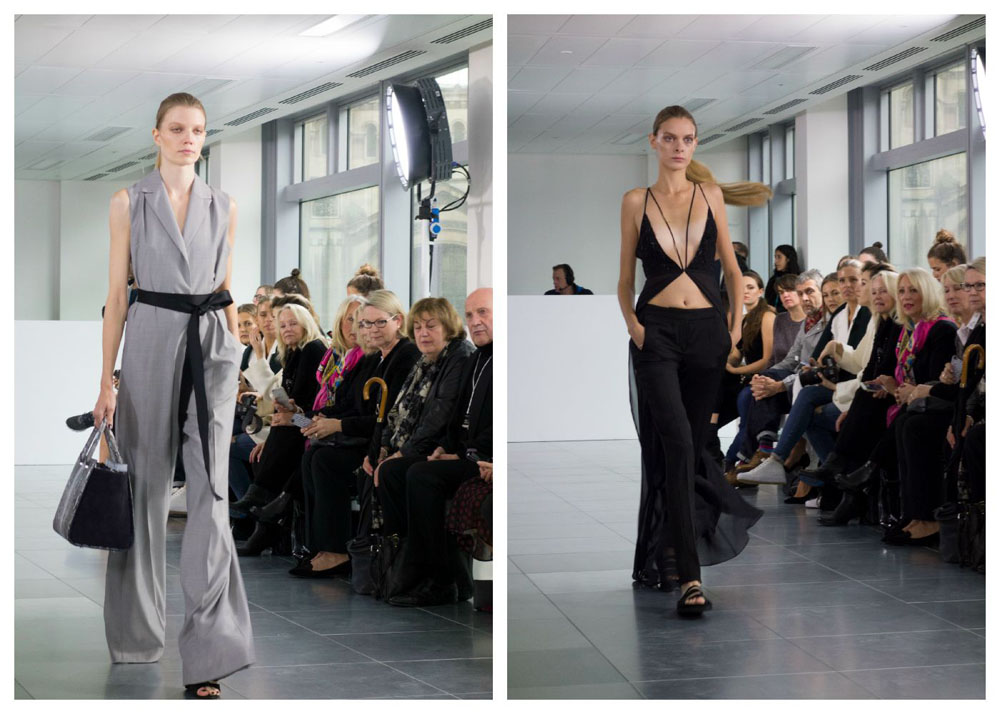 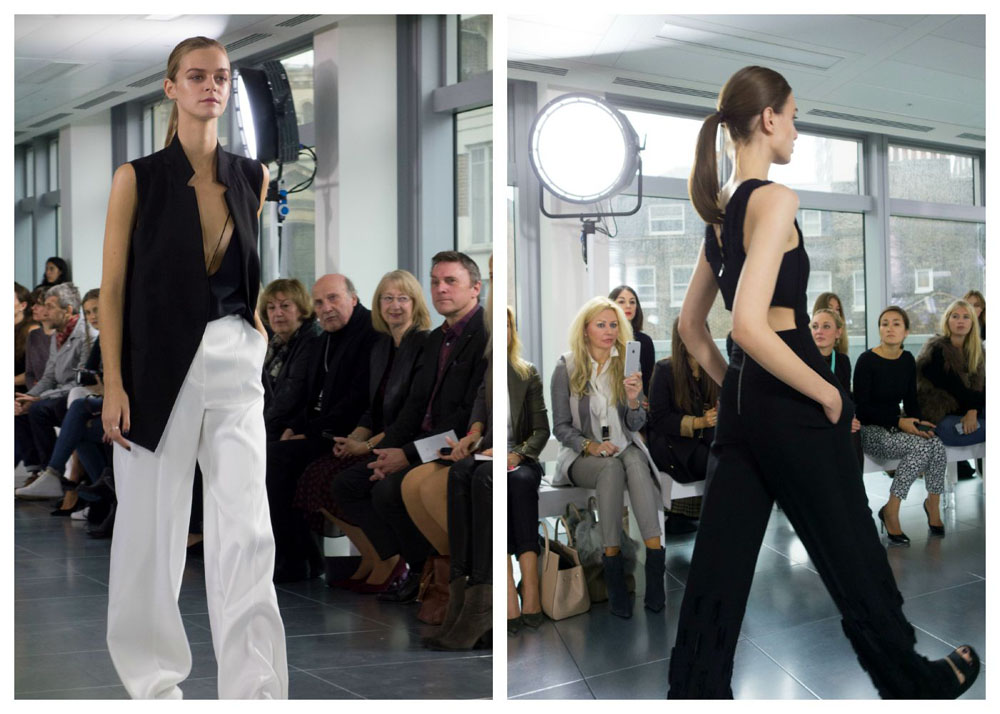 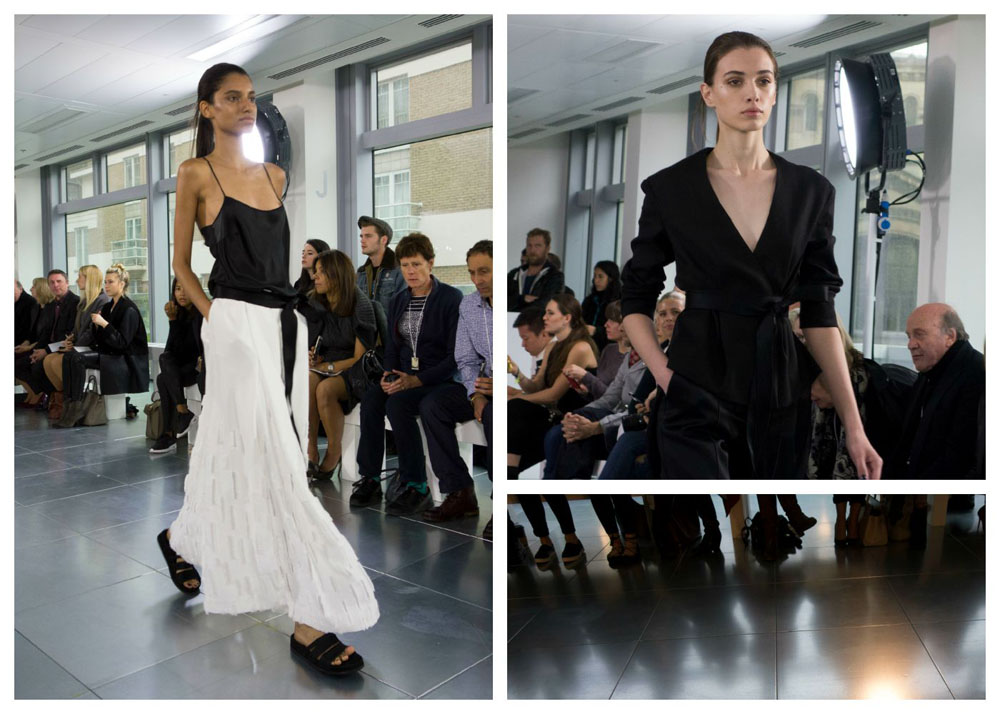 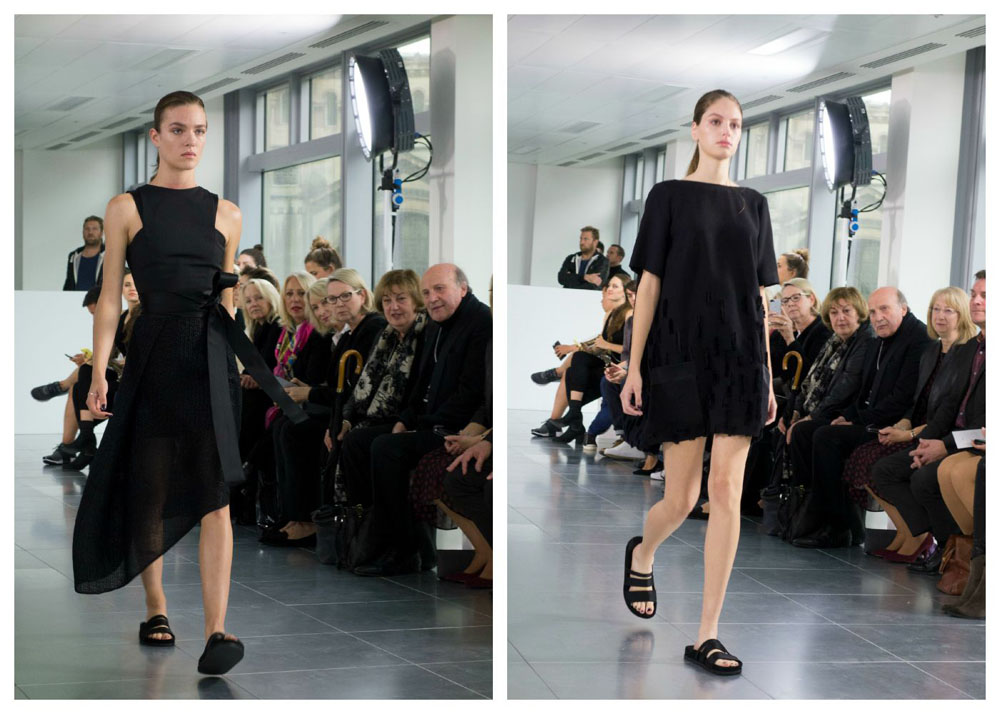 Monochrome tailoring in sharper cuts began to soften as more silk and tulle was introduced. The colour palette was contempory silver, navy, black and just a hint of pink. 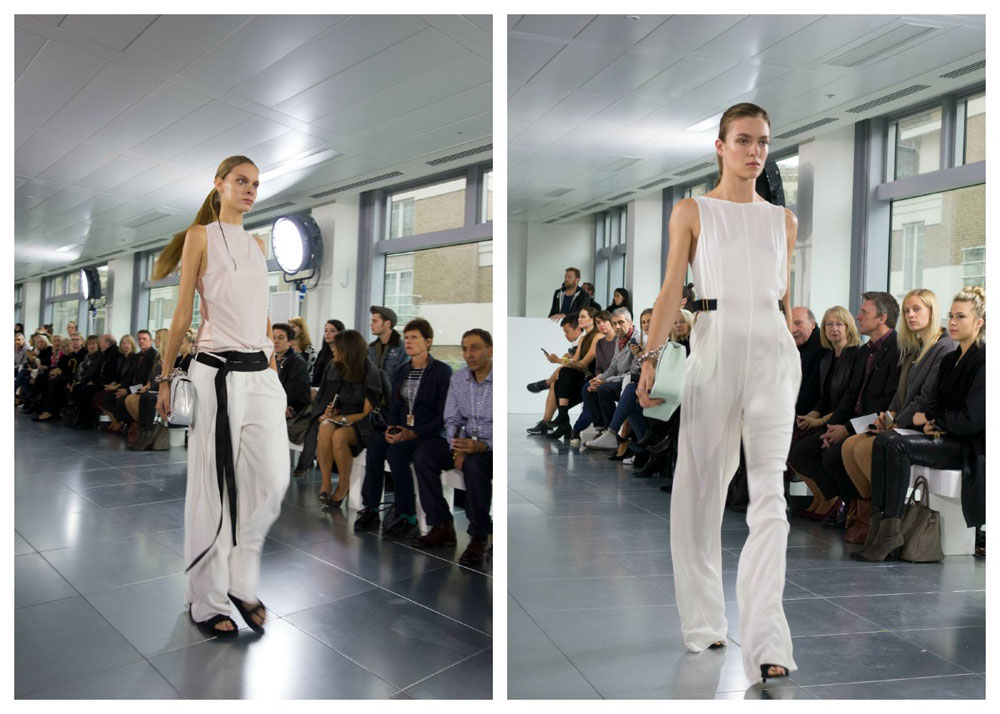 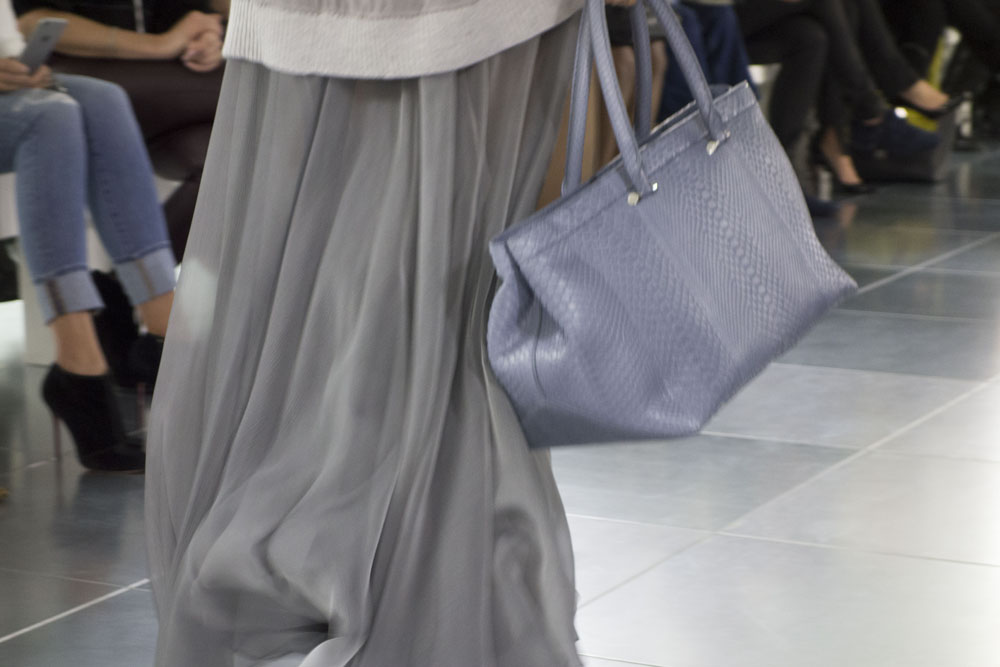 Words can’t really describe how beautiful it all looked in person. The fabrics swirled and swooshed as the models strode past, the metallics glinted in the light and the ethereal music only added to the ambience. The models had simple makeup – a healthy glow and hair pulled back into classic ponytails. 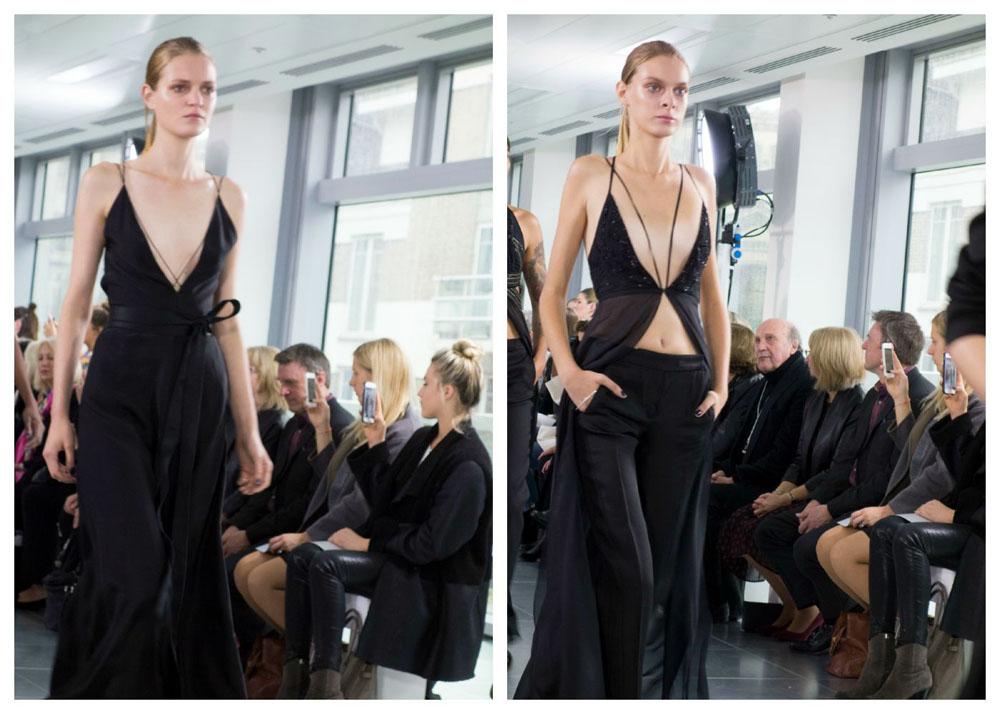 The back of the clothes were often as detailed as the front. 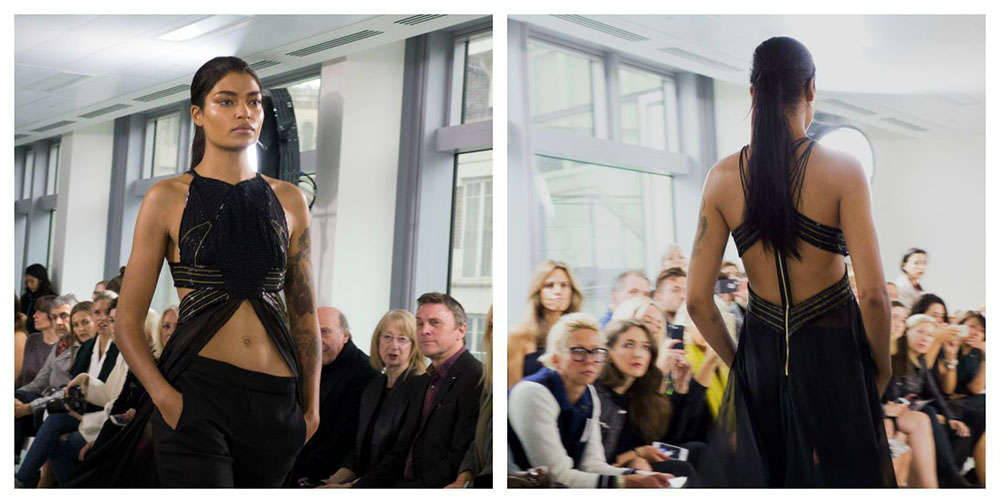 As the collection moved from day to evening wear the textures became luxe metallic, ribbon and flowing silks and I was officially in love. 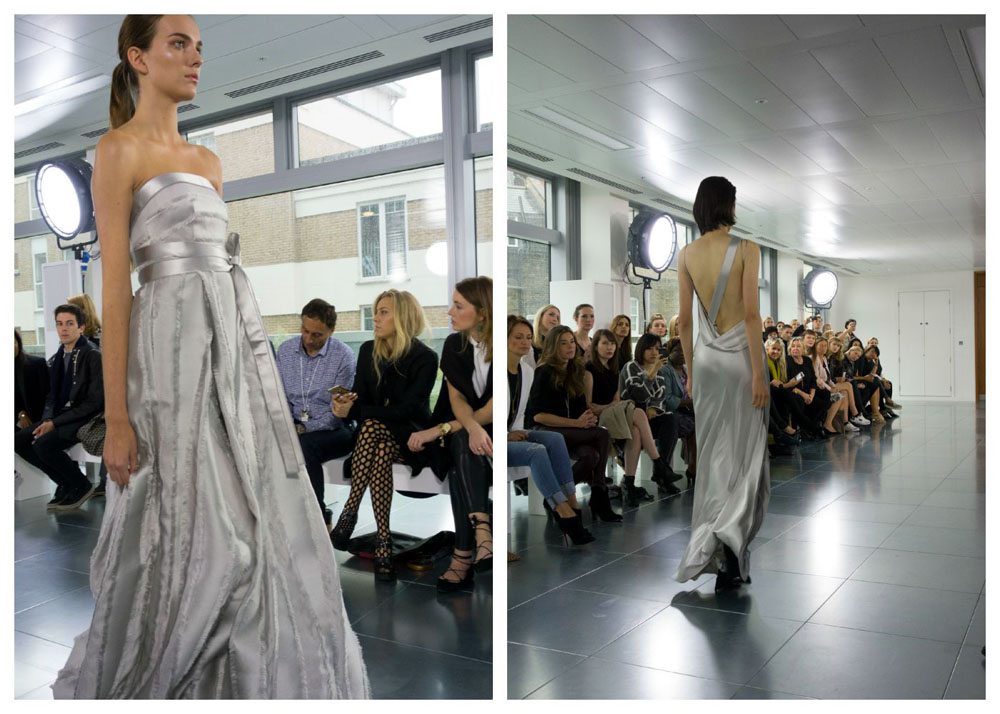 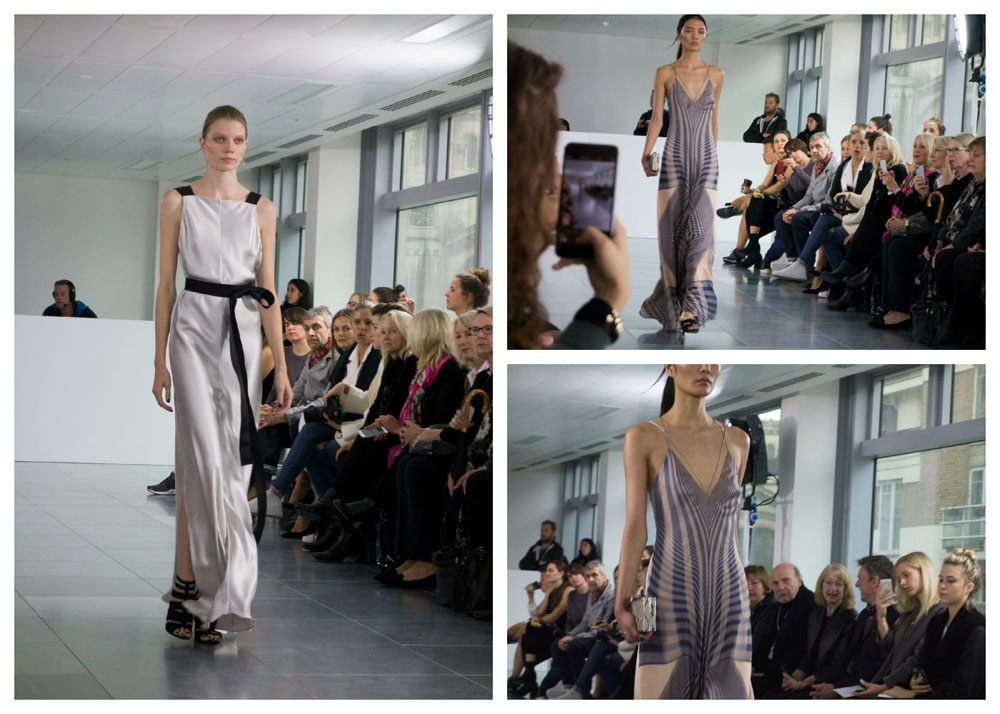 And my personal favourites: 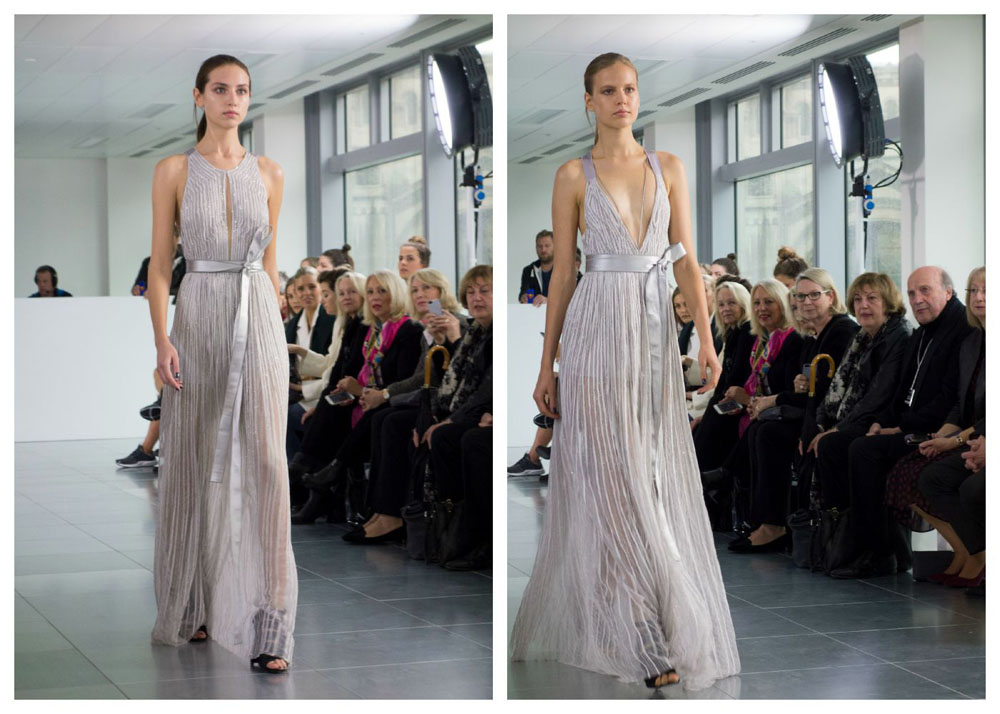 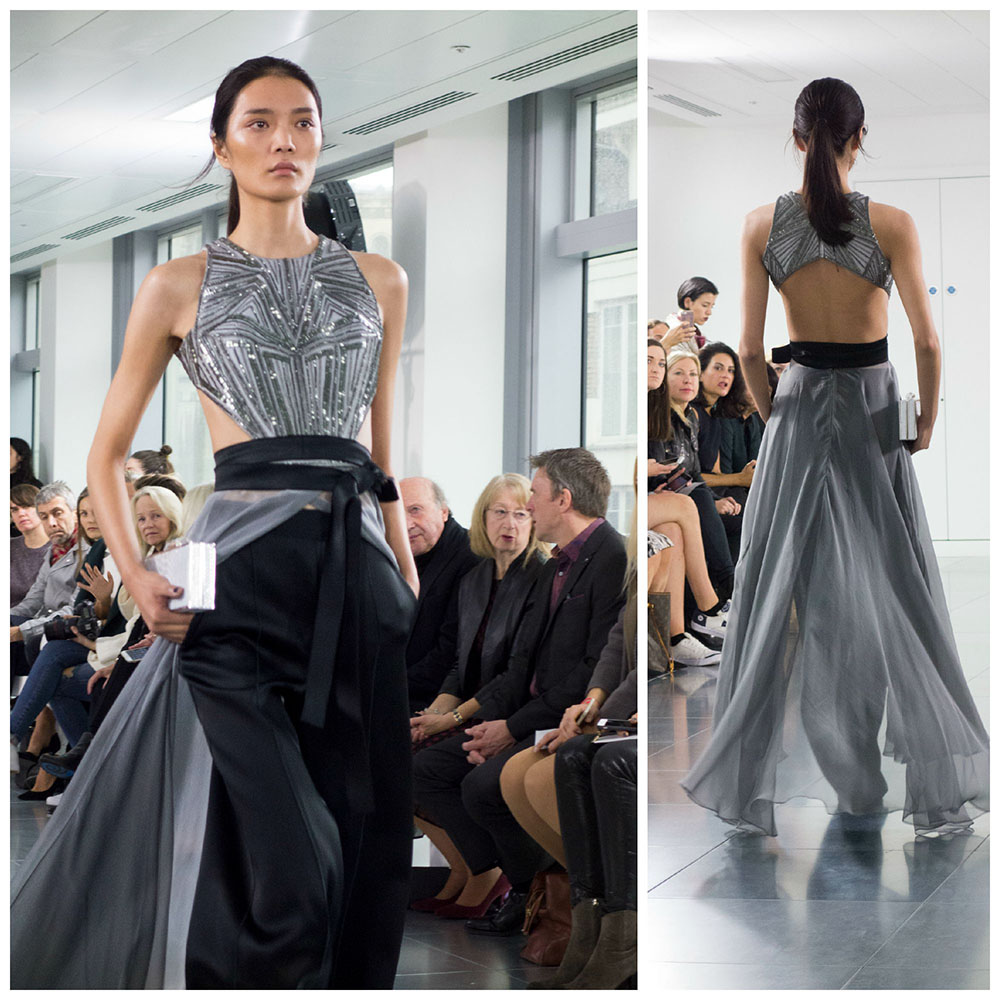 Whilst some pieces were clearly going to work better on six foot willowy amazonians rather than my five foot frame, most of the items were such a flattering cut that it was an entirely wearable collection overall. I’m very much hoping that the collection filters down onto the high street next season.

The models were all slim, but I didn’t feel that Amanda was promoting an unhealthy body image. For the most part they appeared toned and shapely. 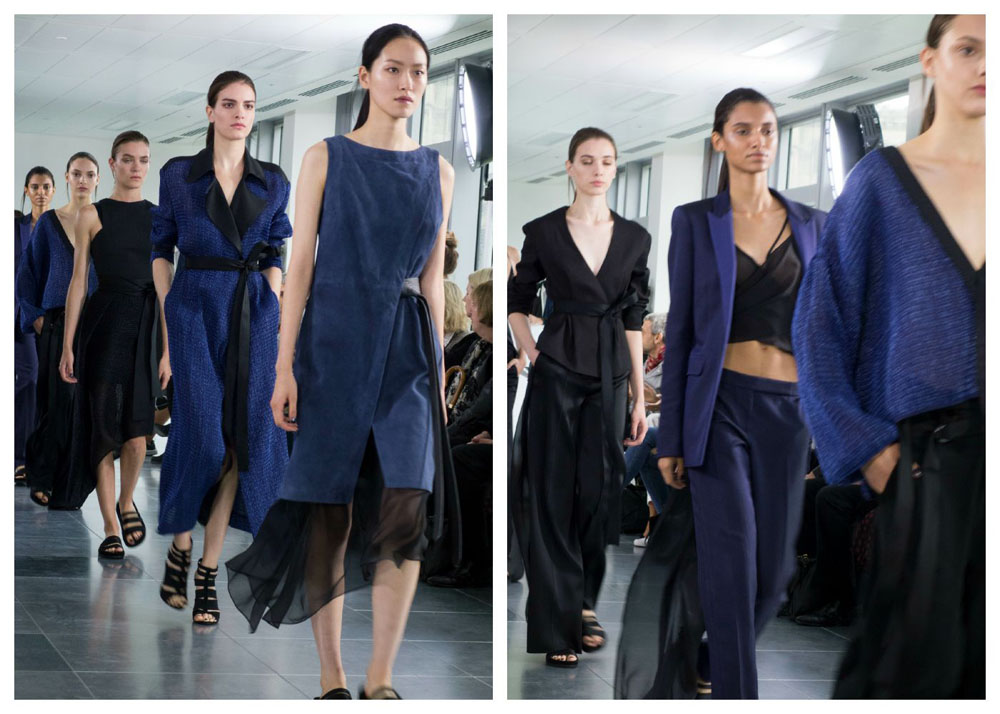 I rarely get to do outfit shots (seriously does every fashion blogger have a professional photographer following them around? Why doesn’t anyone take a fabulous shot of me crossing the road? I want to know their secret!) however as I was with Carolin, we hung back and took a couple of outfit shots for each other, before heading back out into Mayfair for a big bowl of pasta!

…so here’s my second ever OOTD! 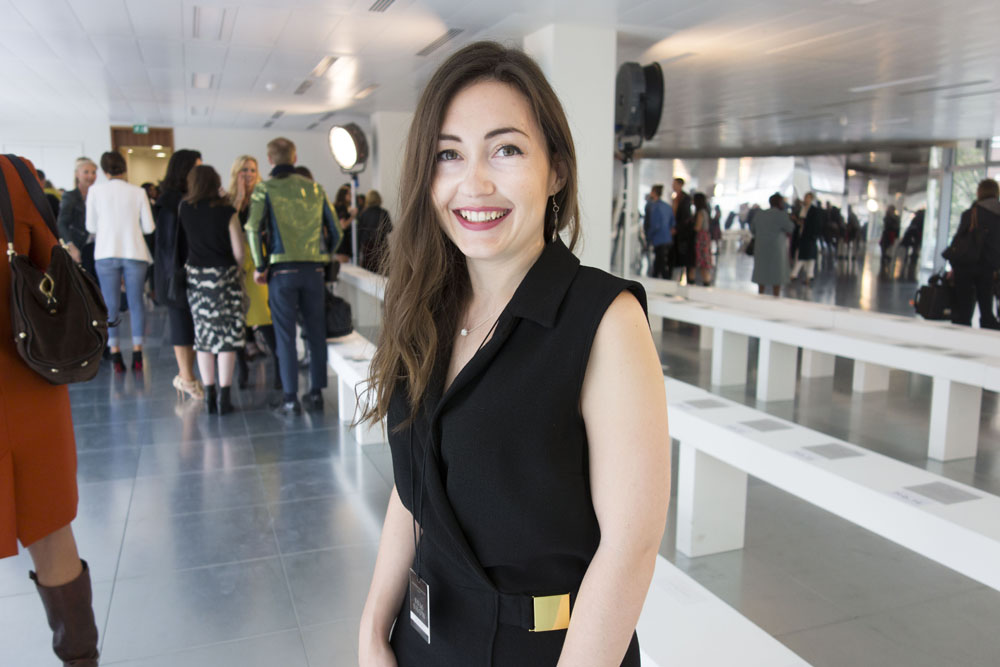 The comfiest suede Ankle Boots | Clarks | No longer in season, similar here for £80
Butterfly earrings | Gift from the Manchester Craft and Design Centre which hosts some fabulous boutiques

Farewell London Fashion Week, thank you for treating this nervous newbie so well. If I never get to see another show, I’ll be happy to have seen this one!
(But next year, who knows….??)

Thank you to everyone who voted for me in the Bloggers Blog Awards!