Date Night! | Magic and Cocktails at the W Hotel On a typical Tuesday night N and I can be found at home in Cambridgeshire on the sofa. I’ve usually got my head buried in my laptop until around 9pm whilst N reads a comic or watches Sky Sports; who says romance is dead? A few weeks back, however, we found ourselves on a date night at the W Hotel in London quaffing cocktails and anticipating the arrival of Oliver B, resident magician.

First off, let’s take a moment to talk about the W Hotel. It’s swanky! The kind of place that I probably wouldn’t have felt confident enough to set foot in if I hadn’t been invited along especially. There are bouncers at the entrance and a big echoing lobby with lifts that doesn’t give too much away of what’s in store upstairs. 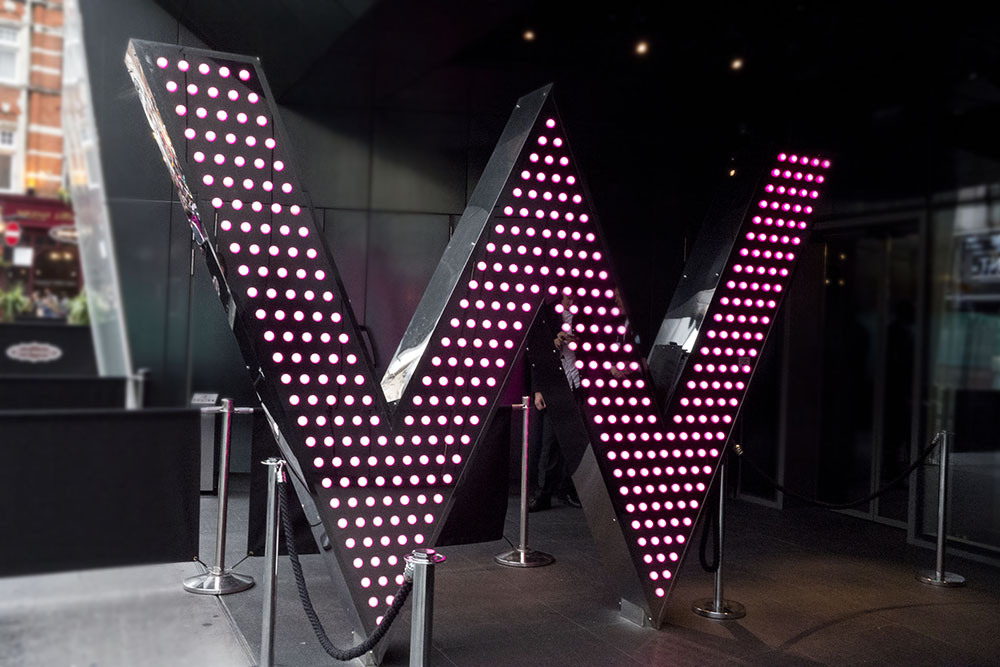 Apart from the mirror balls. Oh those mirrors balls… 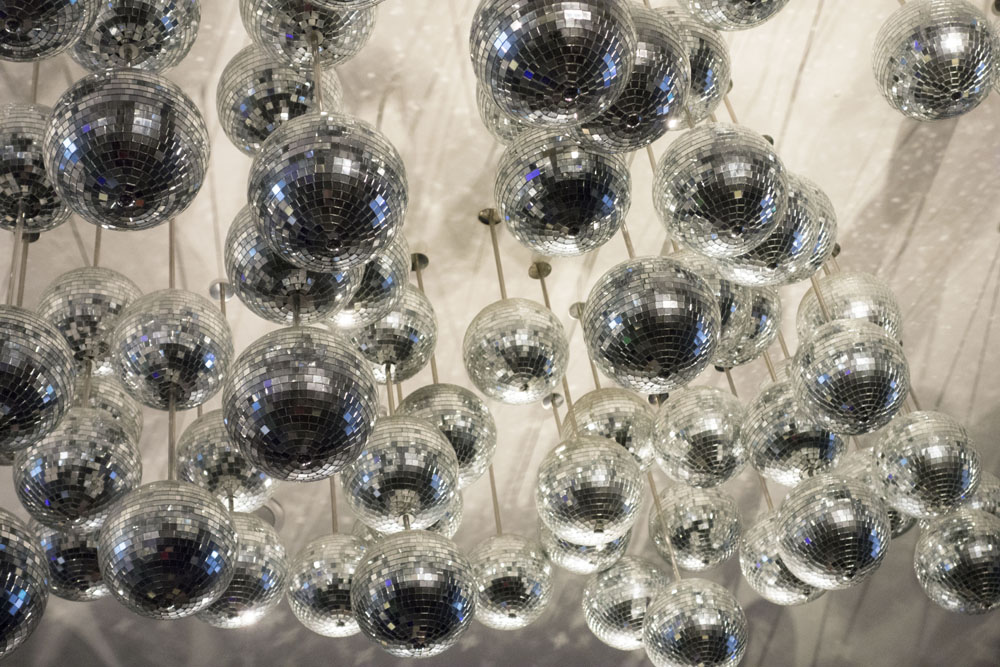 Picture me in the very quiet lobby with my camera out taking pictures… I have no shame!

We rode up to the Wyld Bar on the next floor and settled ourselves down on one of the large leather sofas by the bar. The room has a sophisticated ambiance and I was glad that we’d dressed up for the occasion (myself in a dress and heels, N suited and booted). There were these gorgeous glass paneled fires which looked uber cool as they flickered under the mood lighting, but did seem a little overzealous in the humid August weather. 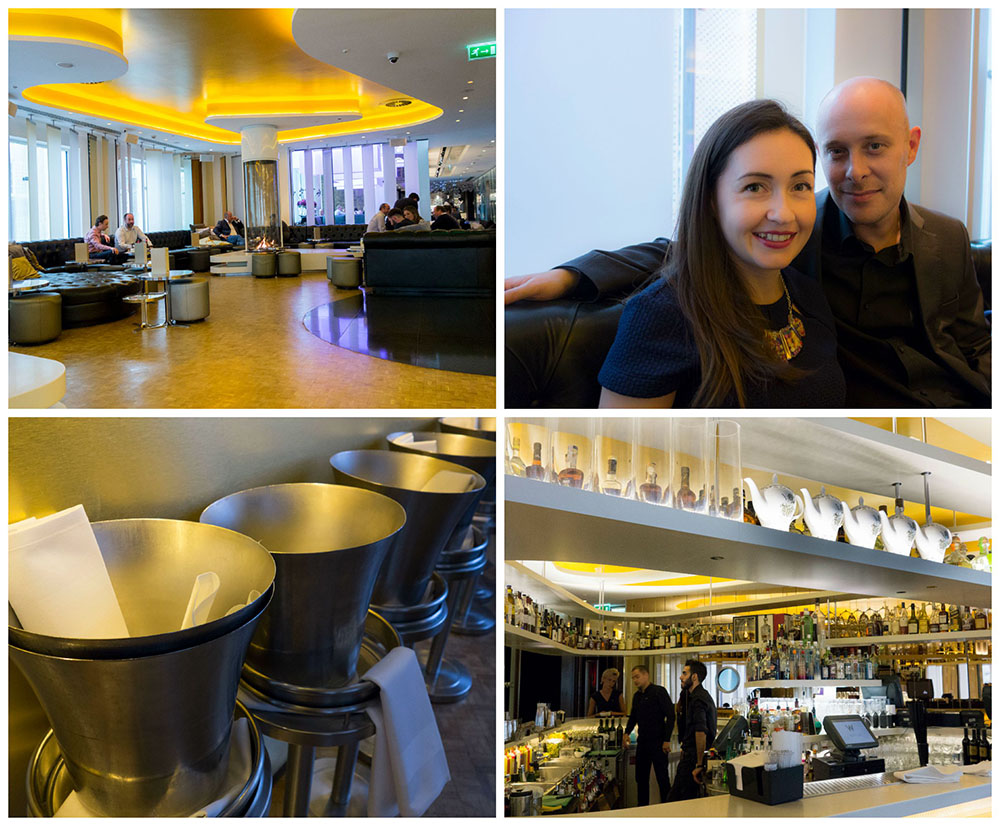 The cocktail menu was huge and I had a hard time choosing a drink, but opted for the ‘Lemon Lush’ which was every bit as delicious as it’s name suggests. I wasn’t quite sure what to do with the giant lemon grass decoration however and ended up discreetly disposing of it! The cocktails at this place aren’t cheap – around the £13 mark, but for a special treat on date night it’s worth pushing the boat out. 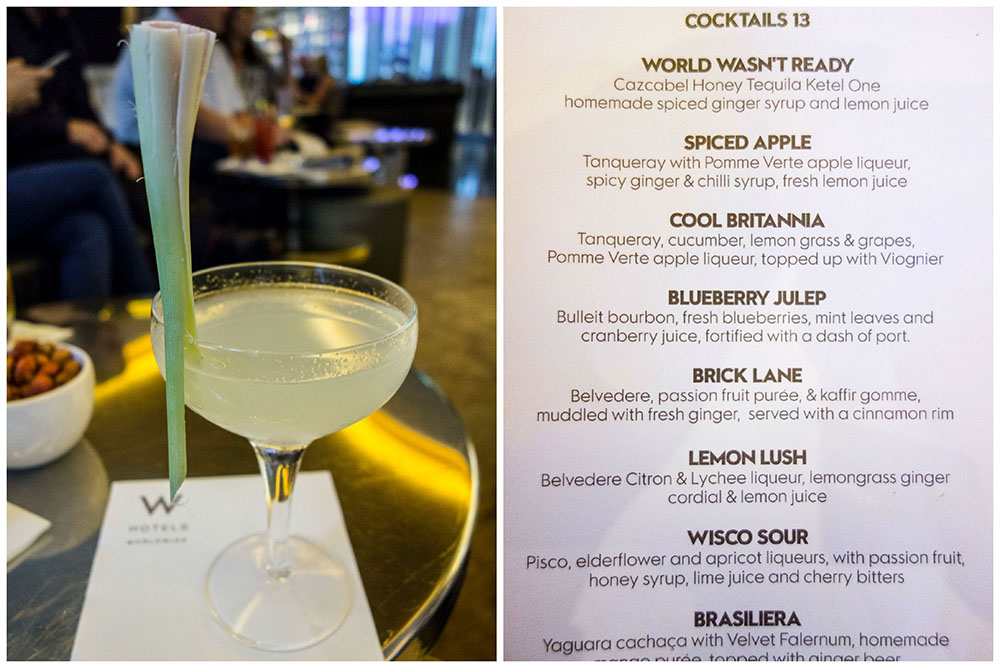 The trendy vibe continued throughout the decor with the most awesome collection of plates aligning the dividers between the seating areas. I was much more excited by these than N, clearly only only one of us has a passion for fashion. LOOK at the plates though, aren’t they fabulous? 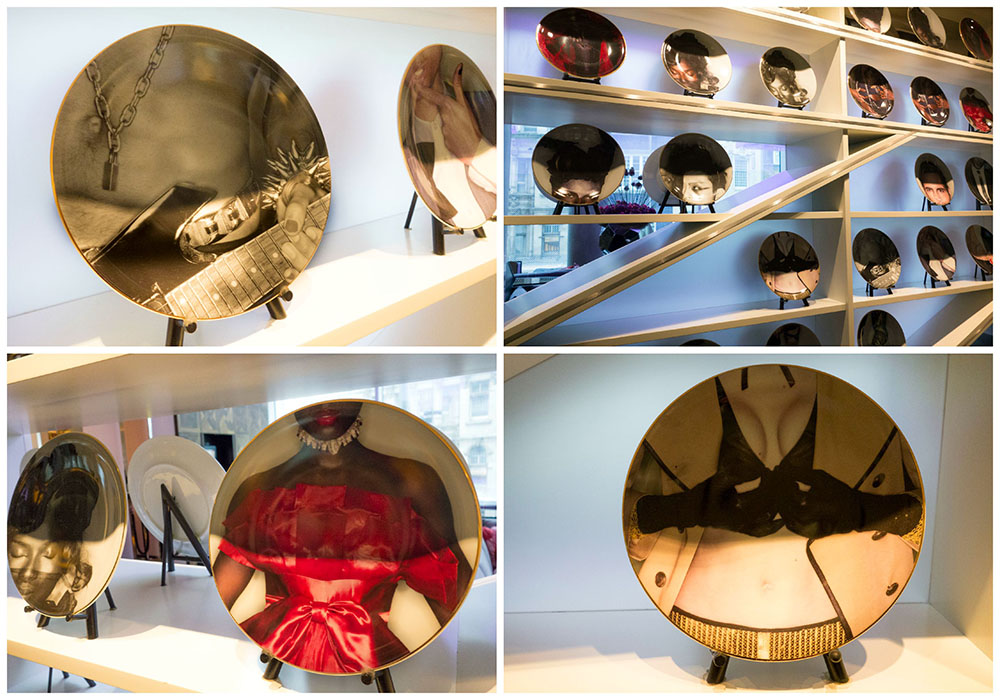 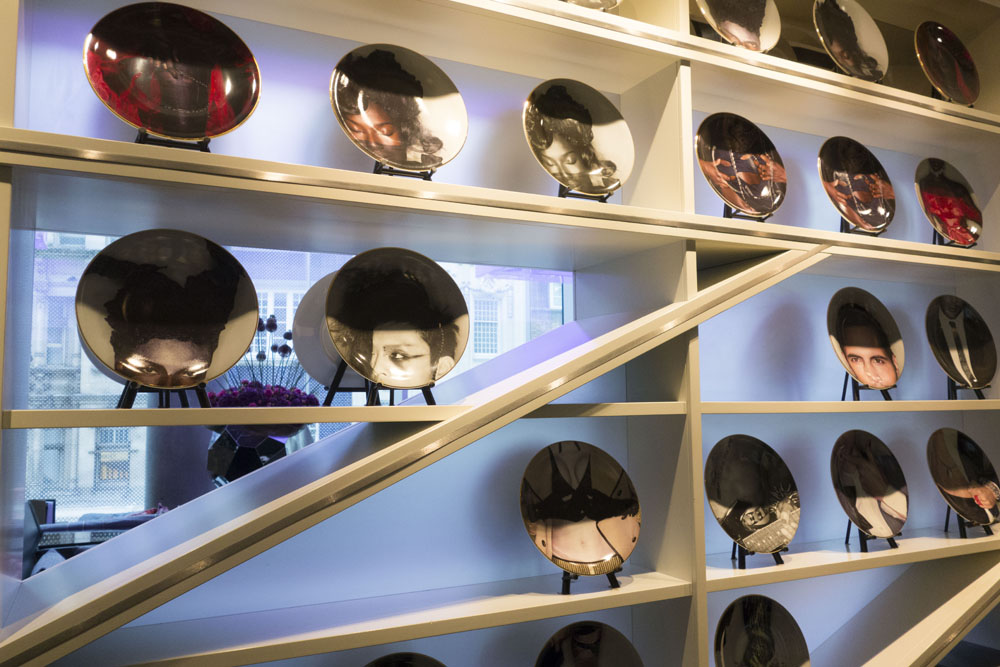 The main reason we’d been invited to the hotel, of course was not to wax lyrical over the plates, but to see Oliver B perform magic. He’s there every Tuesday from 7-9pm making his way from table to table to put on up close and personal shows for the patrons.

The rest of our party arrived and after sharing our thoughts on the cocktails we’d all chosen (which appeared to be the same in each case: OMG yum!) he arrived at our table to introduce himself. Although he’s a big hit with the celebs (you can view his highlight reel here!) he has a very relaxed, engaging way about him that immediately hooked us in as he launched into his performance.

Oliver B specialises in close up magic, mostly with cards but also money and other small objects. I’d sit it alongside David Blaine’s street magic or Dynamo, but it’s not really fair to compare him directly as he has a style all of his own. It helps that he’s very dapper with a perfectly fitted suit and has quite the London boy charm (don’t tell N I said that!)

We watched in rapt attention as he performed trick after trick that left us gasping and squealing and wondering if our eyes were playing tricks on us! I could feel us all leaning closer so as not to miss anything.

With a flick of his wrist a piece of paper suddenly turned into a wad of twenty pound notes before our eyes. The signed, torn corner of a playing card never left our sight as he placed it in someone’s hand and they tightly wrapped it in their fist. A quick tap and the paper disappeared, only for Oliver B to ask if someone would kindly look in the deck of cards that had sat in full view in front of us all night. Of course what was in there but that same scrap of card! 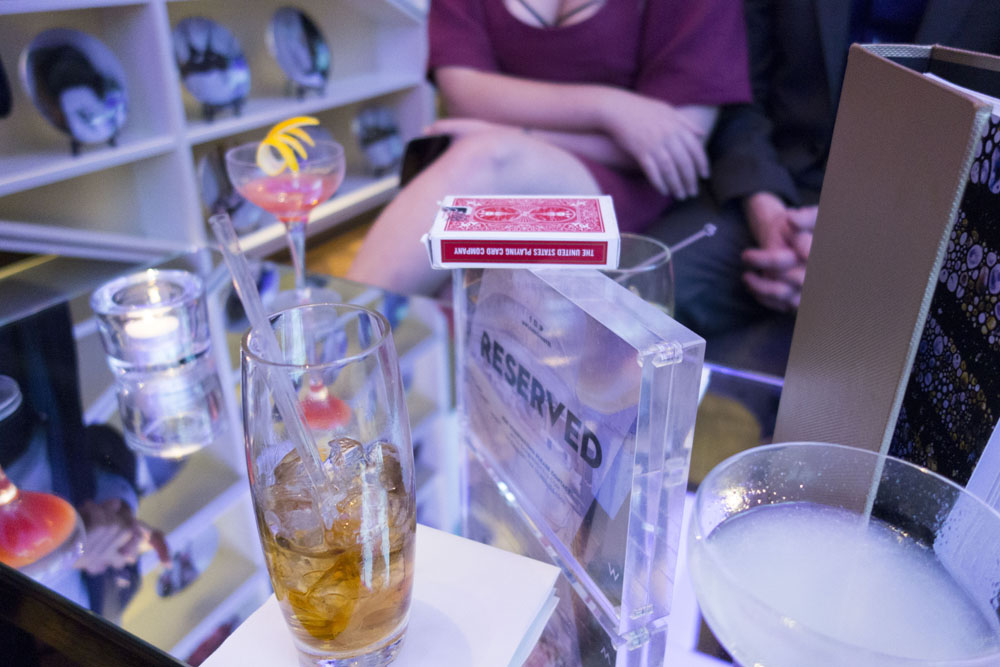 I won’t go into the whole performance as you really must go and see it for yourself, but suffice to say it’s something you’ll be thinking about for ages after as you try and make sense of how he could possibly have done it! Not only that, but he had us laughing along with some of his quips too, he’s a natural entertainer. 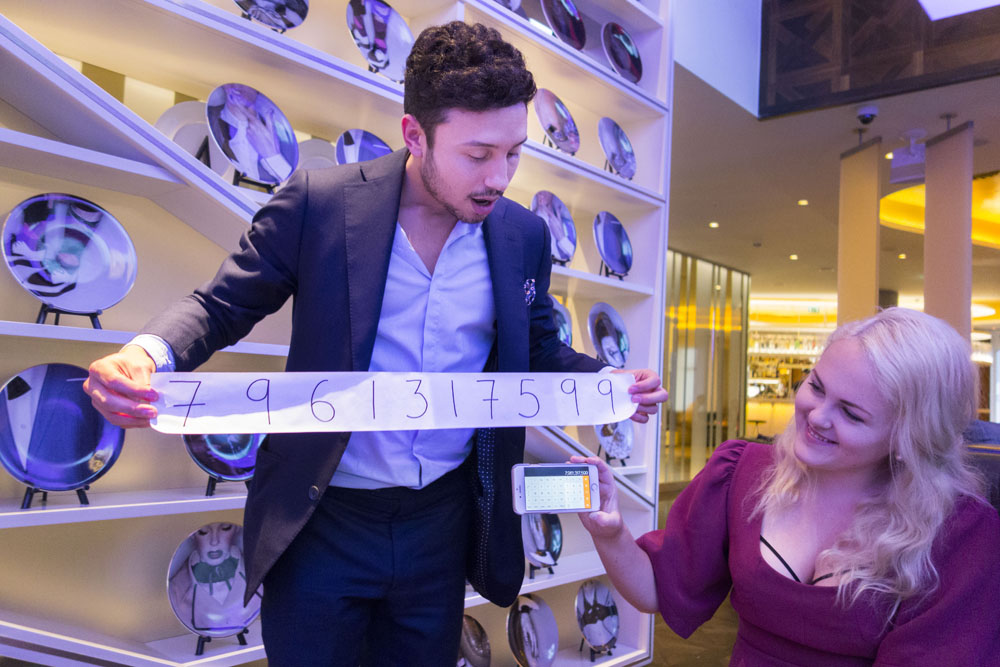 After the performance he pulled up a chair and was happy to answer our questions:

Has he always loved magic? No, he discovered it early in his twenties and found out that he was good at it, so kept practicing and practicing until he was brave enough to perform publicly.

What happens if a trick goes wrong? Well as a seasoned magician he usually has a ‘get out’ to recover the show, but in one of his first ever performances he does remember the awkward silence when it all went horribly wrong and he had to say ‘moving on…!’

Does he ever use it as a chat up line? A cheeky smile at this one and a confession that it HAS worked in the past, but now he has a girlfriend, so instead he practices his new stuff on her and his mum!

His pet peeve? People asking him to do magic as soon as they find out he’s a magician, so he never gets a night off. “You wouldn’t ask a bank manager to count your money for you at a family barbecue, would you?”

I must say I thoroughly enjoyed the show and highly recommend a visit if you’re out for drinks with the girls or on a date night, it’ll certainly give you something to talk about!

Please vote for me as the Best Up & Coming Lifestyle Blog.