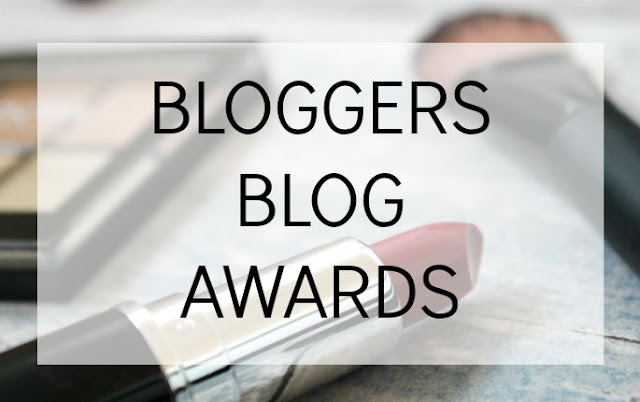 Well what a week it’s been so far!

On Monday I was working scrolling through Twitter on my lunchbreak at work when the @ sign popped up to notify me that I’d been mentioned in a new tweet. I opened it up and reread it over and over again, because I couldn’t quite comprehend what it said.

Yes that’s right, my little blog has been shortlisted in the 2015 #BloggersBlogAwards!

Let me explain. Tea Party Beauty spotted that Company and Cosmopolitan didn’t appear to be running their blog awards this year and so decided to create her own version. The concept started small, an award for bloggers BY bloggers, but once out there it took off in a BIG way. Over 500 nominations were made and then 5 in each category were shortlisted. You can read the full story here.
I had heard about the awards but only thought of them in terms of who I’d nominate, it never even crossed my mind that I could be nominated myself. Let’s face it, my blog is a tiny little one compared to the thousands of awesome blogs out there!

That’s why when this tweet came through I sat at my desk in total shock. I began to shake, then I started to get teary as I thought about how people must have taken the time and effort to nominate me, and that they didn’t even tell me which means that they didn’t it without any thought of thanks or credit for themselves. 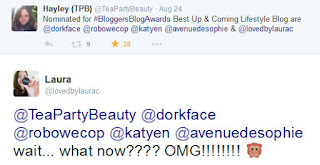 What’s more, the four blogs I am shortlisted with are some of my absolute favourites that I read each and every week. They inspire me and I have aspired to reach their level, so I’m incredibly amazed and proud just to have my name mentioned in the same sentence as them.
That evening was a bit of a blur. I was going out in London the following night straight after work so I was rushing around getting everything ready. I didn’t get a chance to sit down so I ended up doing my first ever Periscope broadcast whilst cooking my dinner. I was THAT excited! As it turns out, lots of lovely bloggers I knew came on to watch it so that was pretty awesome… even if I did go bright red in the face as soon as it went live. #embarrassing
It wasn’t until Tuesday evening whilst on the train to London that I had time to take a breather and properly read through all the details, which is when it dawned on me that we’ve all gone into a public vote. I’d gotten so carried away with the fact that I’d been nominated and then shortlisted that I’d completely forgotten that someone wins an actual prize at the end of it!

So that’s my big news! I really hope that this doesn’t come off as braggy or anything, I know that there are so so many talented hard working bloggers out there who deserve this recognition just as much. I’m just so flipping chuffed that I could burst and had to share it with you and say a big thank you too.

I can’t put into words how much it means to me, but emojis always help:

….that includes YOU Lolaandbehold (who admitted she’d nominated me after seeing this tweet…she must really want one of my awkward hugs!)

So what does all this mean? Well there’s an awards ceremony on the 3rd October in Leeds and as a shortlisted nominee I am invited as one of the guests of honour. I’m not sure if you can buy tickets for the event but I read that people who voted will be randomly selected to attend, so I’m excited to hear who else is going – I’m thinking pre-party and after-party!
I shall be practising my best ‘gracious loser’ face…

…whilst trying not to look like an overwhelmed groupie as I hang out with all the other fab nominees.

A group of us have decided to stay in Leeds for the night so I can have some cocktails too – yippee!

How YOU can get involved

You can vote for your winner in each of the award categories (the form is at the bottom of the post).

It would be lovely if you could take a minute to show your support whether it’s for me or for the other lovely ladies. These awards are for bloggers, by bloggers, so let’s all share in it and make this such a big success that it becomes an annual event. Wouldn’t that be great?

…and who knows… next year we could all be voting for YOU!