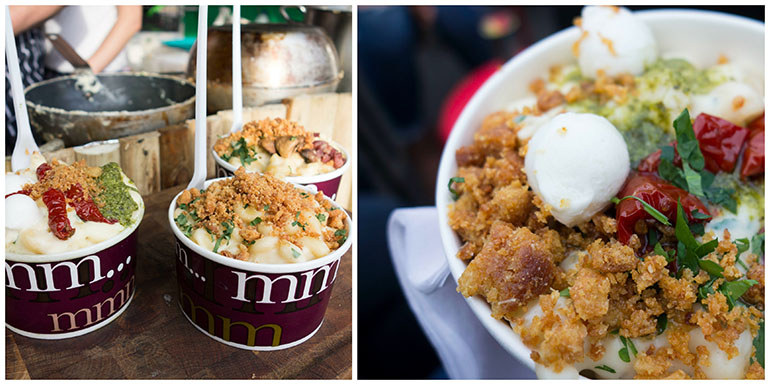 On Saturday I met Lauren at Liverpool Street and we hopped in a cab to take us the short distance to Shoreditch High Street. On our way we saw at least 10 police cars fly past, sirens blazing. I can only assume that it was to do with the protests happening in the capital after the General Election. We had altogether different plans however: The Urban Food Fest!

The Urban Food Fest is a street food and bar market held every Saturday night. The venue is a Euro Car Park but you’d never tell on a busy Saturday night, as it is transformed into an open air foodie wonderland.

Around the perimeter are 15 food stalls (there’s a different selection each week) offering gourmet street food from around the world. In the middle are tables and casual seating and live music and entertainment goes on throughout the evening.

I soon spotted Fran whom I’d met at the Chocolate Making Workshop a few weeks ago and we headed off in search of food. Somehow we ended up at the bar instead ordering a glass of Prosecco… however did that happen? 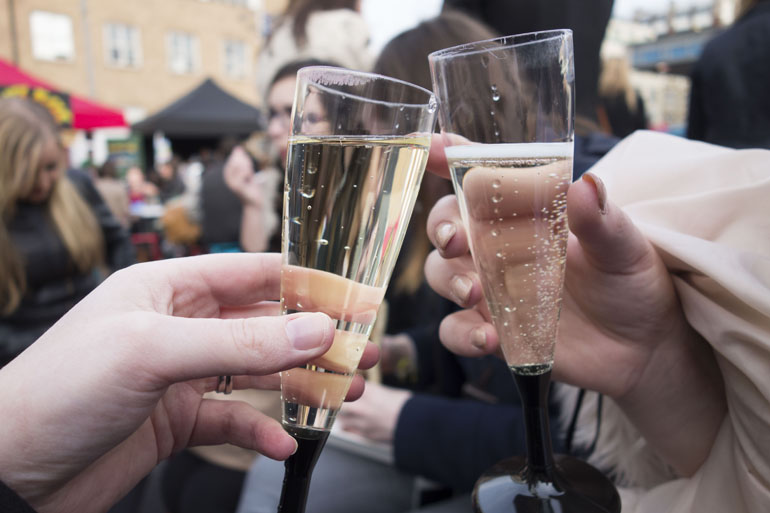 A glass of the fizzy stuff set us back £6.50 each which we justified with a knowing shrug to each other that said “well it IS London!”.

We found the rest our party guarding the seats they had saved for us like their lives depended on it! A tip: if you want to sit down to eat your food then you need to get there early or be prepared to wait a while as it gets very busy.


The delicious smells and sizzling cooking sounds wafted through the air enticing me to each stand in turn. 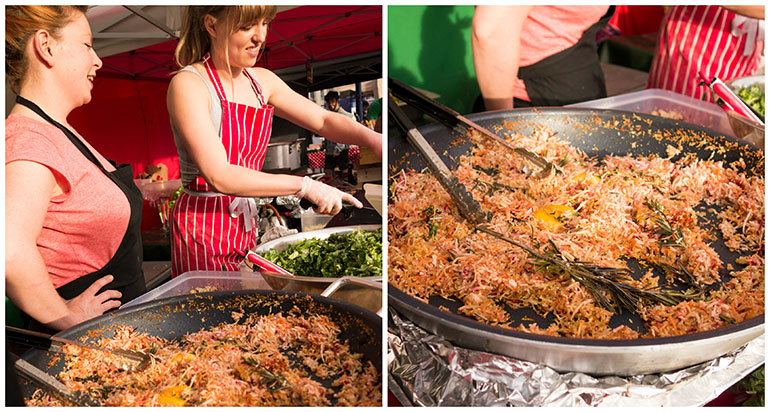 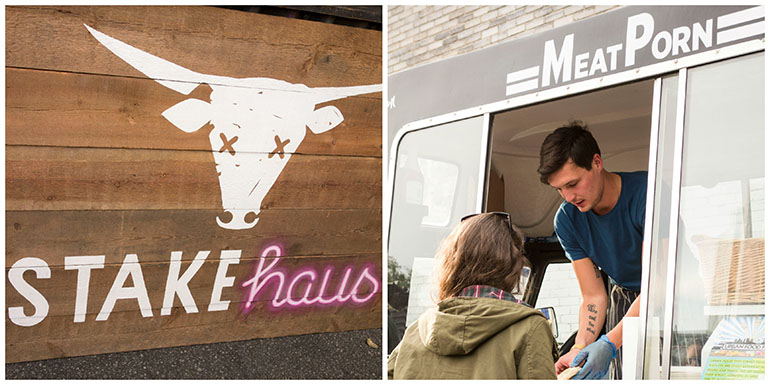 Succulent pulled pork baps were a popular choice amongst our group along with the hot dogs. 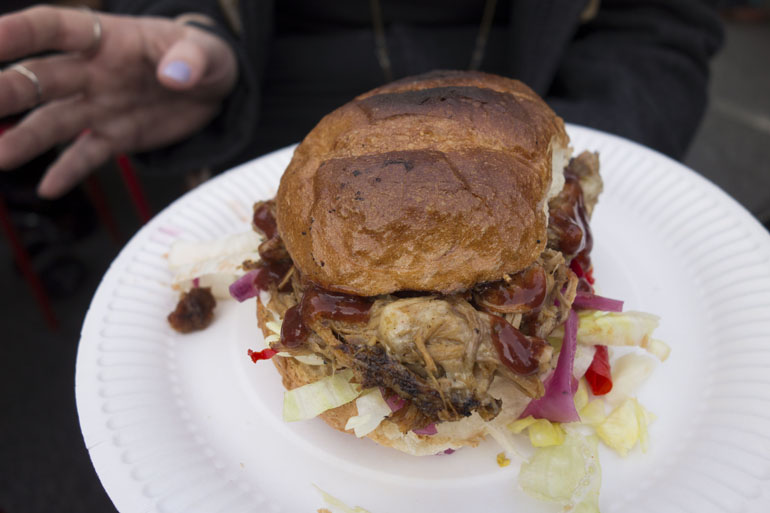 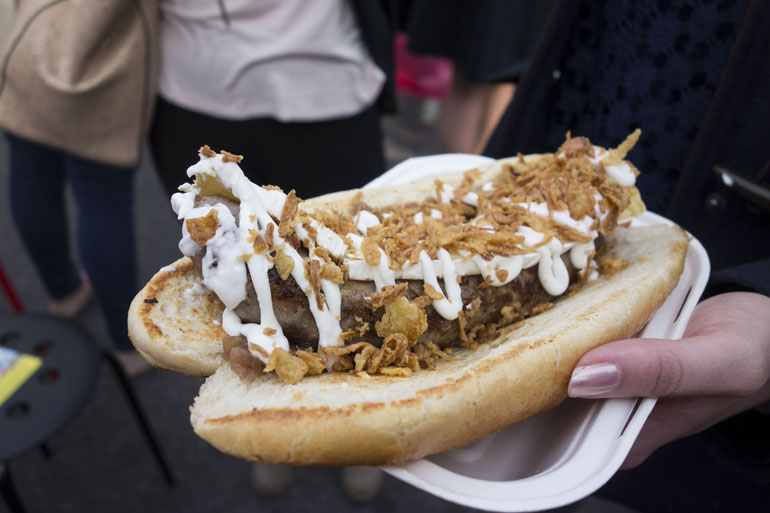 There were options for vegetarians too and even a paleo street food truck. 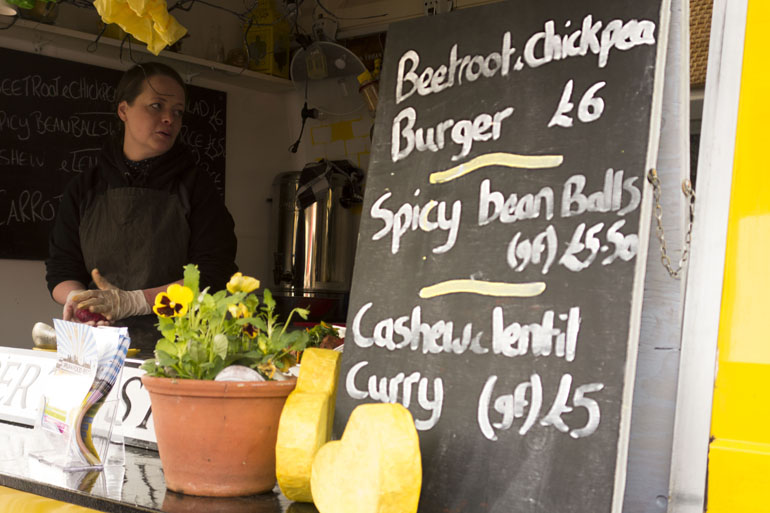 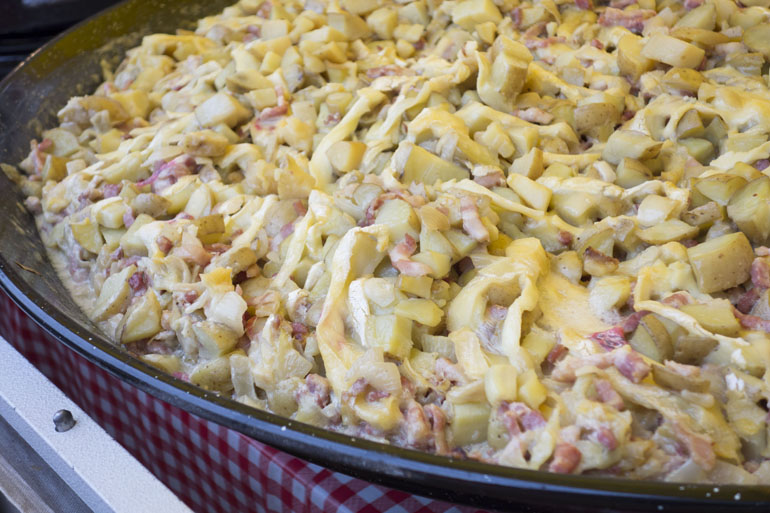 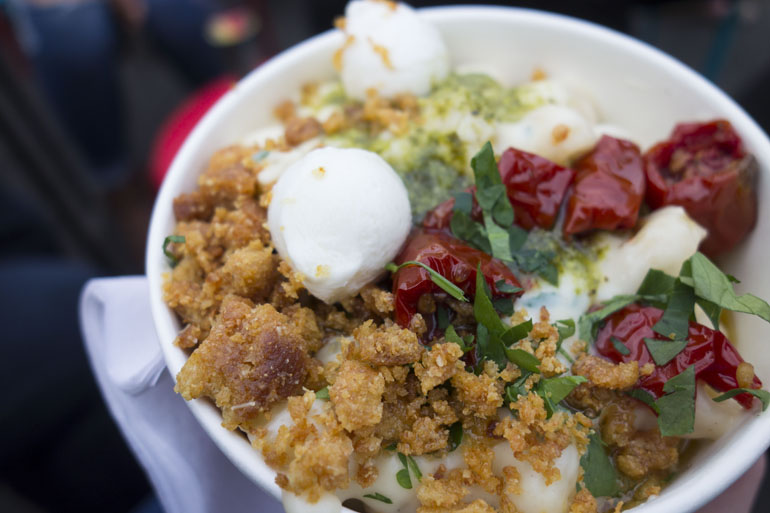 Oooh the rapture! Oozing decadent rich cheese sauce, little pockets of pesto, the crunchiest, tastiest croutons I’ve ever had, sweet sun dried tomotoes and light mozzarella balls. I was feeling full after half of it, but kept on eating anyway. Whoever thought, “hmm Mac ‘n Cheese is great, but what about adding pesto to it?” is a genius!

Anyone for cheesy chips? Or what about crepes… with nutella! 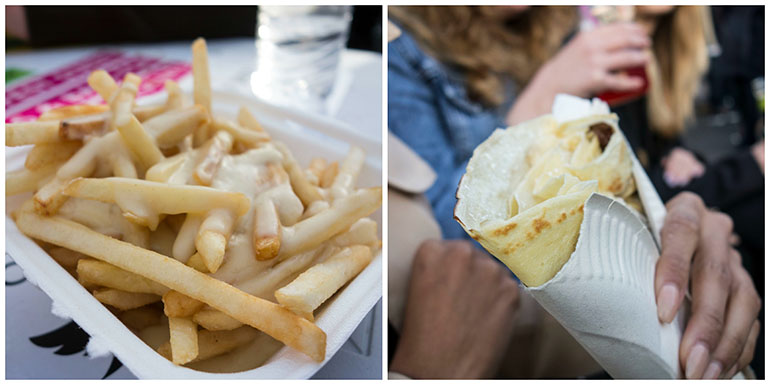 As we ate we listened to the live musicians and then some kind of psychic act came on. I have no idea if he was any good or not because we got a little bit distracted by Jenny’s selfie stick at this point! At first you feel self conscious, then you realise half the crowd behind you are trying to get in on the photo too! 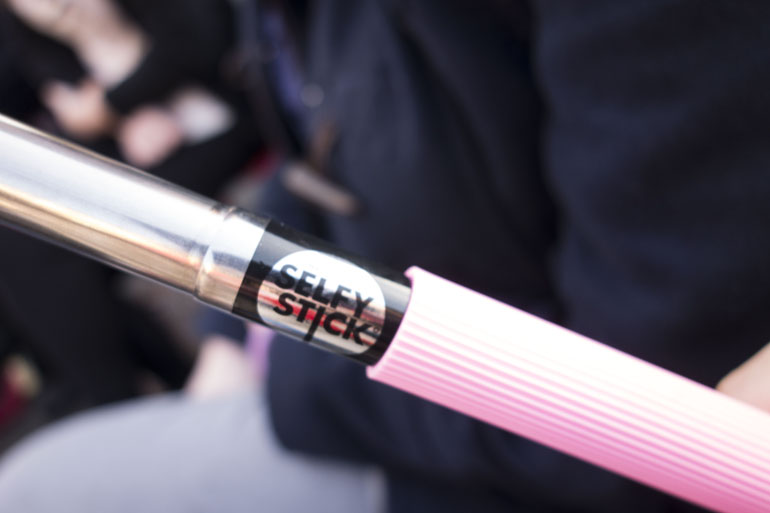 The ‘it’ drink of the night was Vardy’s Moonshine – a strawberry and basil alcoholic concoction which looked amazing and tasted just as good. 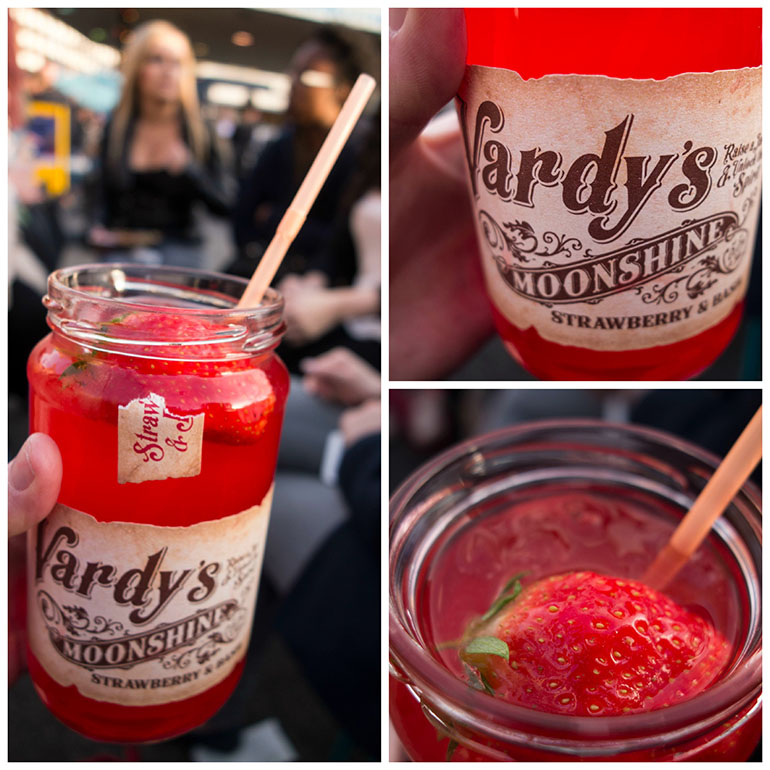 The standout performance of the night was from a man who introduced himself as a ‘juggler’ and explained that he was going to fill in for 5 minutes whilst the next musician got set up. He produced a glass ball and proceeded to mesmerize the entire audience with a hypnotic piece of dance art in which the ball seemed completely weightless. I could happilly have watched for another hour, but true to his word after 5 minutes he took a quick bow and exited stage left!

It was such a lovely relaxed evening.  What had threatened to be a miserable wet day turned into a dry mild evening and the sun even made an appearance, prompting us all to reach for our sunglasses. I’m not sure what it would be like on a cold wet night in January, but on a day like ours the open air venue comes into it’s own. We only started to get a bit chilly after sitting around for a few hours. 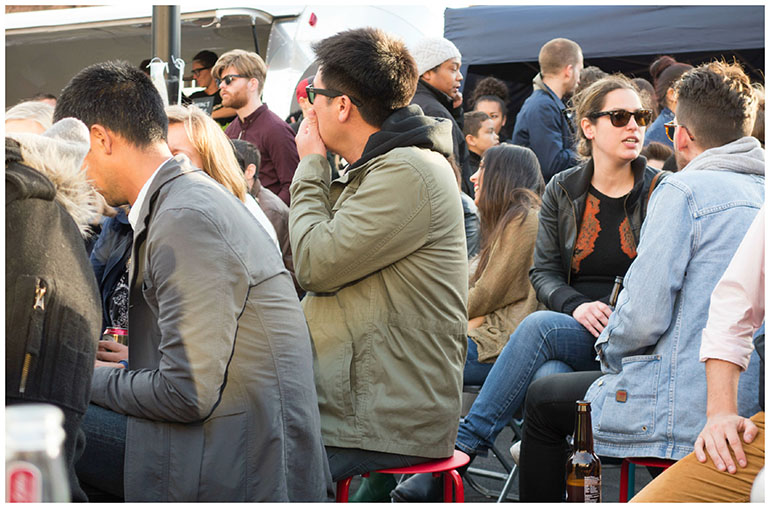 The Urban Food Fest runs every Saturday night at the Euro Car Parks Shoreditch with free entry from 5pm to midnight. You’ll also find one at the Euro
Car Parks Deansgate in Manchester from midday to 9pm, again with free entry. Food costs around £5 to £10 with a premium drinks bar on tap too. Food stands are cash only but there are plenty of cashpoints in the area, just make sure you stop at one of them en route!
You can find out more at http://www.urbanfoodfest.com/.
Thanks go to Jessica Tucker, the founder of the Urban Food Fest who welcomed us to the event and allowed us some premium seating for the evening.
The After Party
Still buzzing from our fun night out, we decided it wasn’t quite time to leave and that a cocktail was in order! We headed to Dirty Martini, Bishopsgate which is directly opposite Liverpool Street Station. 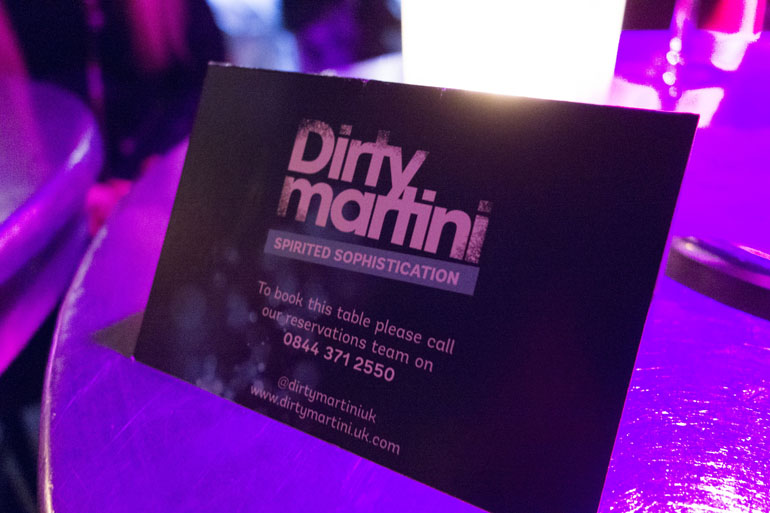 We were there quite early, about 9pm. It was busy but not heaving and we were able to get a table quickly. There’s a great selection of cocktails to choose from which are mainly priced at around £9. 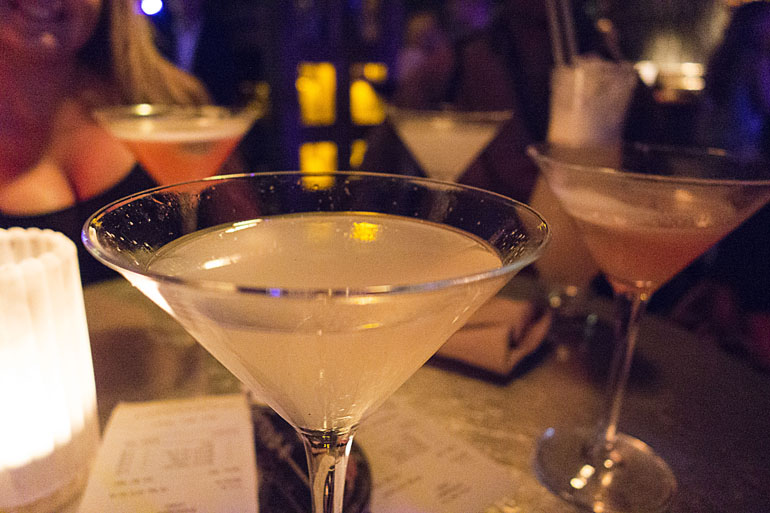 I choose a lavender and honey martini and watched as it was meticulously made.

They obviously put a lot of care into mixing the cocktails to get the flavours just right. The only thing I’d say is that for this reason it took ages to make each one of ours, so I can imagine that the bar gets pretty crowded later on if all drinks take that long to make.

As we enjoyed the music I looked at my watch and realised I was incredibly late for my train, so with a quick round of goodbyes I was forced to leave everyone at the bar and rush off.
I missed my train by 2 minutes and had to wait for the slow train… but it was worth it!
Thanks to Lauren and Jenny of @ldnmeetup for arranging such a brilliant chilled night. Until next time ladies!!