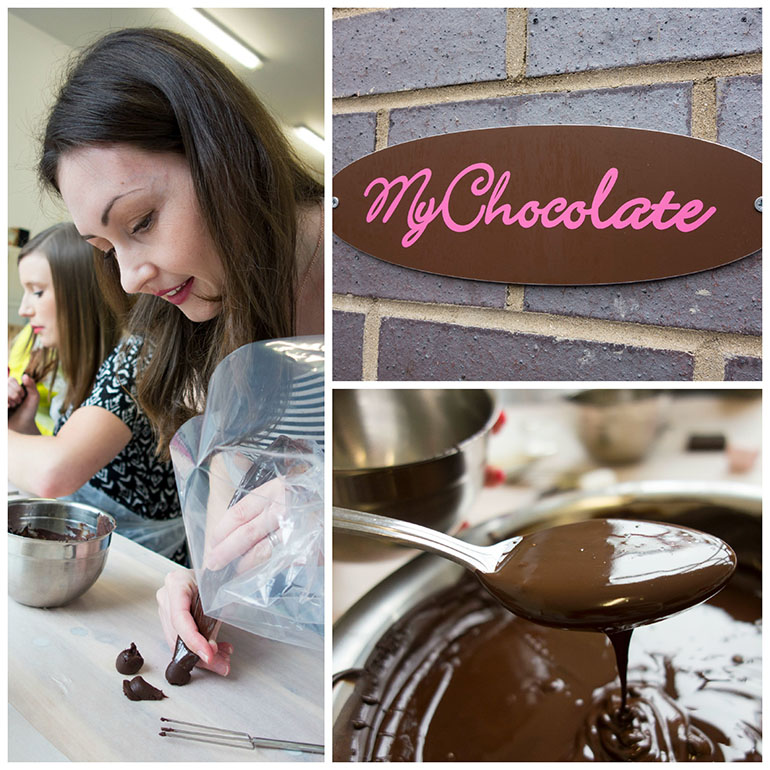 Last Sunday I arrived at Kings Cross with an hour to spare. I’m usually always in  hurry trying to get to the next
place for a certain
time so I can’t tell you how good it felt to be able to stroll down the platform for a
change, in no rush to get anywhere.

Grabbing a table for one in Giraffe, I watched the people hurry by outside as I tucked into a waffle smothered in natural yoghurt and honey. Strawberries gave it a bit of tang and it tasted as
good as it looks! 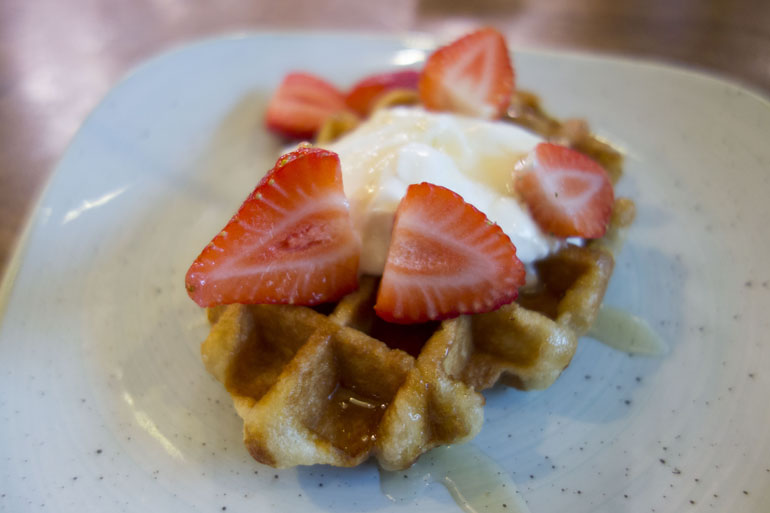 I met the girls at Angel station, where we all
stood around trying to work out how to get a taxi! I always assume
that there will be one around every corner in London, but not so at
Angel apparently.

Eventually we flagged one down and arrived at the MyChocolate kitchens (closest tube stop: Old Street) which look out over Regents Canal.

@LDNMeetup had organised an exclusive chocolate making class for our 30
strong group. Many of us knew each other from other blogger meets or after a long time chatting on Twitter, so it was great to be reunited with my blogging buddies and to put some new faces to names too.

Pippa was there and filled in some of the blanks from Friday night’s boat party (from which I have now found some truly hilarious drunken selfies that we took on the tube on our way back!). 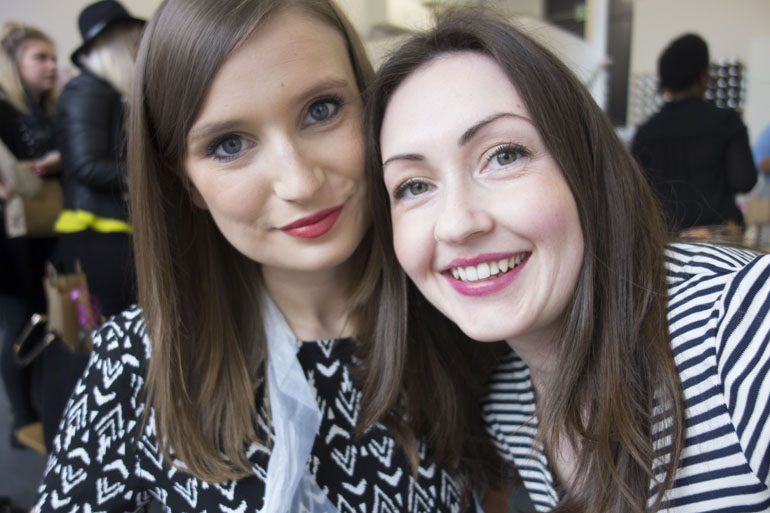 Our workbenches were neatly laid out with everything we would need: marshmallows, fudge, chocolate, a variety of sprinkles and silverware. 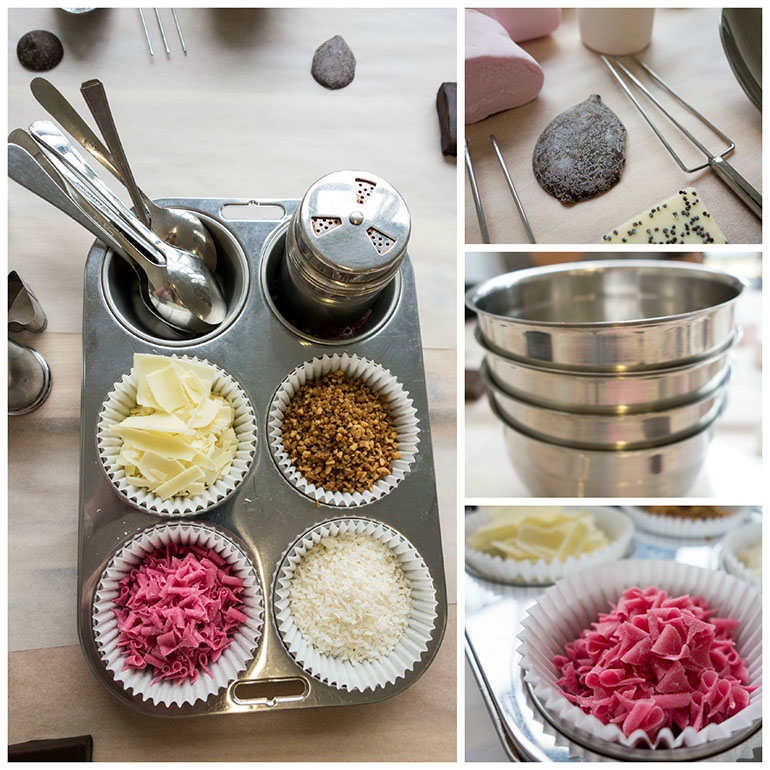 We couldn’t resist eating some of the marshmallows off of the forks before the class had even begun! 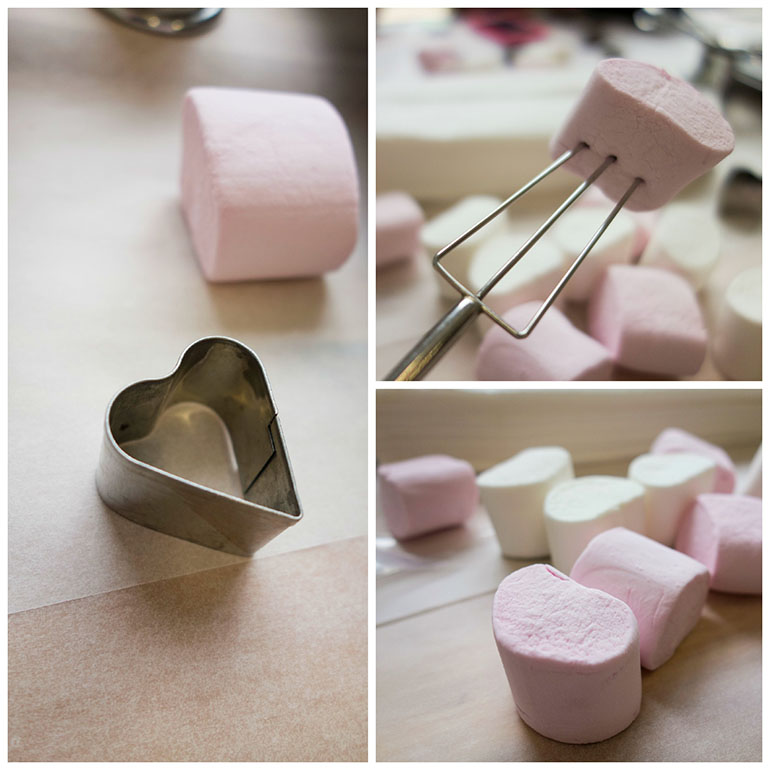 Hannah Saxton, the CEO of MyChocolate kicked off our chocolate odyssey. She explained how, armed only with her student loan and a passion for chocolate, she had left university early to set up MyChocolate.

From humble beginnings hosting chocolate making events from her small flat, the risk paid off and Hannah has grown the business into a successful company which now has kitchens in Central London for chocolate making classes and hosts events and classes at hotels in Brighton and Manchester too. 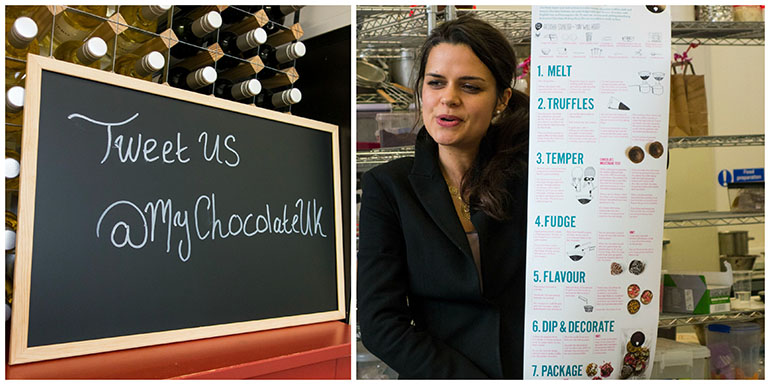 Davis was our friendly Canadian chocolatier for the day. He taught us how to tell the difference between higher and lower quality chocolate – higher quality melts in your mouth more easilly as it’s made with cocoa butter rather than hydrogenated vegetable oils.

We tested our new found skills with some blind tastings. I was terribly bad at identifying the flavours of the chocolates on offer but excelled at the eating part! 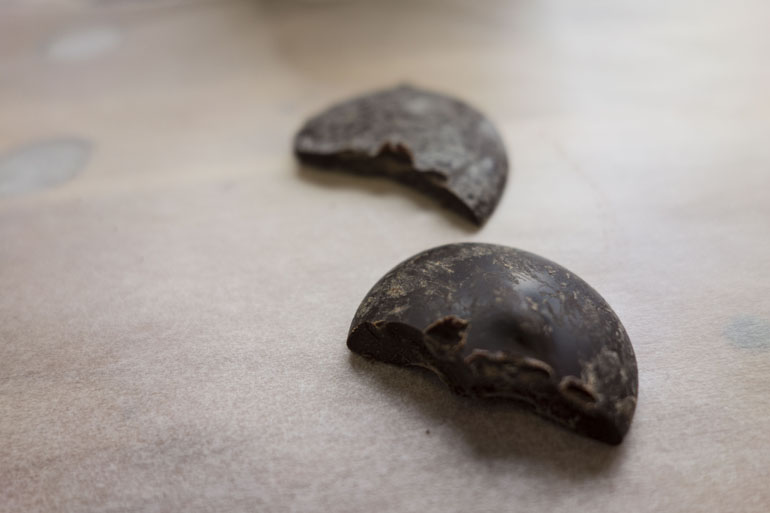 Next Davis showed us how to make truffles.

First you mix up a ganache for the centre using 2 parts melted chocolate to 1 part cream. The mixture is poured into a piping bag and massaged to get it to the right consistency, before being piped out into little droplets.

He showed us how you dip these into chocolate properly to get an even coating and then decorated his to perfection. 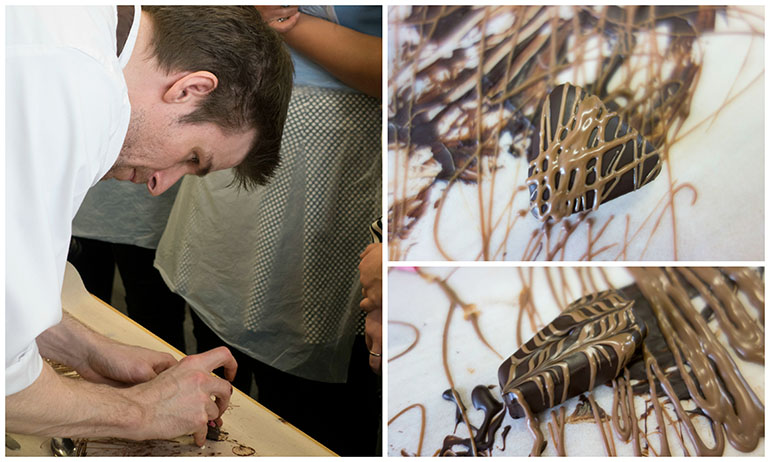 We split into teams and set to work. 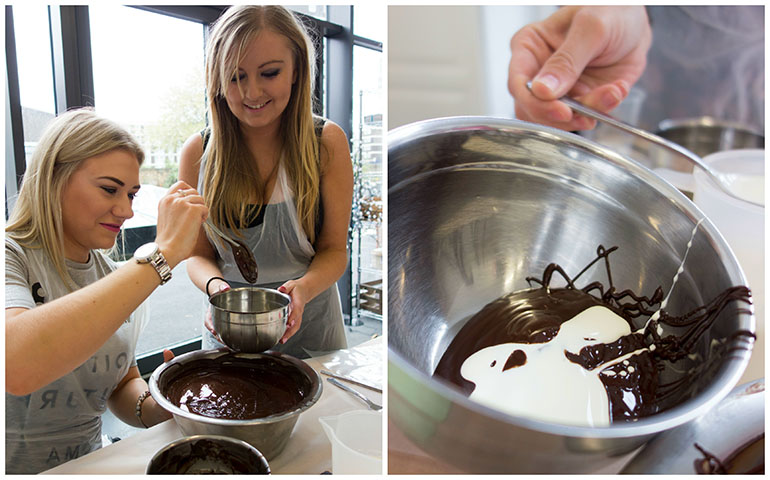 It turns out that Davis had made it look easy as our initial efforts to
pipe ganache were not pretty! He assured us that they would look much
better once decorated so we carried on making a mess and getting covered
in chocolate. What can I say? Playing with chocolate is hardly a chore! 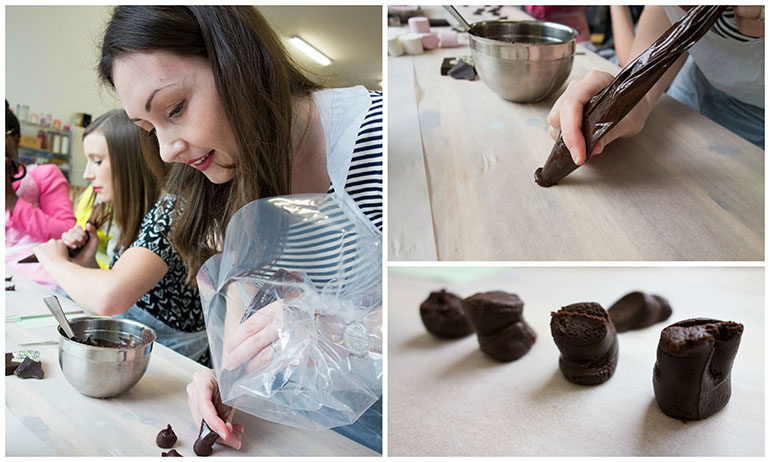 Once we had some decent sized truffle centres to work with we rolled them in cocoa powder then dipped them in melted chocolate and left them to harden. I also cut out some fudge and marshmallow shapes and dipped these too. 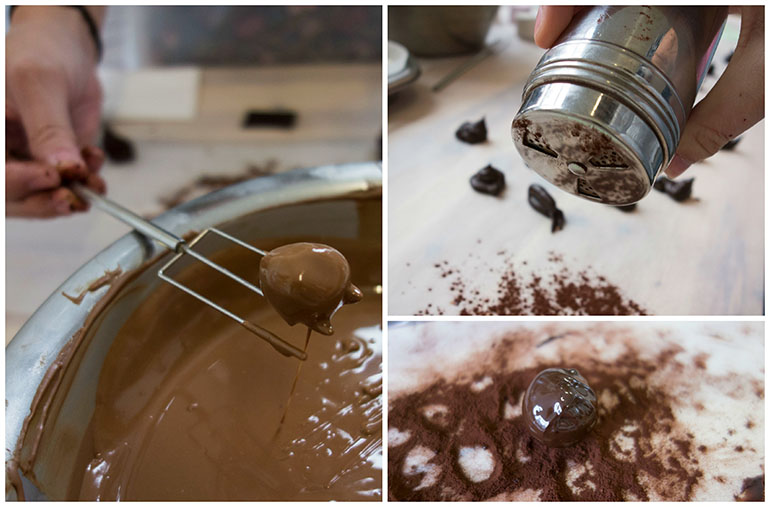 Then came the decorating. I was envisioning creating delicate swirls of two tone chocolate and adding artfully placed shards. In reality, I was so covered in chocolate at this point that I kept dripping it onto my masterpieces and accidentally leaving fingermarks on the still soft chocolate coating.

I still managed to make six decent looking ones though. My solution was: just add more sprinkles! 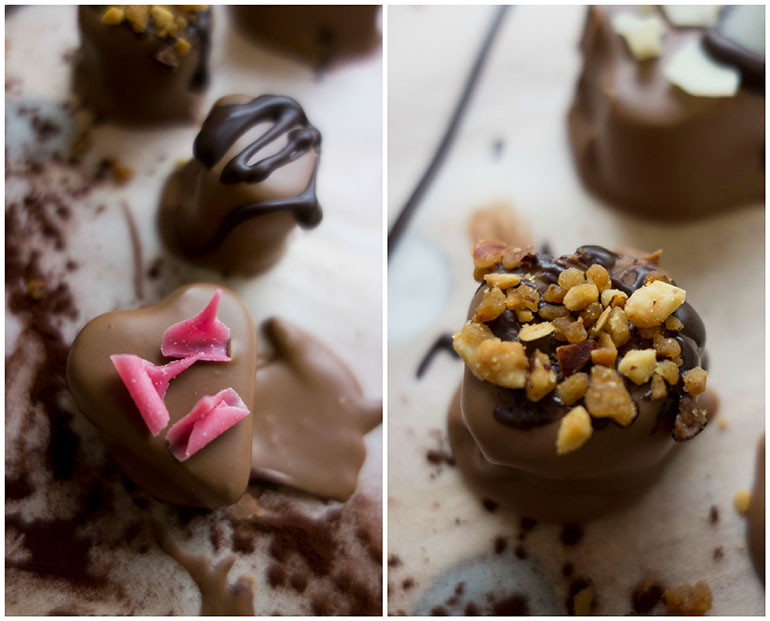 Pippa’s workbench resembled some kind of Jackson Pollock painting. I’d hang it on my wall (as long as I could pick off bits of chocolate each day – edible art daahling!). 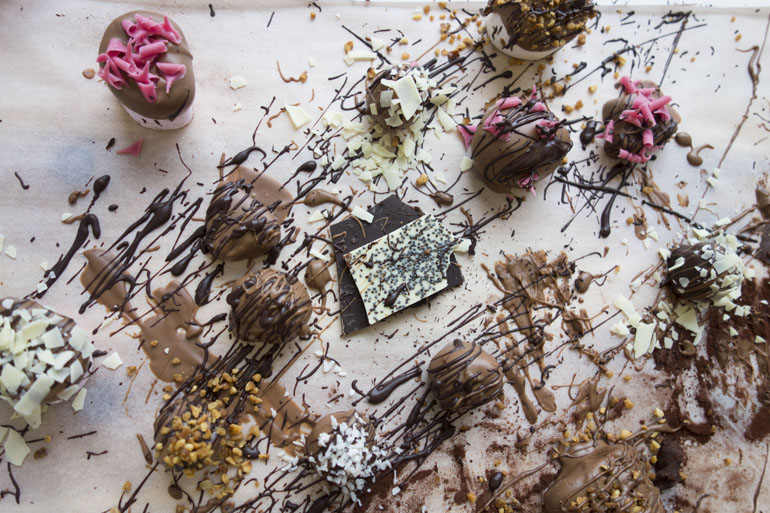 We were given gift boxes so that we could package them up to take home.

Some of them weren’t as pretty to look at… so I ate the evidence! But here are my best ones! 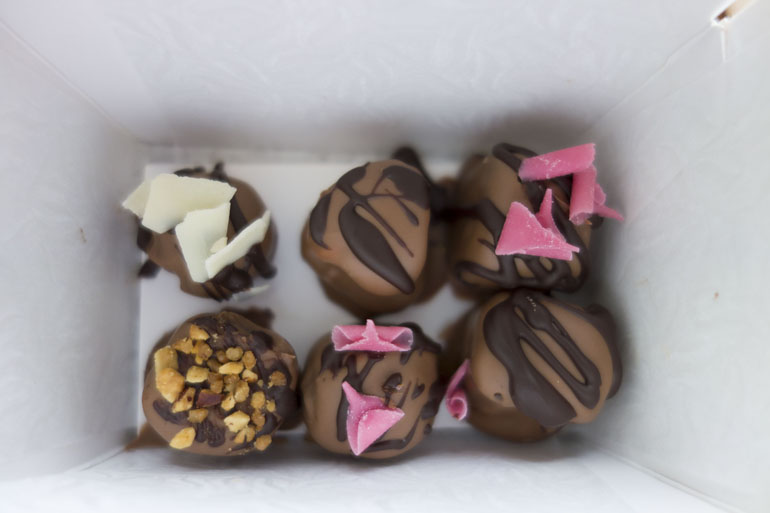 The rest went into cellophane bags tied with ribbon and were a hit in my office that week.

It’s safe to say that chocolate making is a lot of fun, regardless of how artistic you are. I really enjoyed our lesson and think that this would be great as a hen party activity or just as a fun day out with a group of friends. 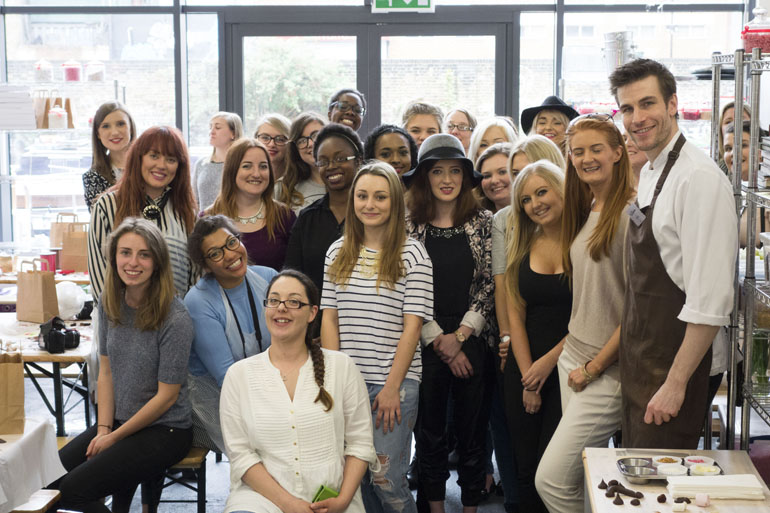 Classes usually cost around £45 each but MyChocolate kindly gave us a discounted rate so we paid £15.

If you can’t make it to one of the venues, their sister company thechocolatehedgehog has now launched which offers chocolate making kits for you to use at home. I am SO tempted to get one of these for my upcoming trip to Center Parcs as you can get a party sized version!

You can find out more about MyChocolate at their website: www.mychocolate.co.uk.

Thanks go to MyChocolate and @LDNMeetup for organising such a fun event!

Have you been to a chocolate making class or been tempted to try one?