I usually post on a Wednesday but the complete first series of Daredevil dropped on Netflix last Friday and we got a little bit addicted. Oops.

With 9 episodes already under our belt, I thought I’d come up for air and give you a lowdown on things I’ve been reading / watching recently! Here goes: 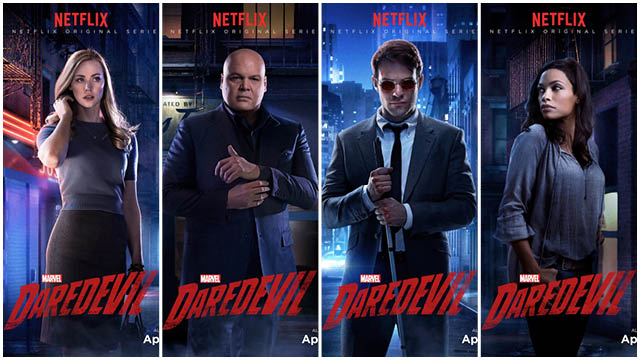 It’s no secret that my husband and I love our comic book capers – Marvel, DC, we watch them all.

For those of you who don’t know, Daredevil is the blind lawyer Matt Murdoch by day, but at night he lives in the shadows as a masked vigilante. With his other senses heightened (don’t worry – this is all explained in the early episodes!) he is an expert in martial arts and parkour.

This is by far the darkest, grittiest Marvel TV show I’ve seen yet. I found the first couple of episodes a bit on the boring side, too stylised for my liking with long speeches and protracted silences. Then, near the end of episode two came one of the best fight scenes I have ever seen on TV (possibly even in a movie). After that it had my full attention! I decided that I actually really like the mood of this one, it’s cinematic and builds so that when you do get to the action, it’s with purpose. The payoff is huge.

If you like your heroes violent, mean and moody, this one’s for you. It’s available on Netflix now. 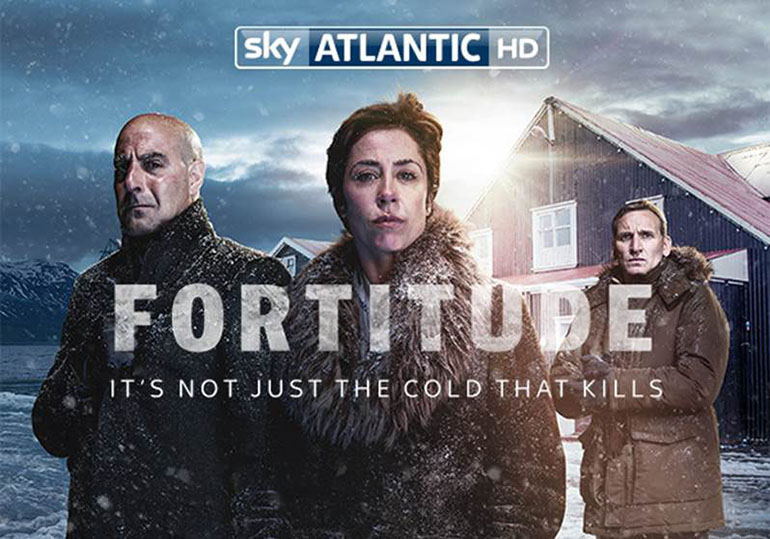 This has just finished on Sky Atlantic but if you are able to catch up On Demand I thoroughly recommend watching it. Set somewhere in the Arctic, Fortitude is an isolated town where everyone knows everything about everyone. In the first episode a gruesomely violent crime sends shock waves through the community and suddenly the town is rife with doubt, suspicion and mistrust.

Each episode is superbly cinematic due to the stunning backdrop of the polar landscape and they have a stellar cast including Christopher Ecclestone, Stanley Tucci and Michael Gambon. It’s definitely not an easy ride, the episodes are slow paced but build and build into some truly unsettling scenes. It’s hard to describe the genre. I’d go with part murder mystery, part thriller and it verges on being horror near the end.

Well worth hiding behind your cushion for, although I do warn you that you’ll be left with as many questions as answers at the end of the season. Luckilly it’s been confirmed that it will return for a second season!

Category: Crime Thriller
Read this if you like: The Millenium Trilogy (Girl With The Dragon Tattoo) by Steig Larrson

Set in Denmark, the first book begins with Inspector Carl Mørck sidelined into a dead end job investigating cold cases that no one cares about. He is soon joined by an eager sidekick Assad, whose background is a mystery that is slowly being revealed as the series continues. Together they become an unlikely duo who uncover some of Denmark’s nastiest secrets.Carl is the epitome of a grumpy old sod. He’s going through a very rough patch when the series begins and doesn’t have any enthusiasm for the case. As a result I found it hard to get into the book at first, but perserve and within a few chapters you will be gripped by the tale. A few more chapters, and you begin to warm to Carl and his loveably miserable demeanor. His interactions with Assad provide some much needed light relief to the sinister, unsettling nature of the main stories, which are all told through the current day investigations, as well as flashbacks told through the eyes of key characters.I have just finished book four and rushed straight on to the latest book in the series, because I couldn’t wait to find out what happened next!

The Girl On The Train by Paula Hawkins
Category: Mystery / Thriller
Read this if you like: Gone Girl, Gillian Flynn
Rachel loves to watch the same couple each day as she rides past their house on the train. She daydreams about their relationship, what they’re called and where they work. They are living her fantasy life. Then one day she sees something that changes everything.
A divorced alcoholic, she awakens one morning with blood on her hands and only drunken fragments of the night before. We follow her as she tries to make sense of the confusion.
Did a crime take place? Who was to blame? Is Rachel just an innocent bystander, or is something darker buried deep inside her memories?
This is a dark and unsettling read and not even one of the characters is particularly likeable. However, once you get past this, it’s a page turner and I was very satisfied with the story that played out.
The Villa by Rosanna Ley
Category: Chick-Lit Romance / Drama
Read this if you like: Switching off whilst sat on the beach with a cocktail This was on offer on Audible so I listened to it for some light relief.
In rather a far fetched plot, Tess inherits a Villa on the island of Sicily from a total stranger who turns out to be linked to her mother. 3 stories interlink. Jess tells of her journey to Sicily to uncover the secrets of her mother Flavia’s past. Flavia’s story takes us back to WWII revealing family feuds and forbidden love. Ginny, daughter of Tess, is going through a turbulent time in her life dealing with the transition to adulthood.
If it were up to me, the whole ‘Ginny’ story would have been cut out of it as I found it entirely pointless and more than a little bit irritating. What was worst for me was that instead of swearing like a real teen would, the author felt the need to use alternative curses, such as ‘Lolloping Lemurs!’ and ‘Meandering Meerkats’. I kid you not! No teenager that I know would talk like that in a million years and as the tale went on it drove me up the wall!
If you can get past that nonsense, it’s a good fun summer read that doesn’t need you to engage too many brain cells. Perfect for the beach.
How To Be A Woman by Caitlin Moran
Category: Autobiography
Read this if you like: Female comedy with a bit of bite
This one had me laughing and cringing in equal measure. Caitlin is brutally honest about her own experiences of being a woman and whilst most of this is laugh out loud funny, she also touches on issues such as abortion and feminism. I didn’t agree with everything that she had to say, but it was a very entertaining read nonetheless.
What have you been watching / reading lately?