Saturday night was date night and Mr F whisked me off Clarkes Peterborough. This may have been inspired by my current obsession with Masterchef… or perhaps my rather unsubtle hints after discovering their menu online and salivating for the last couple of weeks! 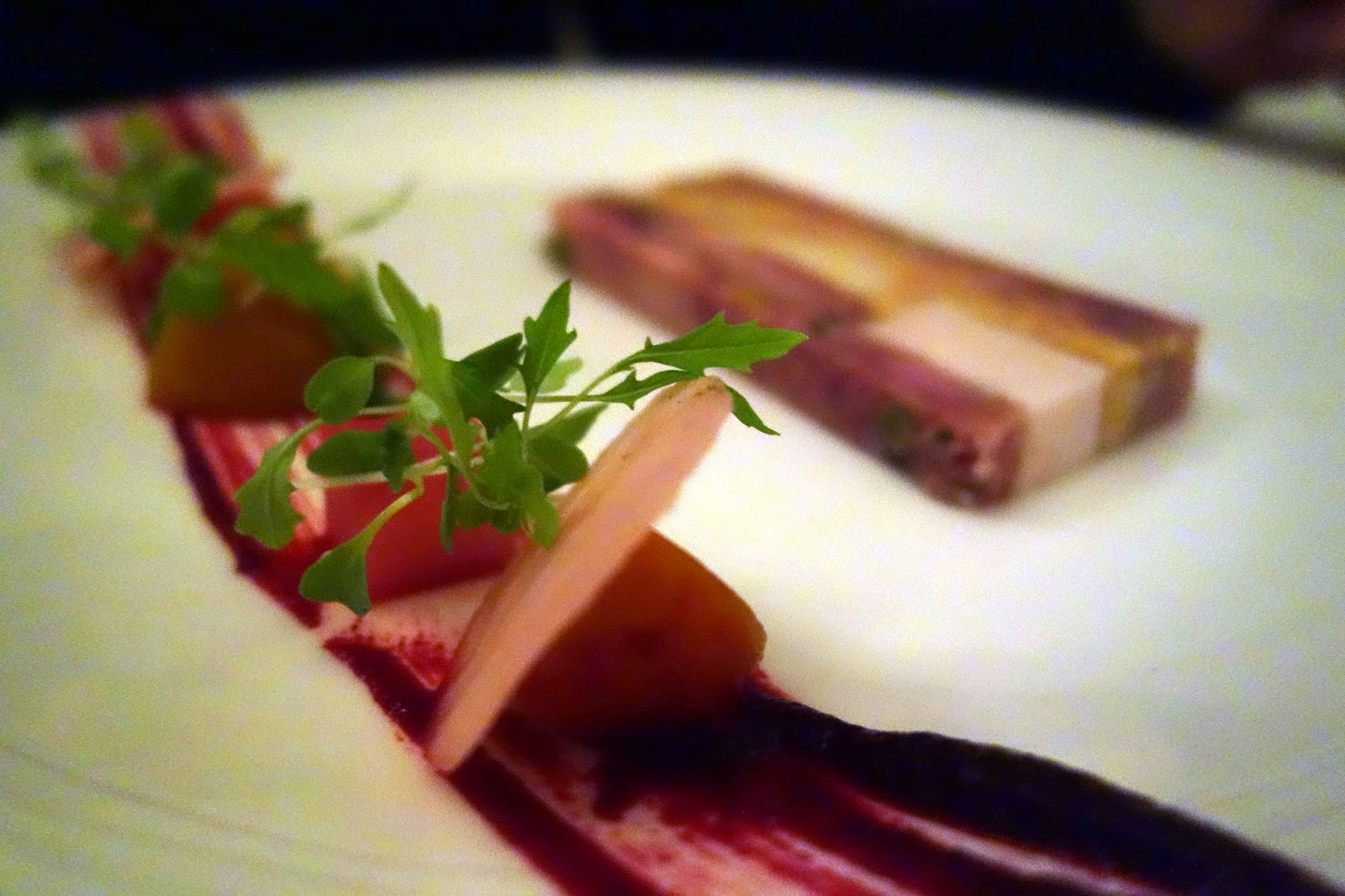 Clarkes is situated in the centre of Peterborough by the cathedral square, so we were able to take in the city’s Christmas lights as we strolled to the restaurant. They are really beautiful this year. 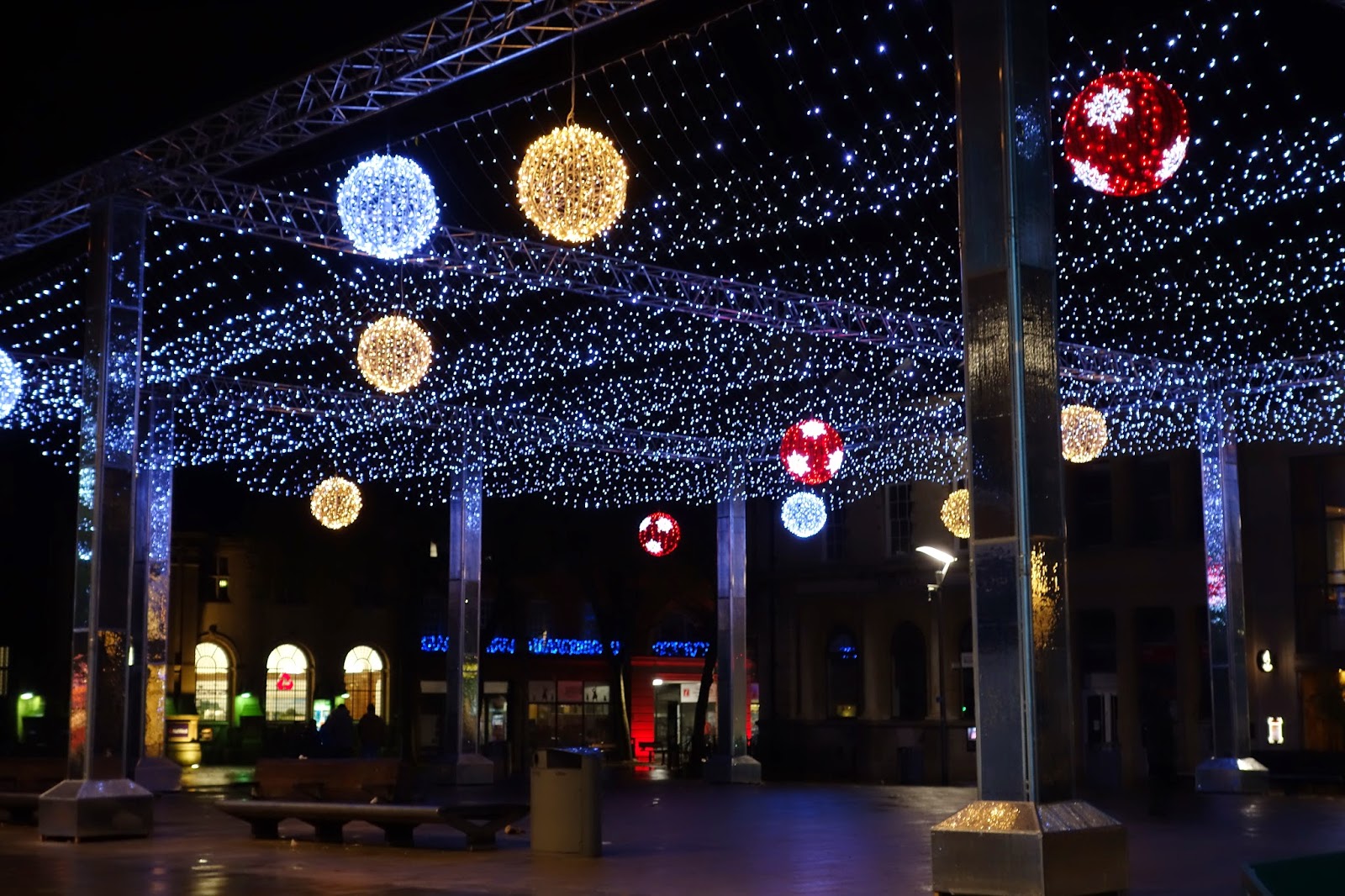 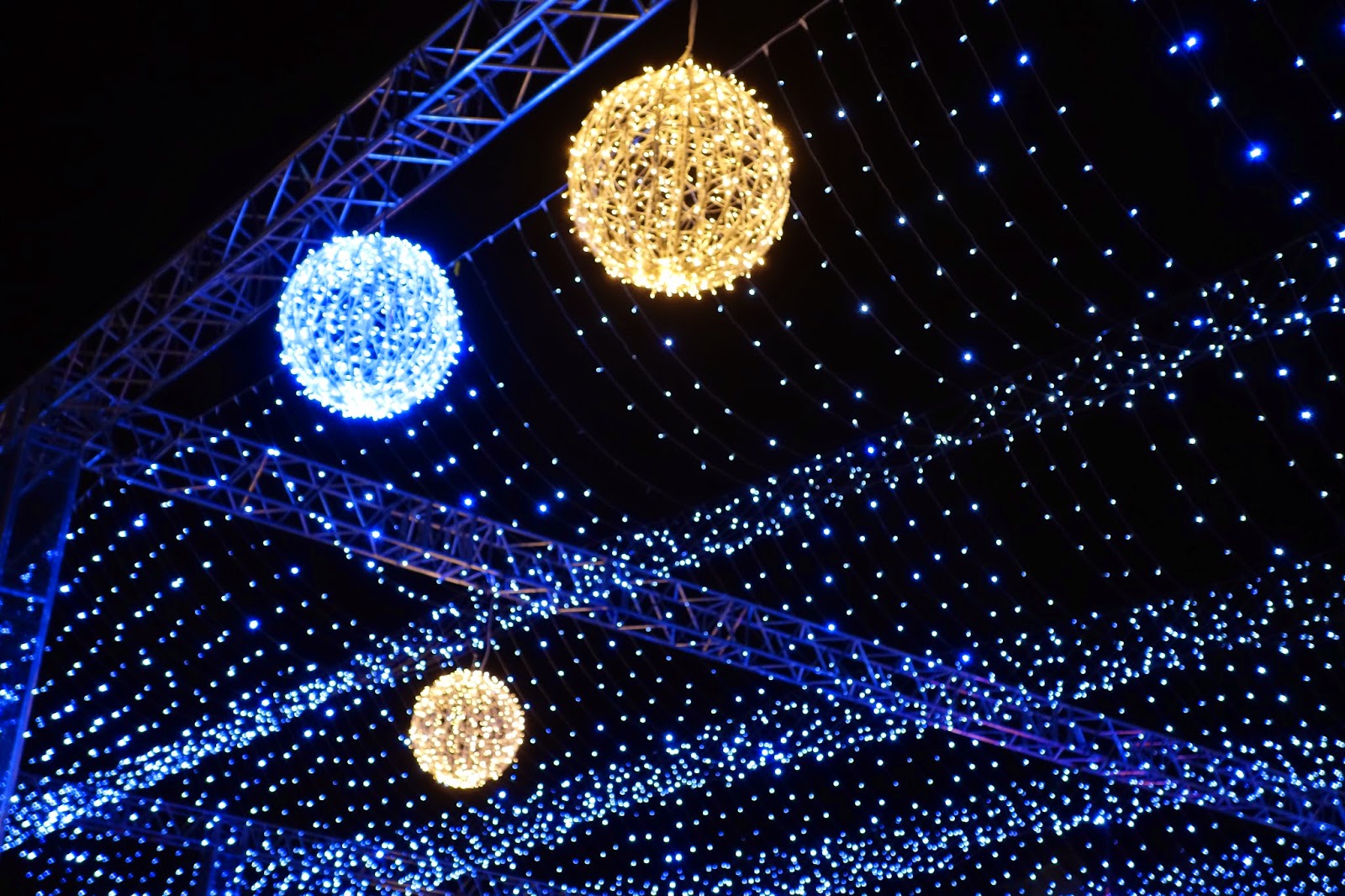 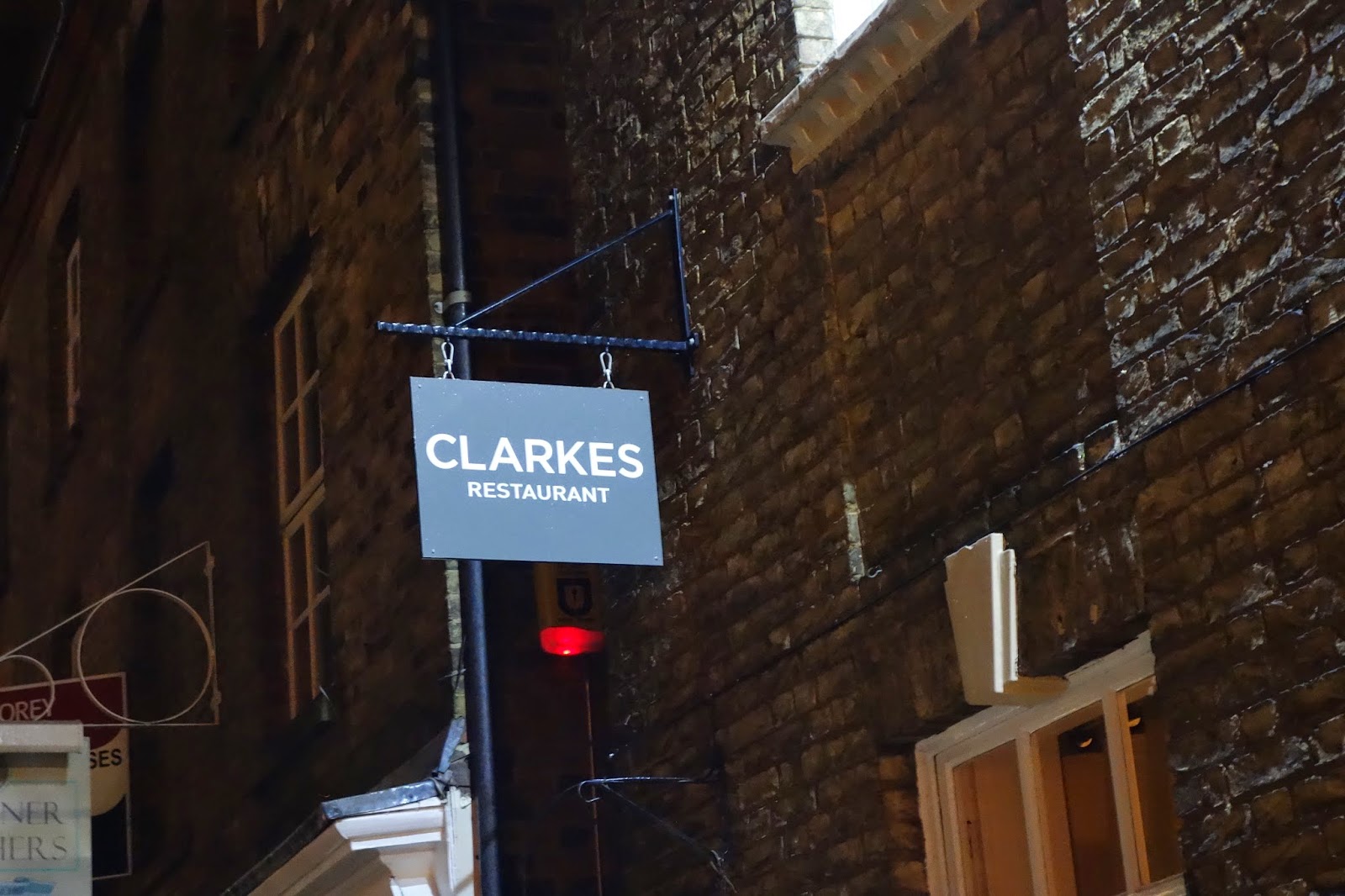 Inside we were warmly welcomed and shown to a cosy candlelit table. I couldn’t resist ordering a glass of bubbly.

(Excuse the photos that follow, but to be courteous to the other guests I didn’t want to use the flash!)

First was a pre appetiser – jerusalem artichoke and truffle soup, followed by a platter of fresh breads. Mr F eyed the soup with suspicion, followed by delight after tasting it, before gazing longingly at my bowl. Unfortunately (for him) I’d polished mine off too. It was light and creamy and the perfect size to leave us wanting just a little bit more – just as I imagine a ‘pre appetizer’ should. 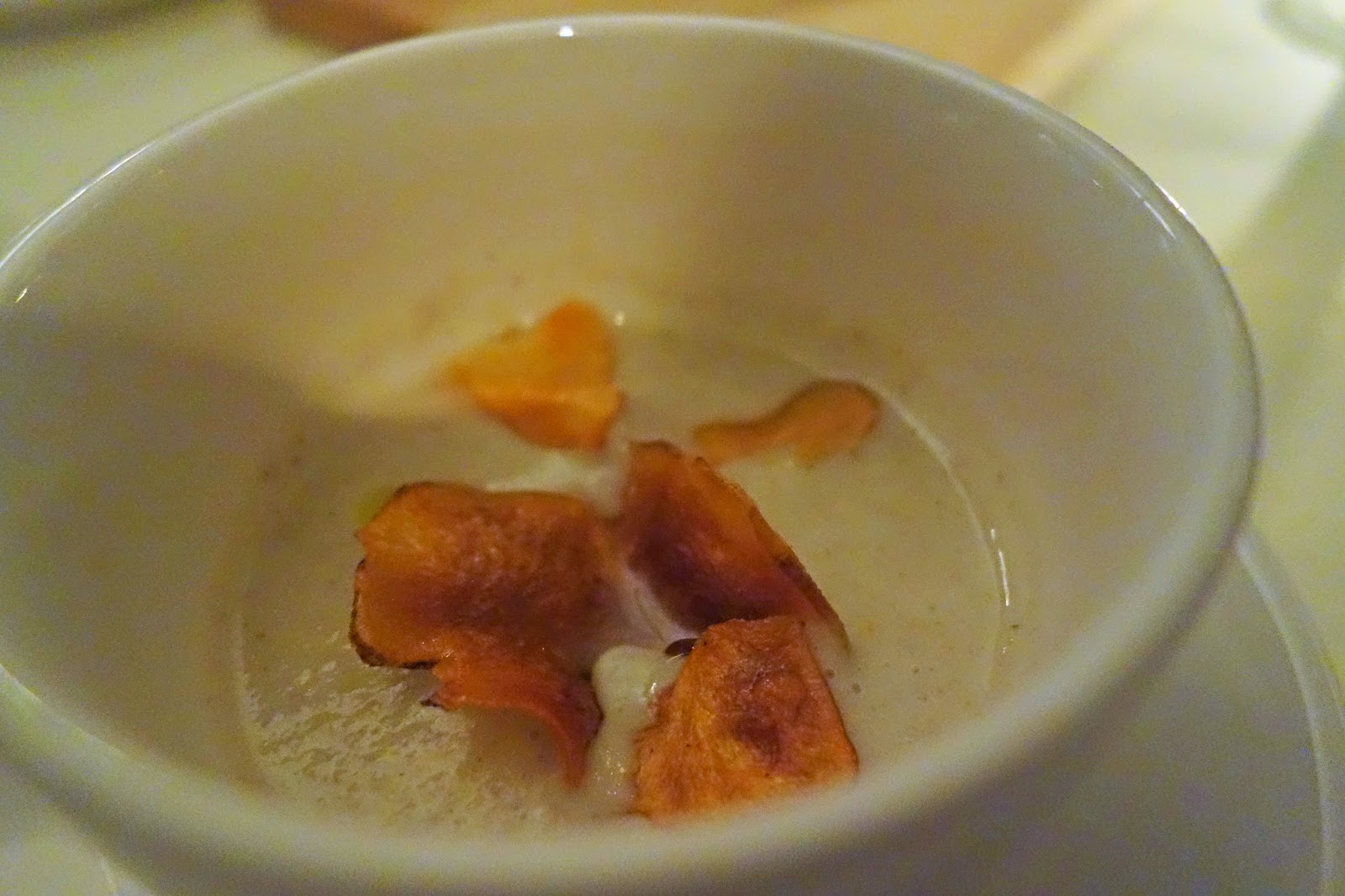 My starter was mackerel, apple, salt baked fennel seaweed and dill crust and horseradish. Just look at the presentation – isn’t it beautiful? 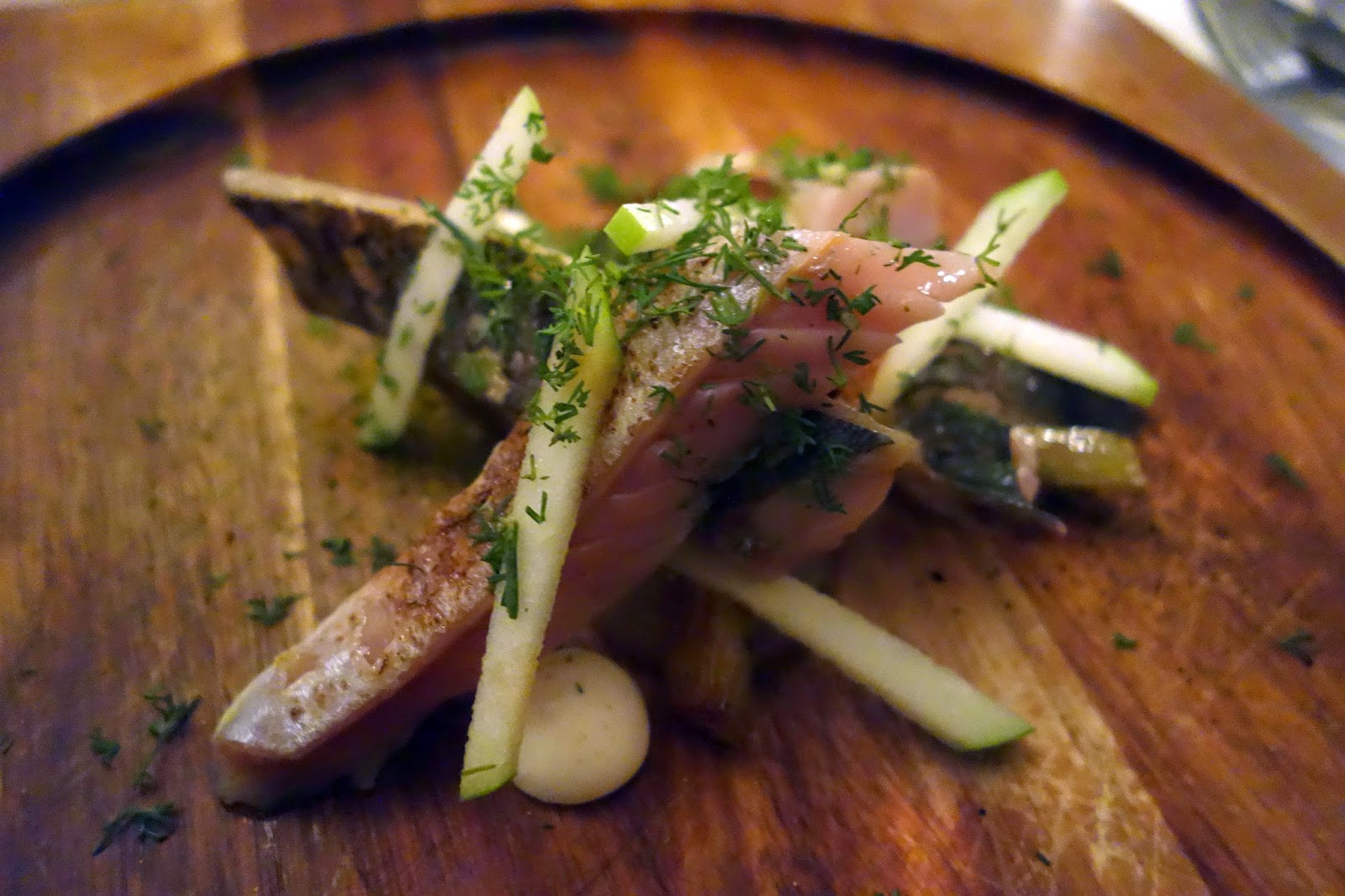 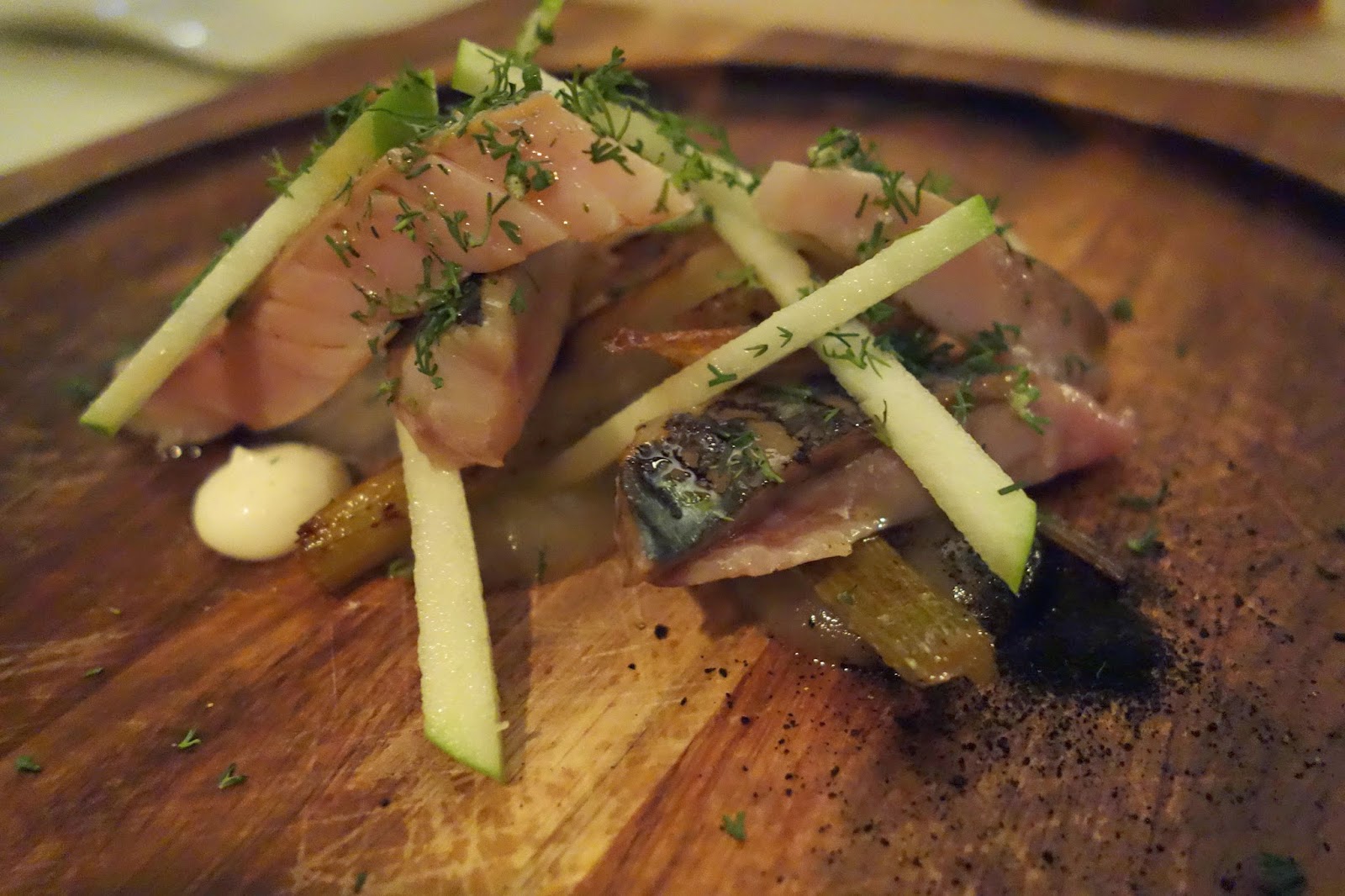 Having not eaten at a fine dining restaurant before, I was under the impression that all portion sizes would be minute and that the few artful droplets of sauce would leave me wanting. However the small portion of horseradish proved to be just right – any more would have killed the subtle flavours. The mackerel itself was melt in the mouth and worked really well with the fresh crunch of the apple. 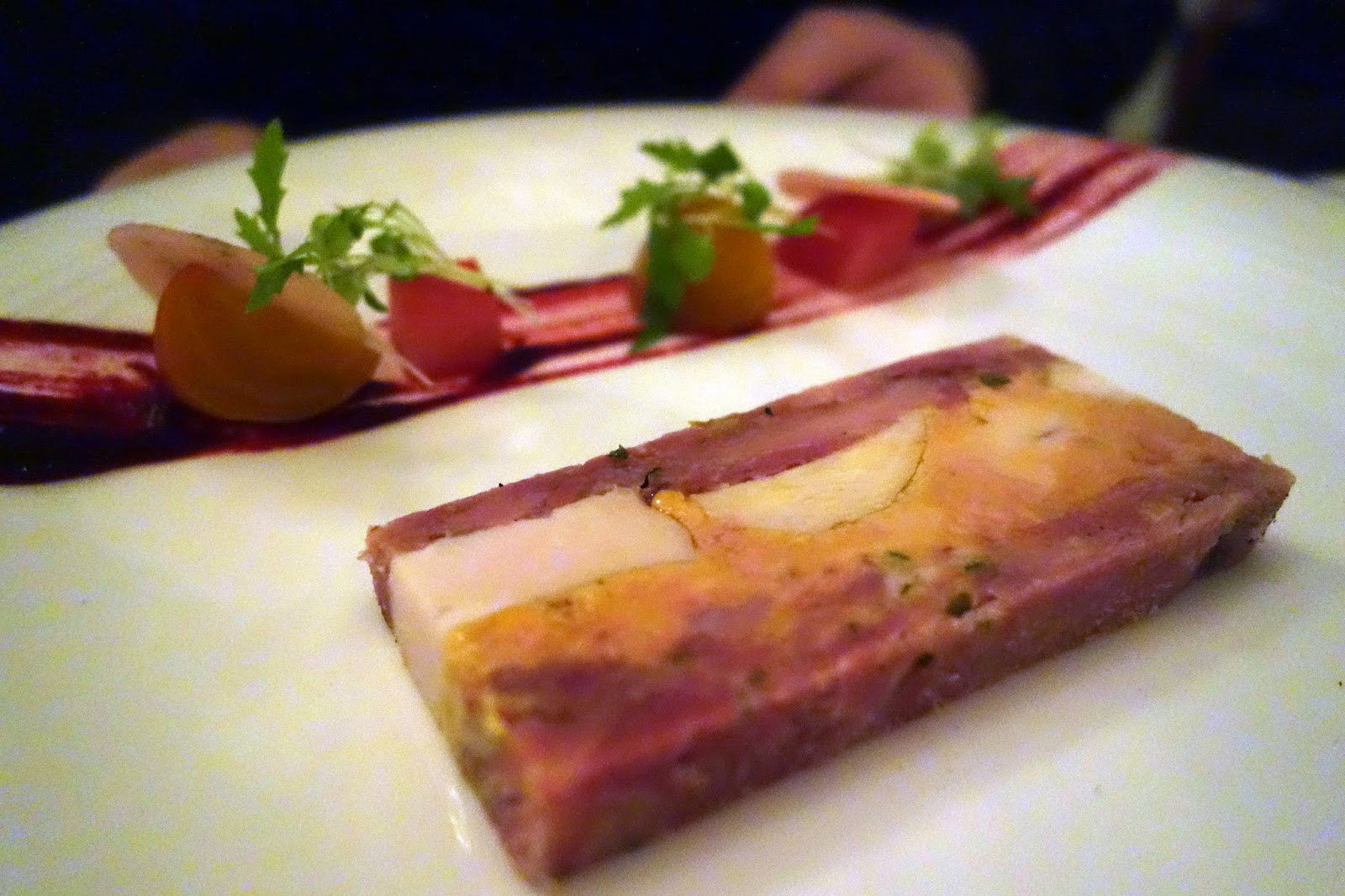 As a small side note on foie gras – Clarkes policy is use responsibly produced British
meat from local suppliers wherever possible. I was, however, surprised when my husband ordered it. He later rather sheepishly confessed that he did not know what foie gras was when he ordered it and would have chosen differently had he known.

For main, I chose Beef ‘Cheek to Tail’ with grain mustard mash, sprouts and shallot, which I just can’t fault. Each element was beautifully cooked and provided a showcase of the different cuts of meat, some of which I had not tried before. I was starting to feel full at this point but just couldn’t stop eating! 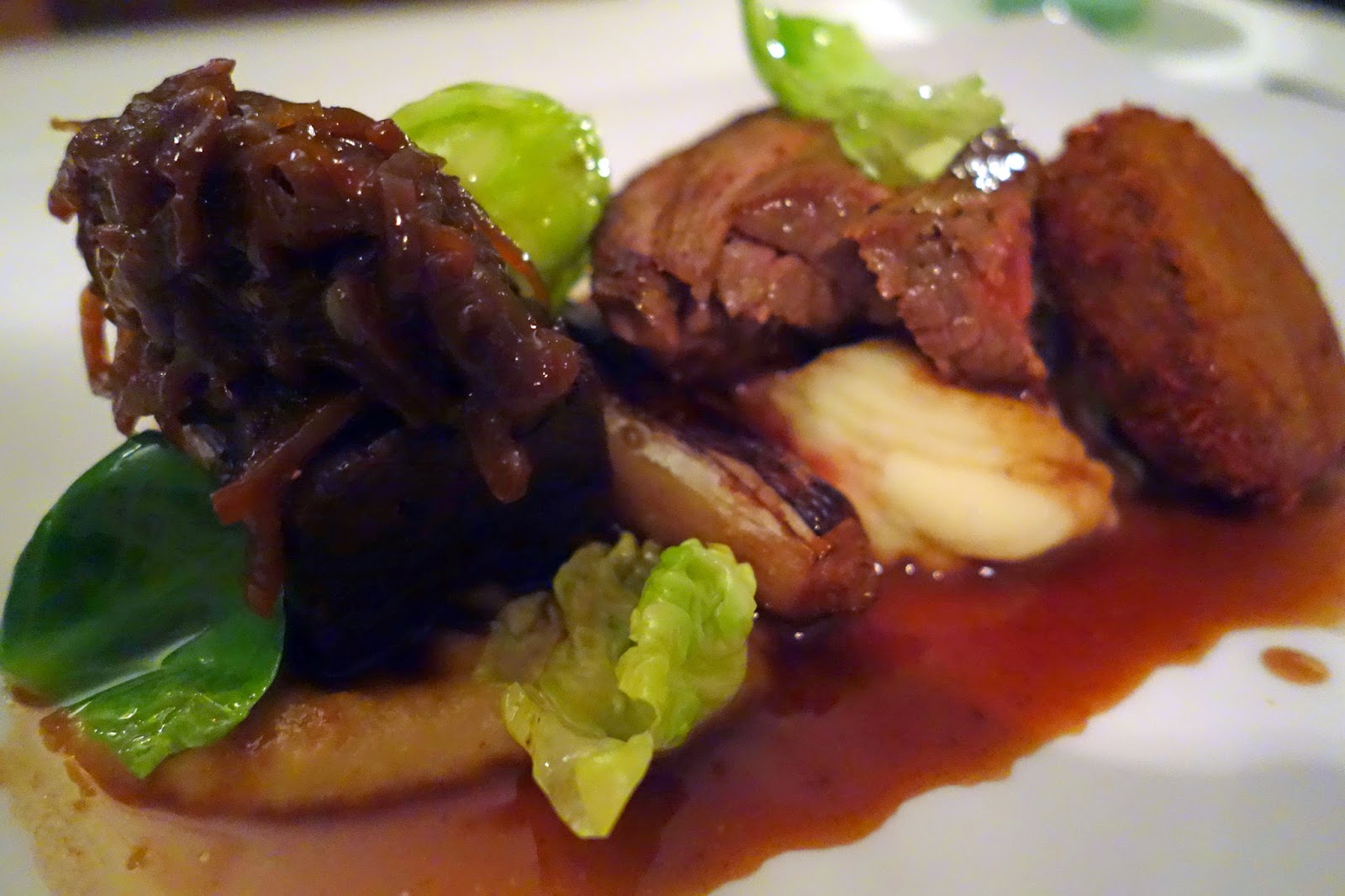 Mr F had Denham Estate venison wellington, coffee and cauliflower. I would have tried some if I wasn’t feeling so guilty at this point for devouring every last morsel of my main. 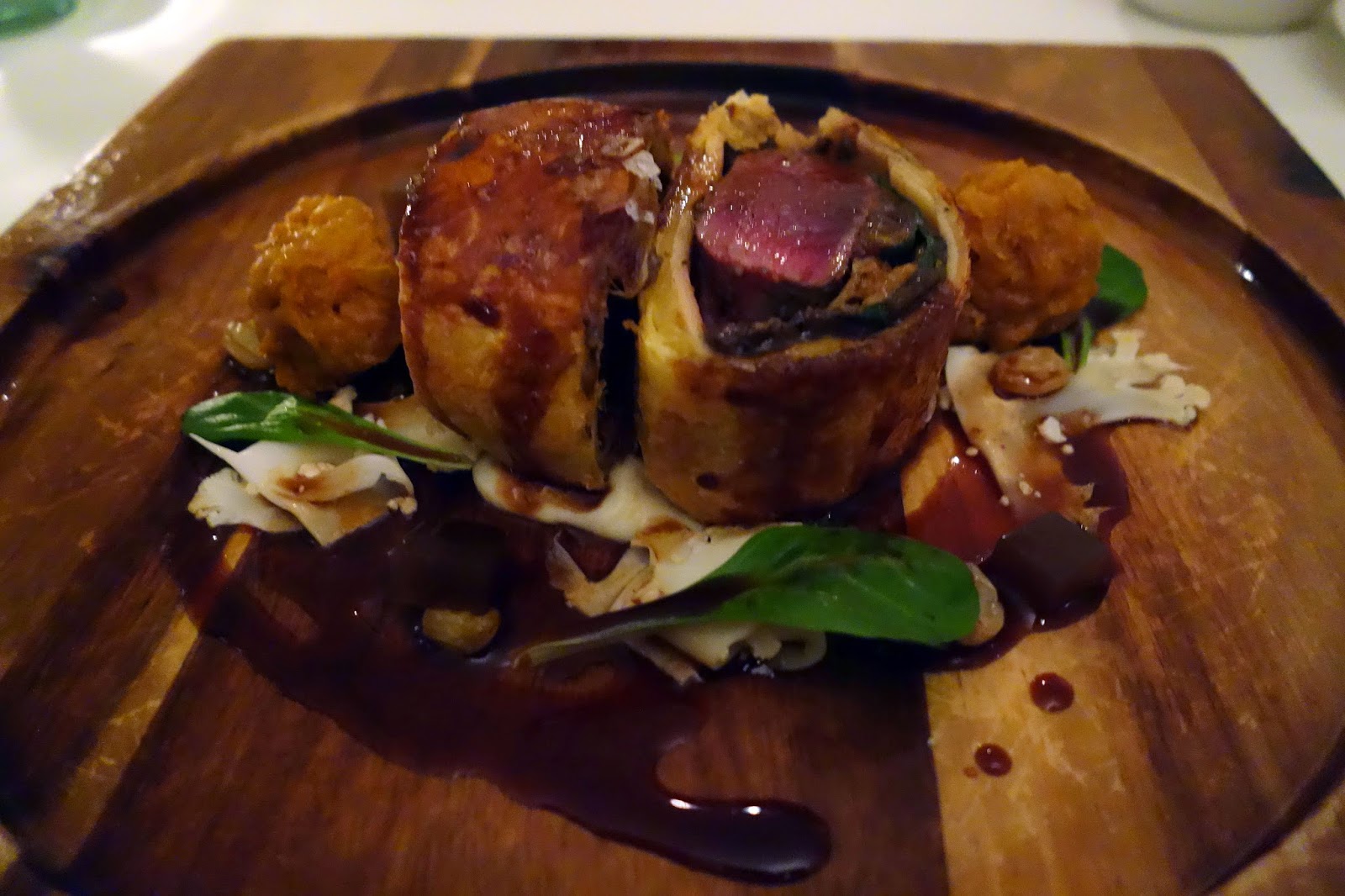 We ordered desserts, not so much because we were still hungry at this point, but because we were enjoying the whole experience and felt that we’d have missed out if we didn’t sample the sweets.

..of course we hadn’t expected a pre-dessert palate cleanser of cranberry and homemade yoghurt. It was sharp and refreshing, but I could only manage a few mouthfuls… I had to save a little bit of room for dessert after all! 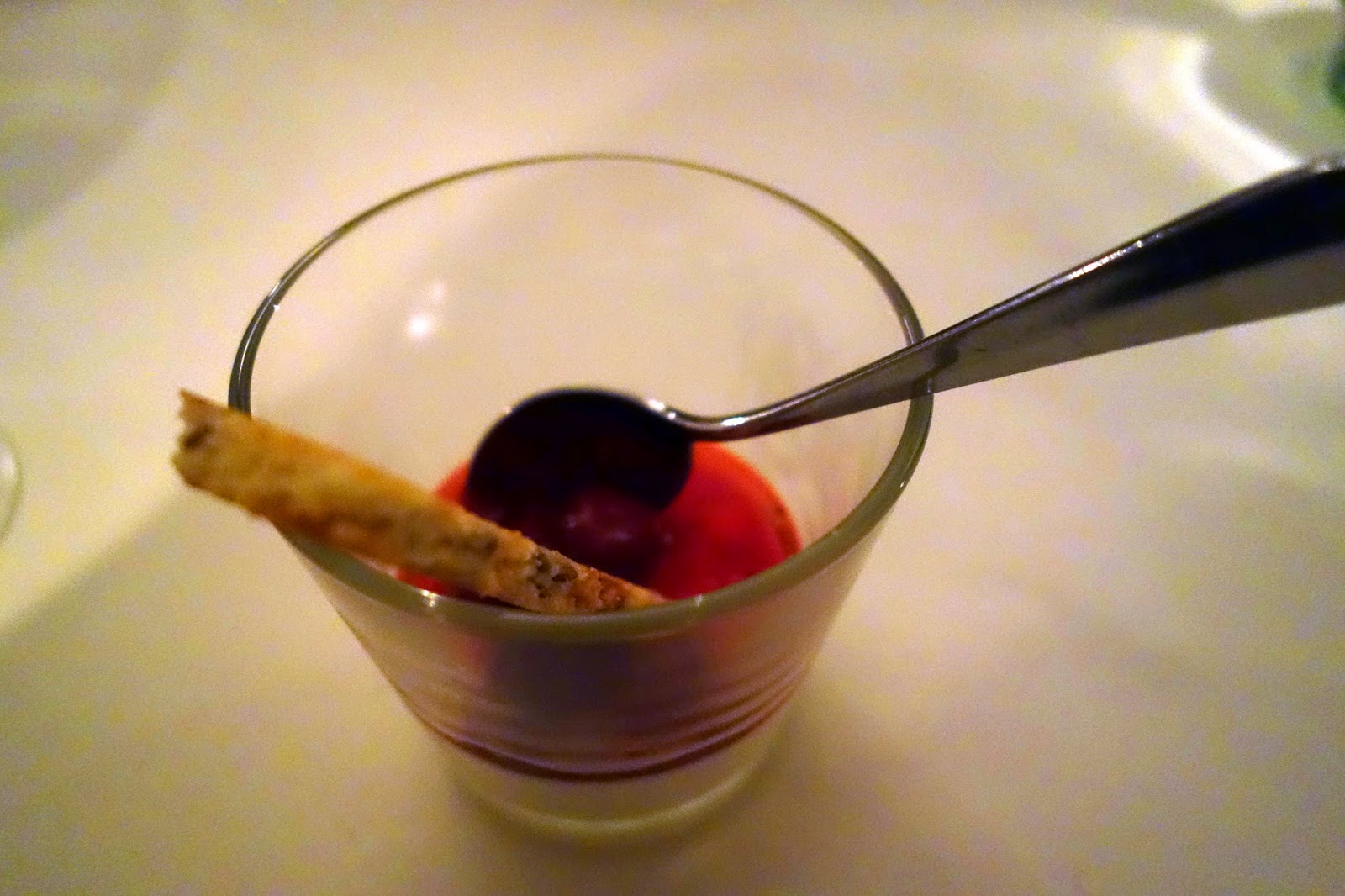 For dessert the Mr had baked pineapple, parkin cake and goats milk ice cream. I didn’t get a chance to take a picture – he dived straight in!

I picked the chocolate fondant – and after seeing it done so many times on Masterchef I just had to do the ‘ooze’ test! It did not disappoint – hot chocolatey goodness poured out as I broke it open. These pictures are seriously dark – much like the chocolate. This was pure decadence. 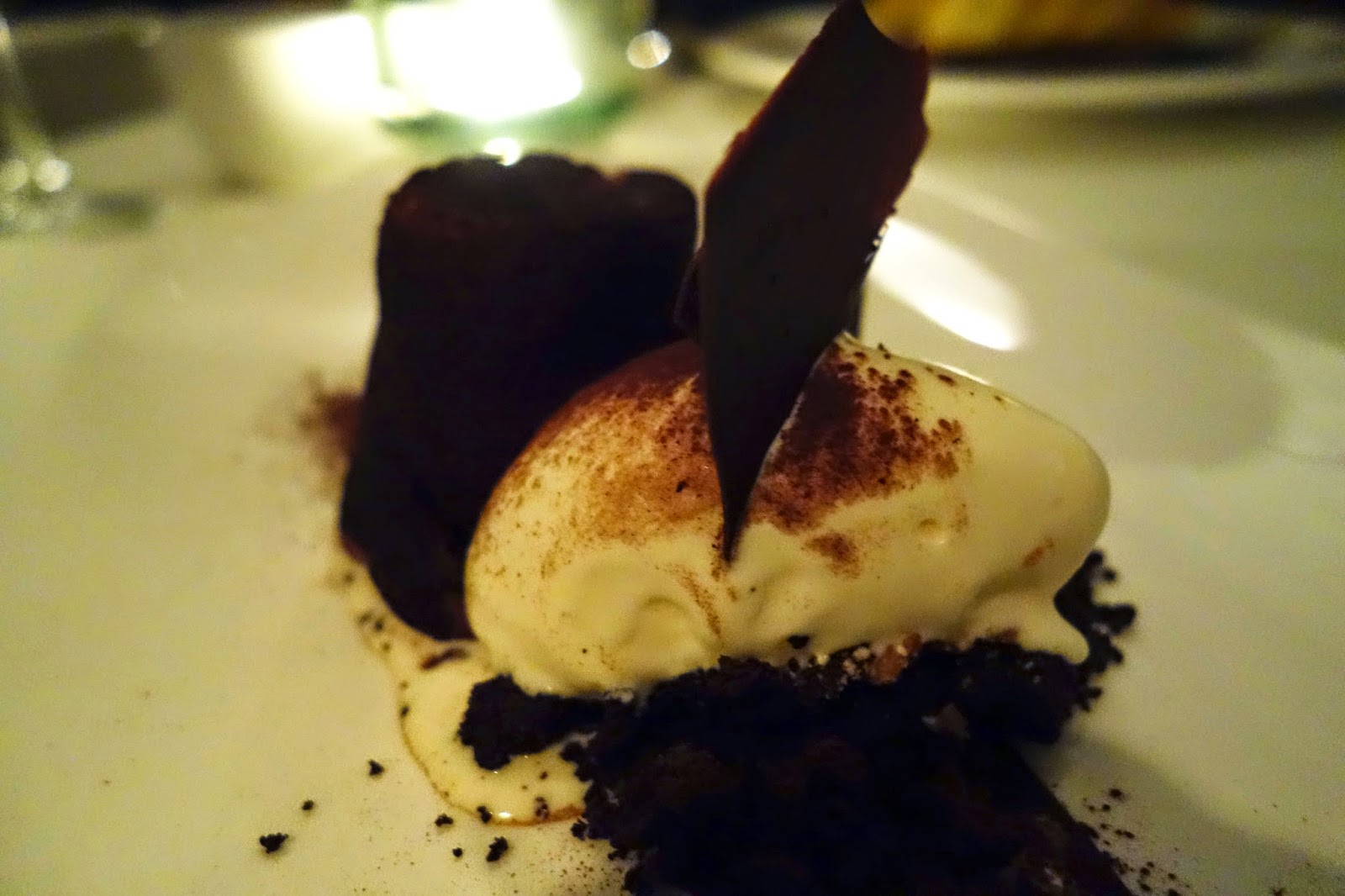 Overall I can thoroughly recommend Clarkes. With 3 courses for £40 it’s on the more expensive side, so would be perfect for a special anniversary… or like us a long overdue date night!

N.B. This review is based on my own experience and is my genuine opinion, I have no
personal or business relationship with this company and have not
been offered any incentive or payment.