I just got back from the Good Food Show Winter.

It was one of the best days out that I’ve enjoyed this year, complete with some downright surreal moments including an unplanned encounter with one of my food heroes!

I hopped on a train at stupid-o’clock and headed to Birmingham. My sister, who lives ‘oop north’ traveled to meet me.
As we live so far away from each other, we both get ridiculously excited and the day is filled with frenetic chatter as we attempt to download at least 6 months’ worth of news, whilst browsing, shopping and filling our faces with all of the free tasters on offer.

The exhibitors range from well known brands such as Kenwood, Magimix and Knorr, to independent artisan food and drink producers, who go out of their way to entice you to their stall with creative displays and free samples (it’s usually not a particularly hard sell with me!)

There were beautiful macaroons. 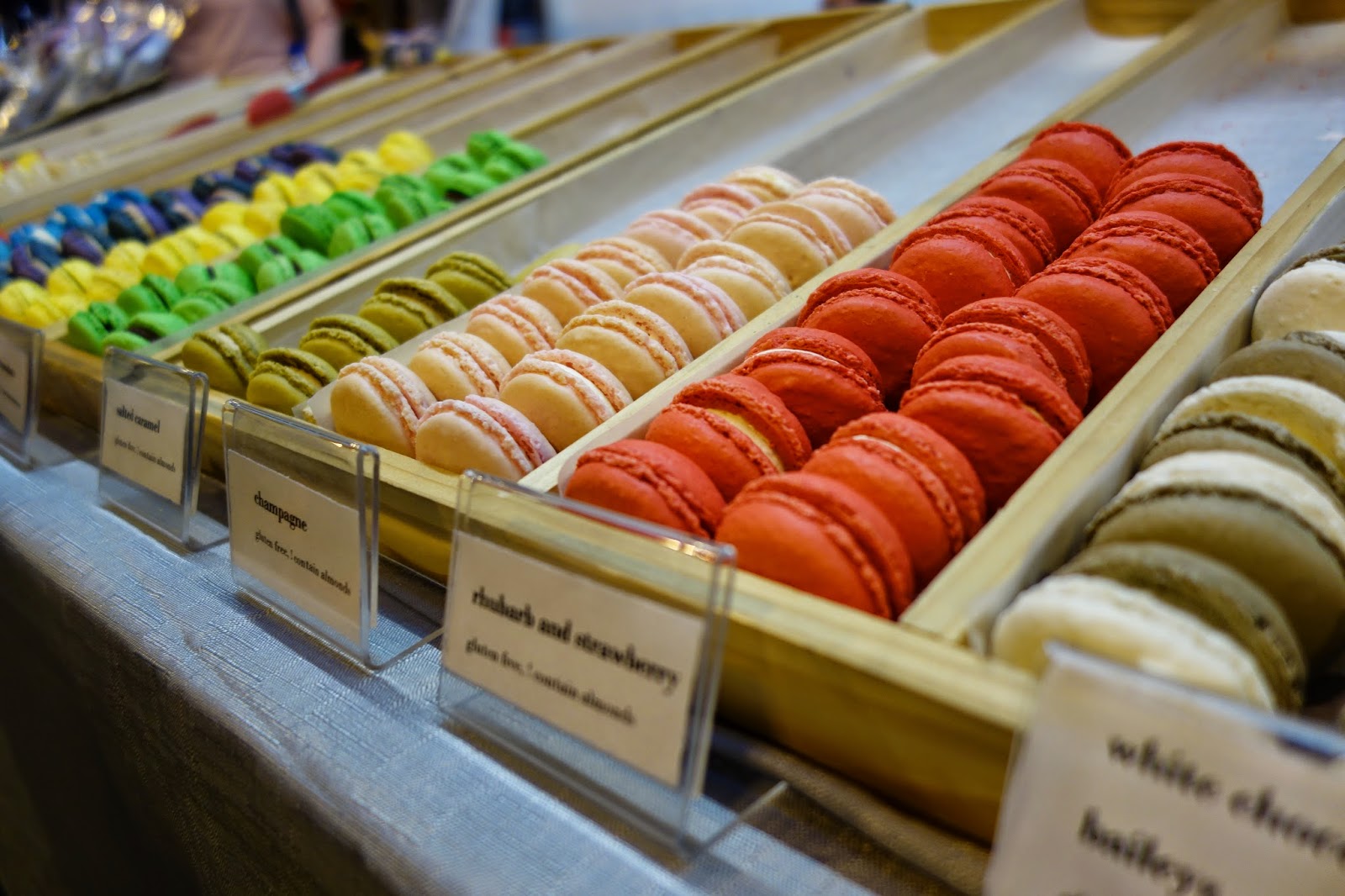 We were tempted by the wonderful displays of meringues and other sweet treats. 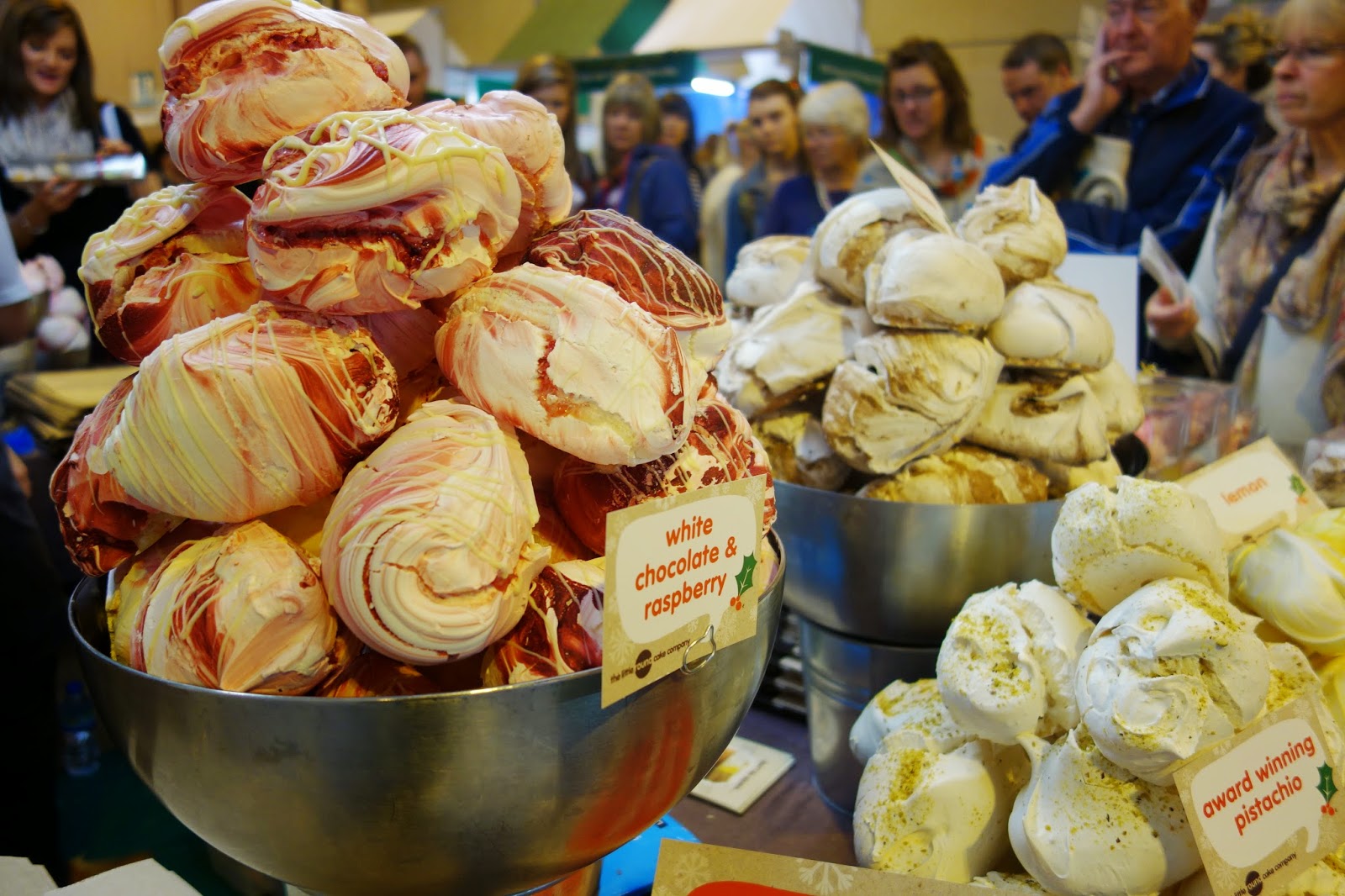 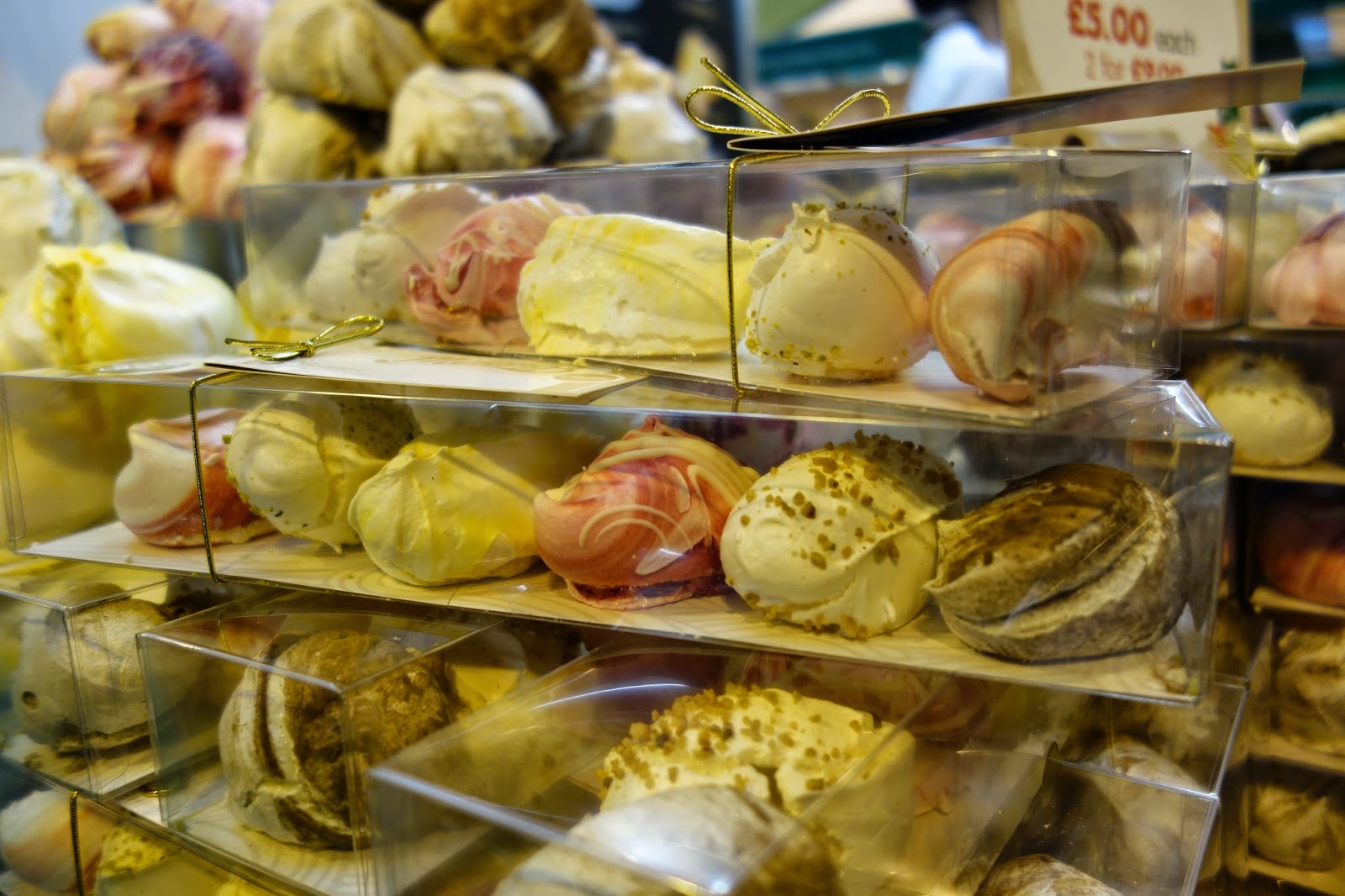 Then we spotted one of our favourite exhibitors – Fox’s Spices and made a beeline. 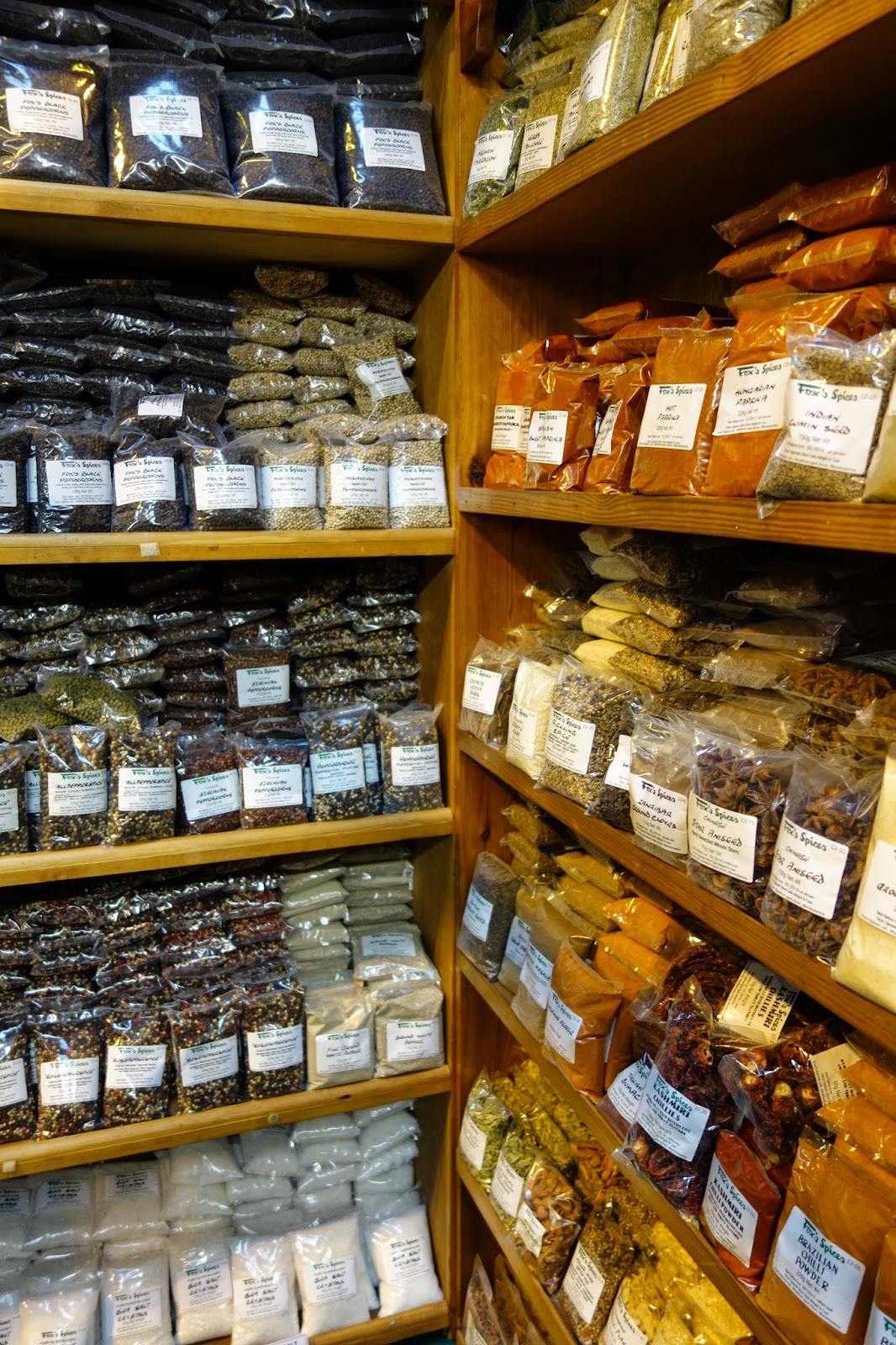 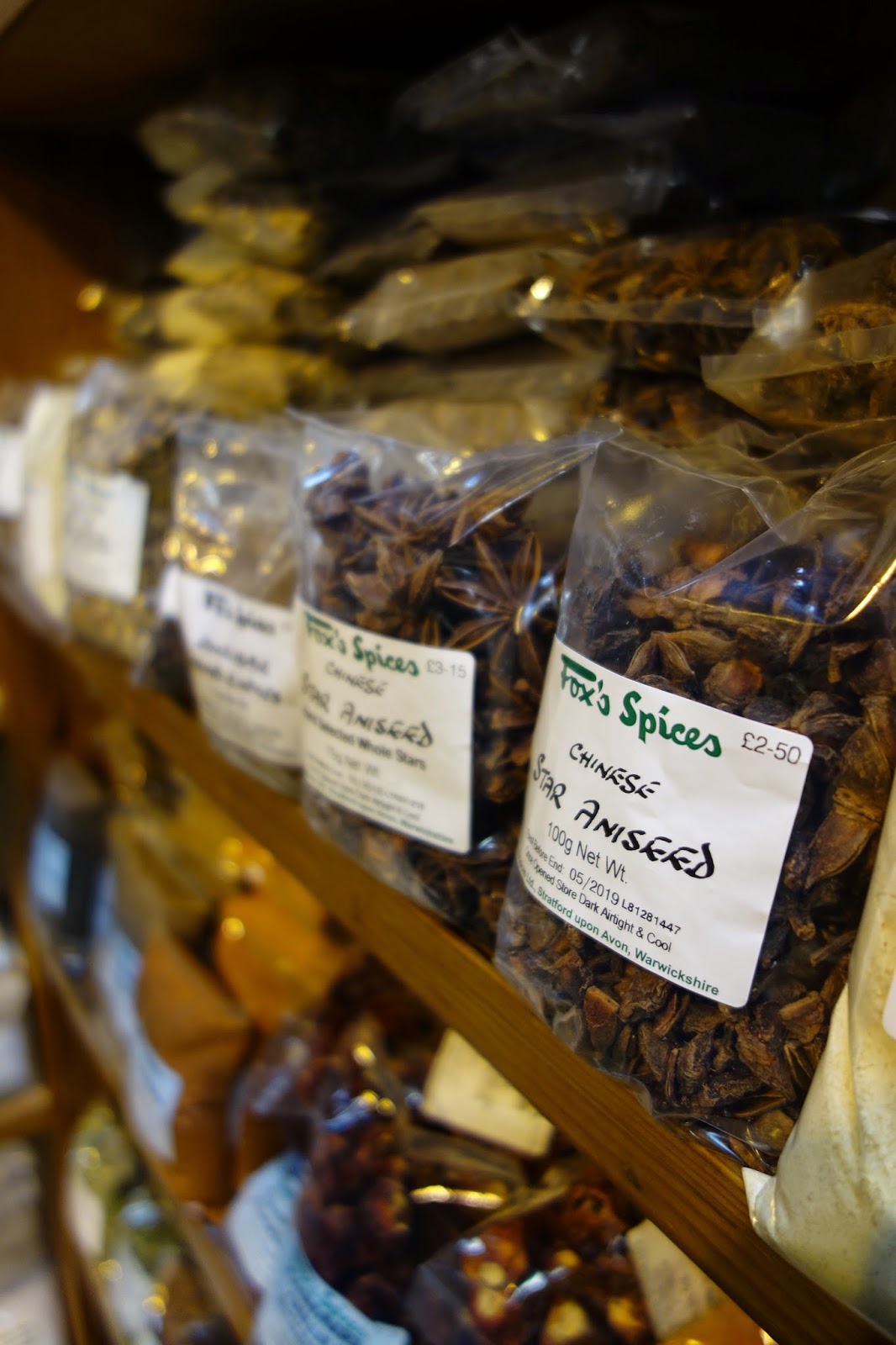 I could spend hours browsing this stall, the shelves contain a cornucopia of treasures.

I decided to take a few photos of the Saturday Kitchen Live Stage. There I was, looking through the lens, leaning backwards to get the shot that I wanted, when I felt a presence beside me. As I’m trying to focus the shot, a man leans into my camera lens, grinning broadly. To say I was caught off guard is an understatement. I lowered the camera, with a slightly awkward but polite smile on my face (who WAS this weirdo?) only to slowly realise that it’s PAUL HOLLYWOOD!!! Yes, that’s right, PAUL HOLLYWOOD TRIED TO PHOTOBOMB MY SHOT!!!

(For any non British readers – Paul is the judge on The Great British Bake-Off – a much watched baking competition in the UK).

As realisation dawned, he chortled and strode off towards the Supertheatre, leaving me standing in astonishment, still clutching my camera, trying to comprehend. Then I realised the awful truth – I hadn’t taken the picture – Noooooo!!!

(My husband later consoled me that it would probably have been a rather blurry unidentifiable picture of someone’s nose, but still…).

I ran off to find my sister who was browsing nearby and hurriedly explained what had happened. “That’s so funny – trust you Laura” she chuckled, “now should I get one bottle or two?” I’m not sure she grasped the magnitude of what just happened.

All of a fluster at this point and with our bellies grumbling, we sat down for a spot of afternoon tea, which is ironic because neither my sister or I like either tea or coffee. But we are British and we do like sandwiches, scones and cakes, so it had to be done! 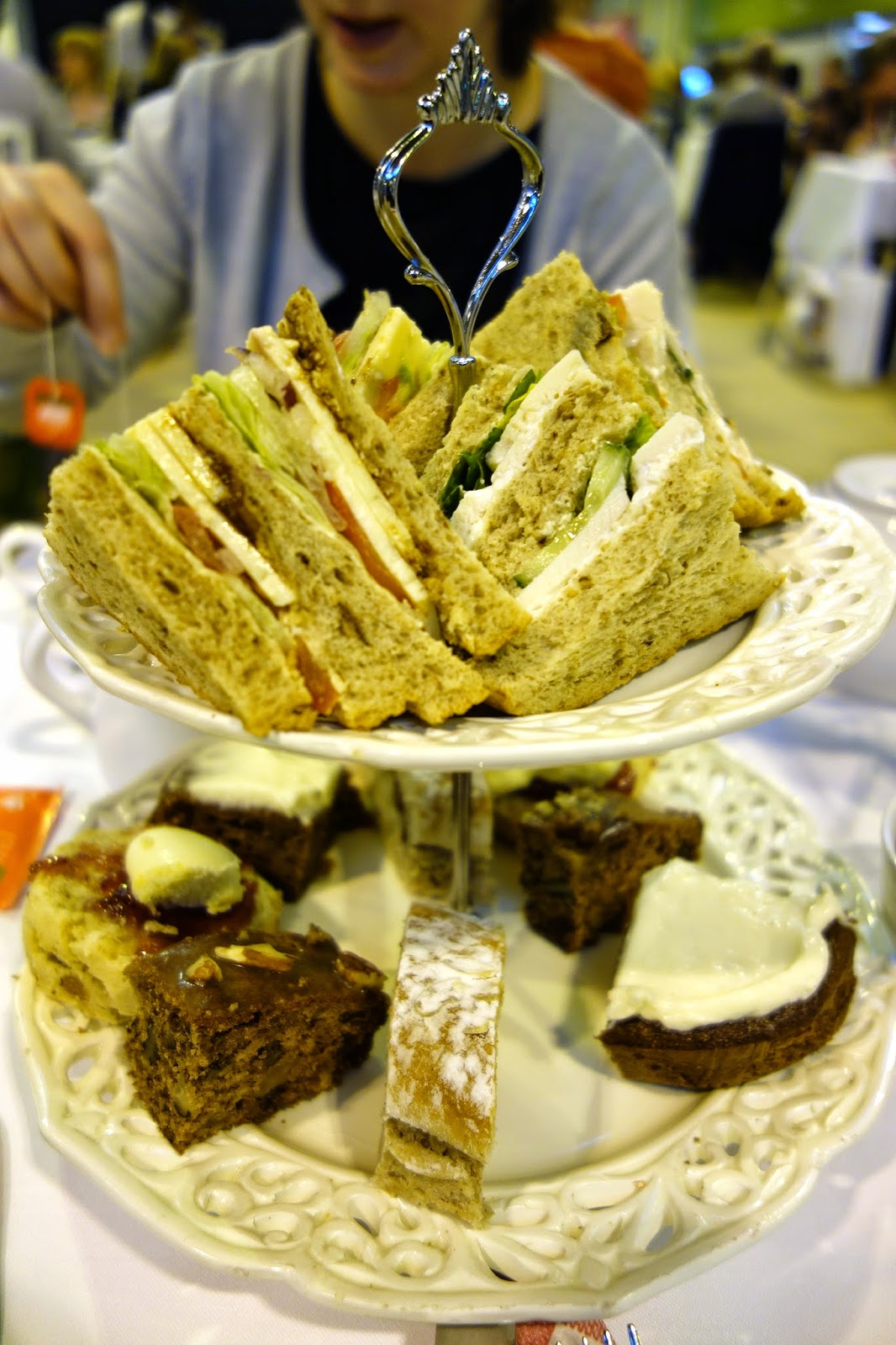 It was at this point that I noticed that my brand new slouchy jumper was moulting little bits of black fluff. I noticed this because the table we were set at had a crisp white table linen, which was covered in black fluff by the time we left (sorry guys – I hope you had a lint roller!)

We watched a demo on classic Japanese knife sharpening. 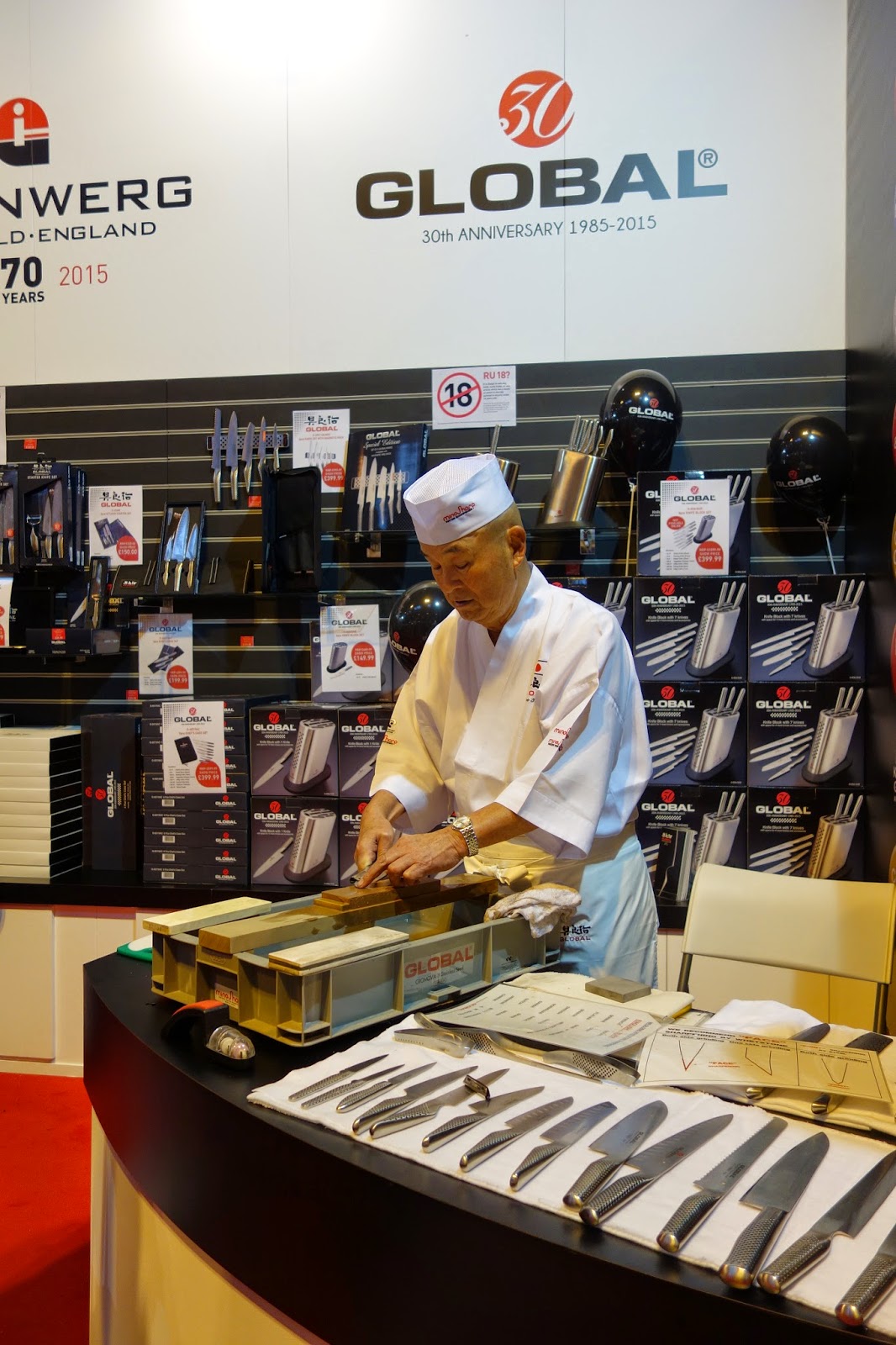 I tried out a few of the blades, got carried away finely slicing a carrot and almost removed a finger! Decided not to purchase said knife on this occasion, for the safety of myself and others.

We walked past a huge crowd gathered at the Knorr stand and went to see what the commotion was all about. As any regular readers will know, I adore Australian Masterchef. As such when I recognised that Marco Pierre White, regular on the show, was giving a live cooking demo and was a mere 5 metres away from me, I again got all in a fluster. Unfortunately being far too late to the party meant that I couldn’t really hear a lot, although I catch him advise the front row to use a spatula, not a wooden spoon, for stirring risotto. Great tip – YES CHEF!

As we walked back past the Saturday Kitchen Live Stand, Lisa Faulkner had just finished a demonstration and was posing for a picture. I walked up to her and smiled, as my sister brandished my camera hopefully. She shook my hand and said “Hi I’m Lisa!” which I found incredibly sweet. I laughed and said “I know you’re Lisa!” She blushed and said “Oh yes haha!” Seriously, don’t let me near celebs, I become a complete pleb! 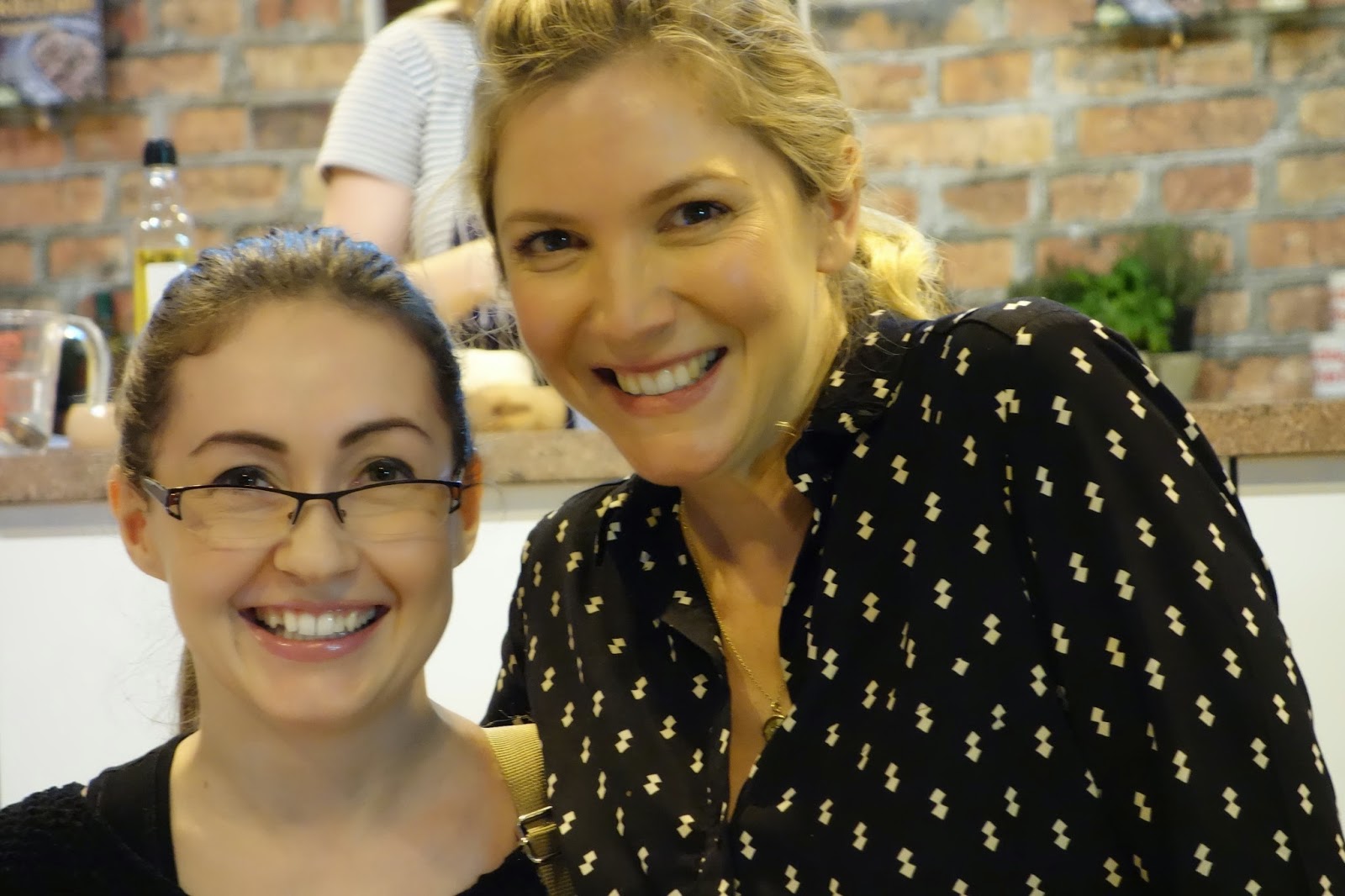 We always try to formulate the best way to navigate around what is an absolutely massive venue, packed to the rafters with exhibitors and visitors. This plan always works well in theory, I say “let’s start at the back where the crowds are quieter, work our way round the outside and circle inwards, so we don’t miss anything!”. What actually happens is that like giddy children we begin to veer wildly off course shouting “ooh CHOCOLATE” or “just spotted knives – I really need a new knife!” or “oh just look how CUTE that stall is, let’s just nip over there for a second”. We end up back where we started but having missed half of the stalls, and then start the process again. Here’s some of the delights on offer: 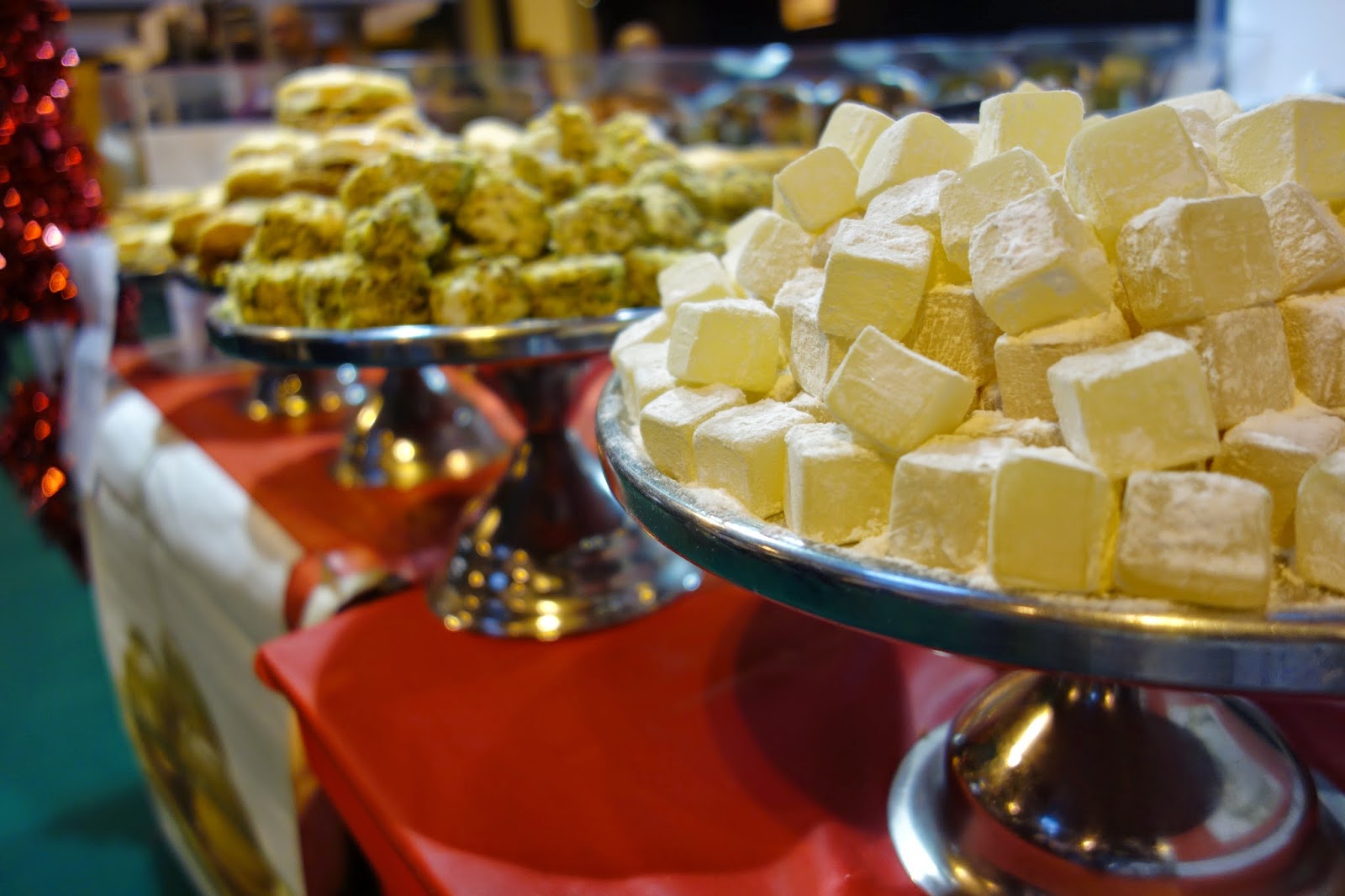 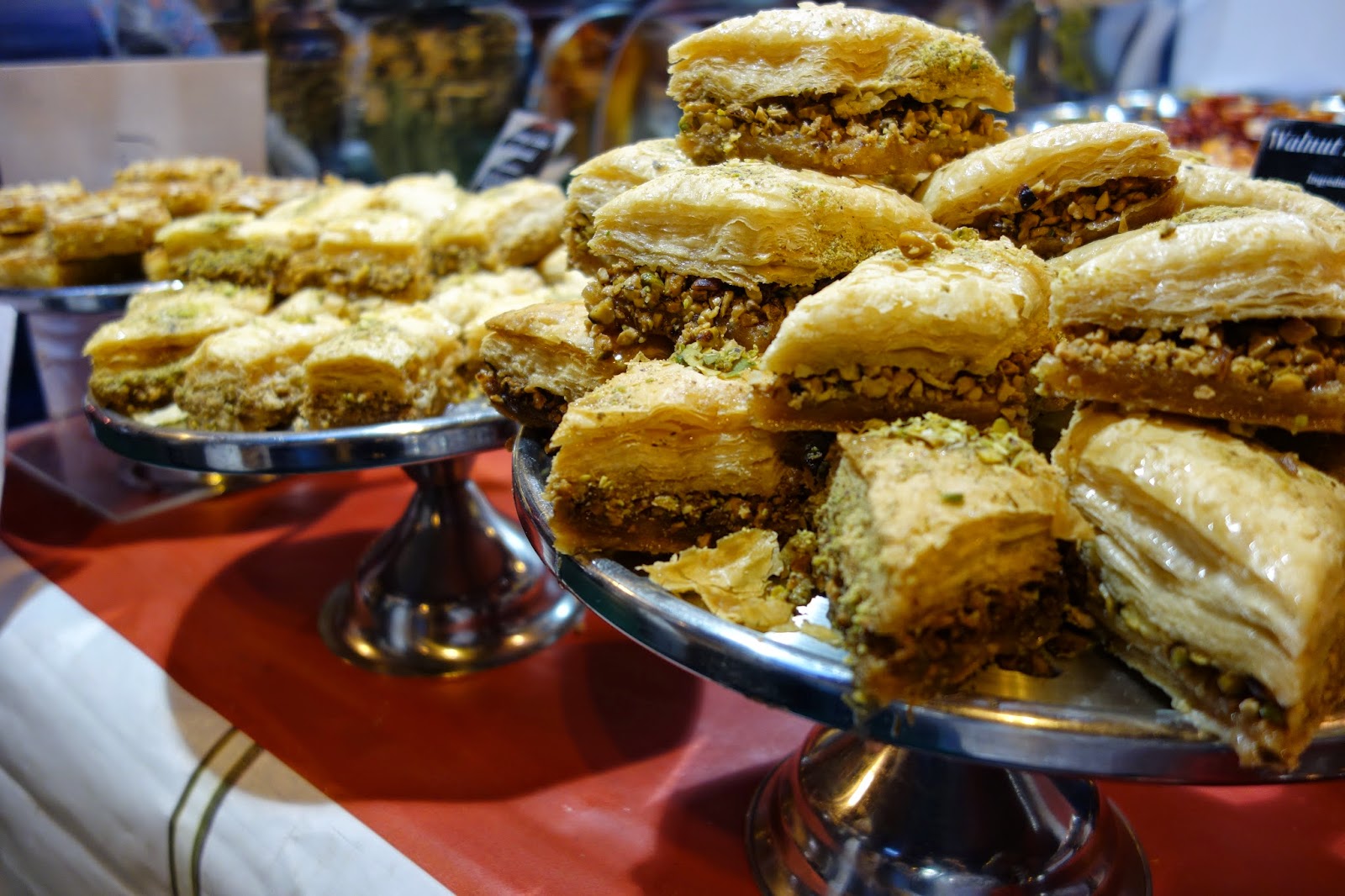 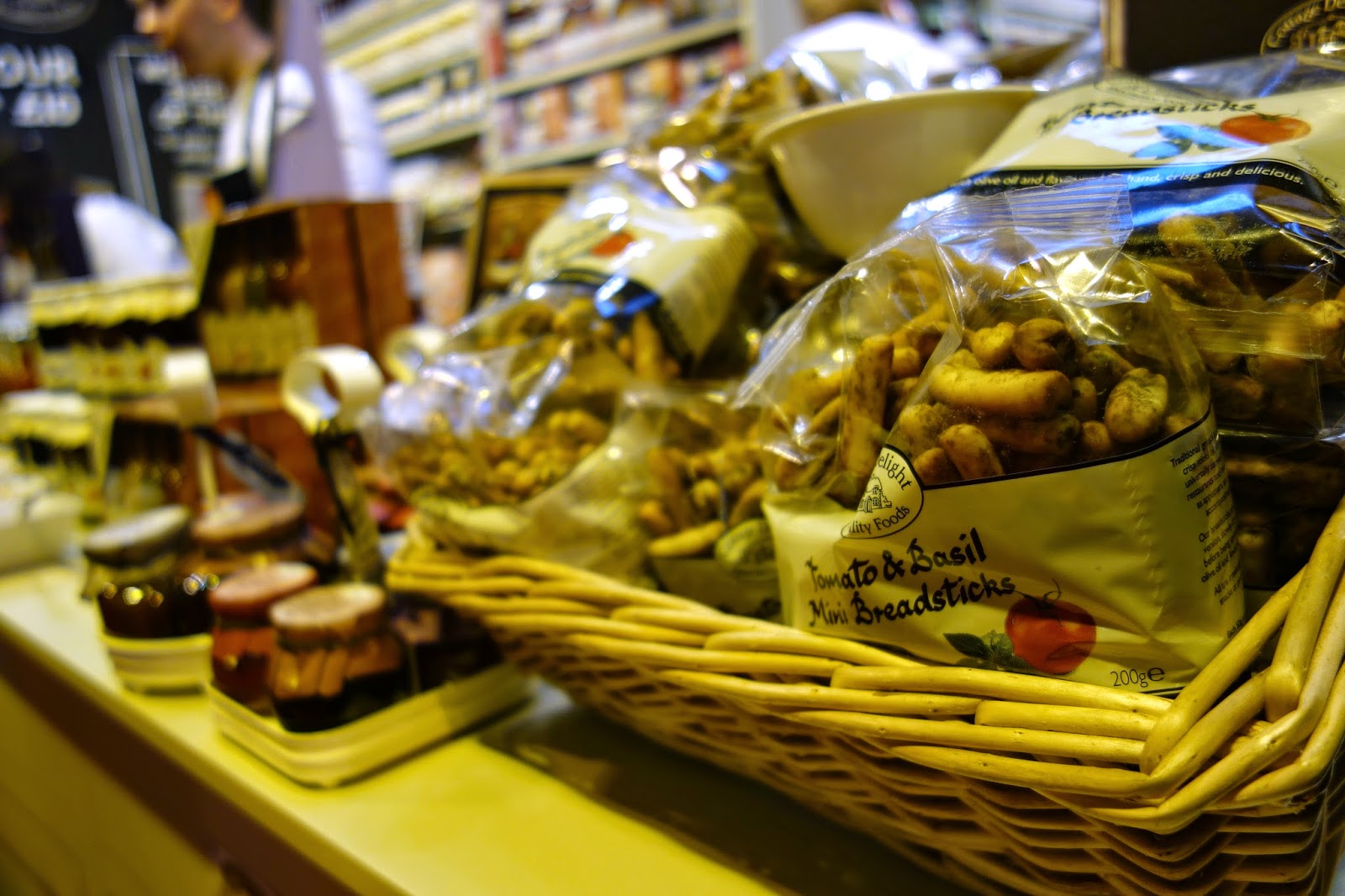 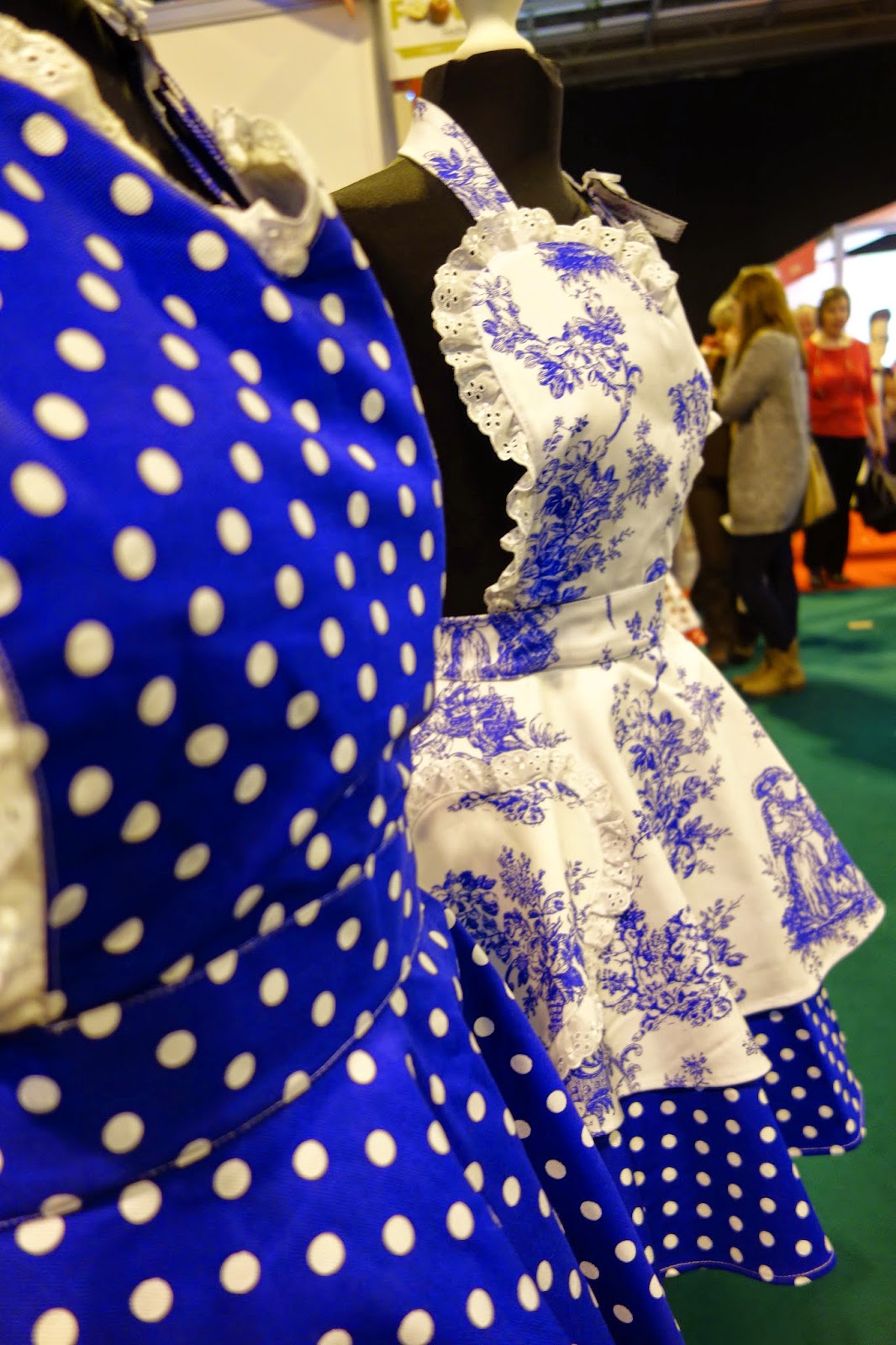 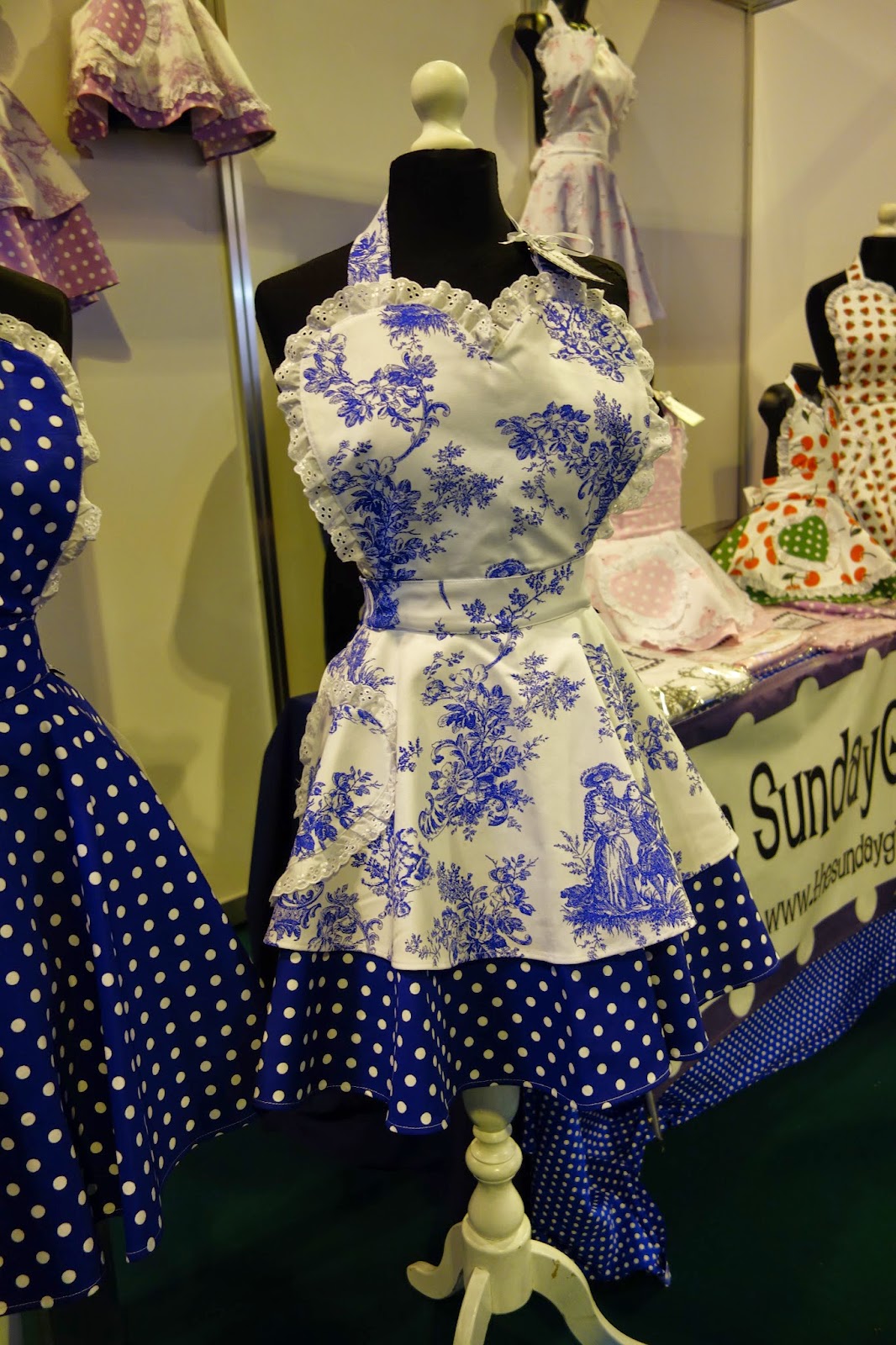 How darling are these aprons? 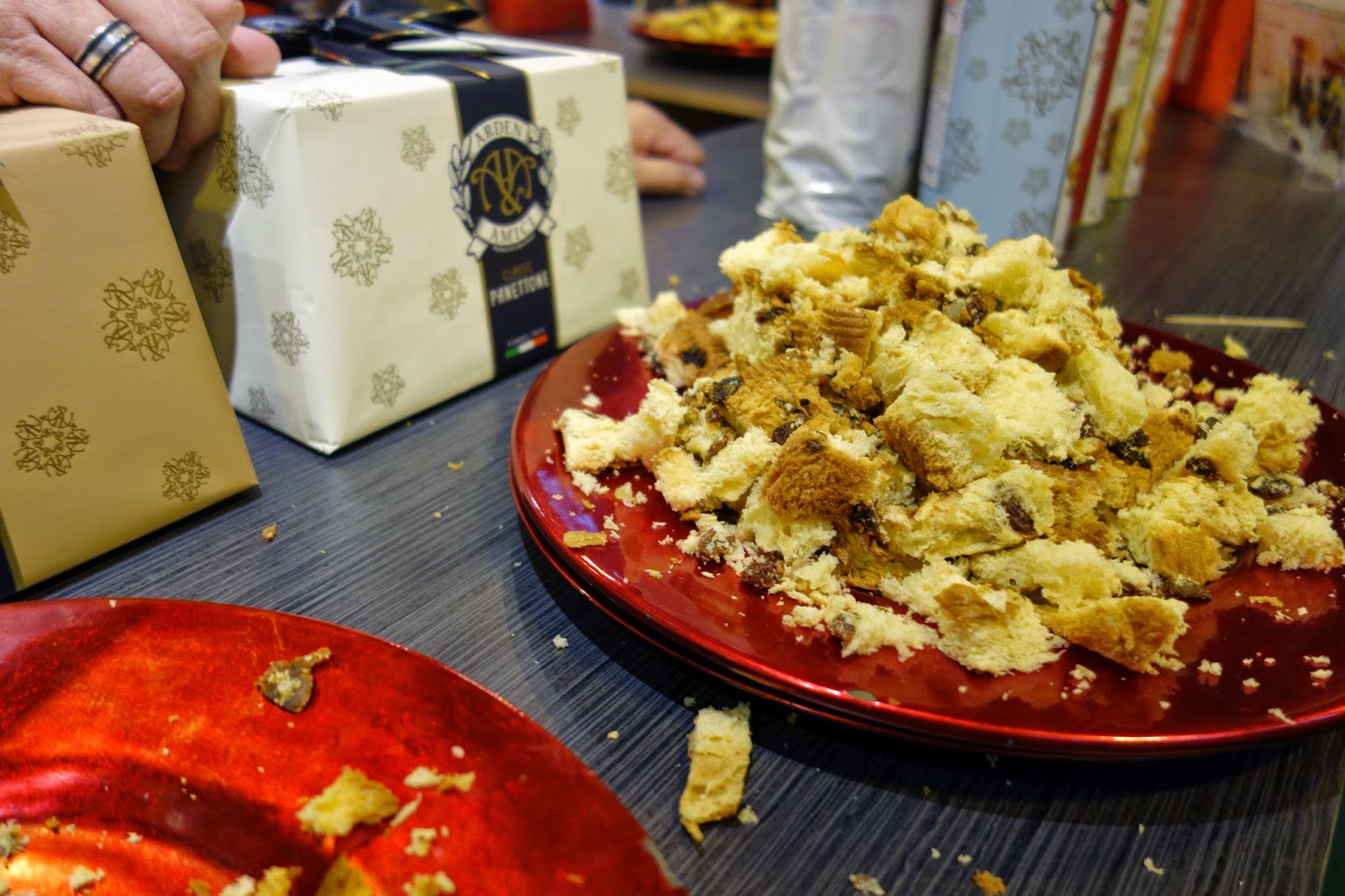 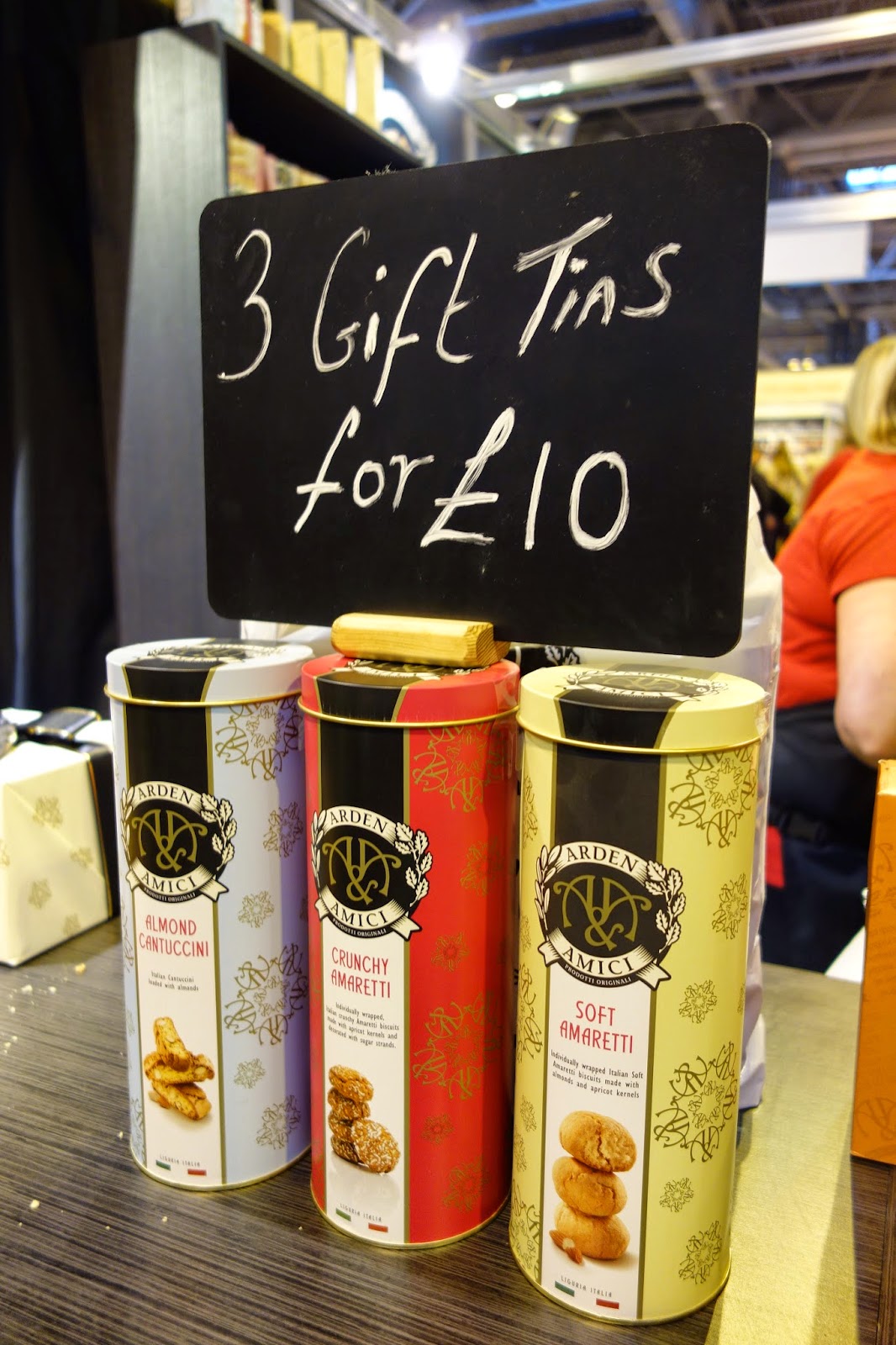 As advance ticket holders we got a free seat for a Supertheatre showing and had picked to see… yes you guessed it, Paul Hollywood and Mary Berry. Having booked our tickets nice and early, we got a cracking pair of seats dead centre stage at the front of the first tier.

Before the show two people were selected from the audience to ‘dance off’ in order to win a KMixer. Hilarity ensued – a middle aged woman on the floor attempting to ‘do the worm’. She didn’t even win.

Mary and Paul were very entertaining and played up to the audience with cheeky banter and a gentle scolding from Mary on Paul’s messiness. 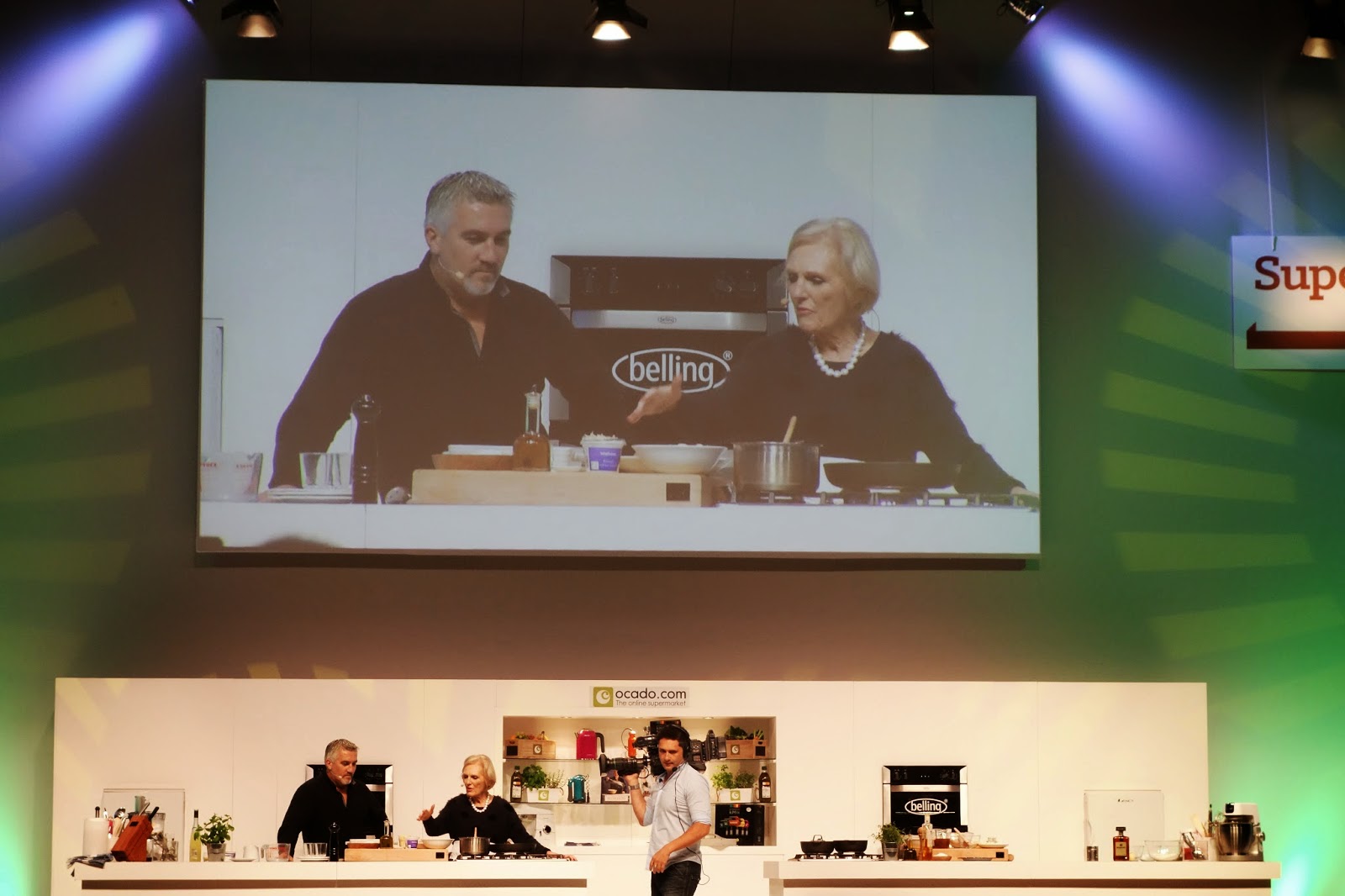 Paul cooked and served a lamb pie to two lucky members of the audience.

When asked to deliver a judgement, the random audience man answered, “The lamb is really moist and succulent, but the pastry has a soggy bottom… probably overworked” with a huge grin on his face, which left the crowd in stitches. (It was later clarified that the pastry was in fact perfect – Paul’s reputation remains intact!)

We raced back around the stalls for some last minute shopping, then stopped to listen to Paul’s interview prior to his book signing. I couldn’t stay for the whole thing as I had a train to catch.

So there you have it, my little Brummie Foodie Adventure! As always I had a fantastic time at the Good Food Show and it was great to catch up with my sister.

There is so much to do, see, try and experience that it’s hard to do everything in one day… which is why we return every year.

Have you ever been to one of these shows or something similar? If so did you pick up any good buys or meet anyone exciting? I’d love to hear from you!