I have been watching a lot of Masterchef recently  (the Australia, South Africa and New Zealand series to name a few) as they are being shown back to back on weeknights which makes it easy to get addicted! One of the current trends on there seems to be making fresh pasta and I’ve been itching to have a go. 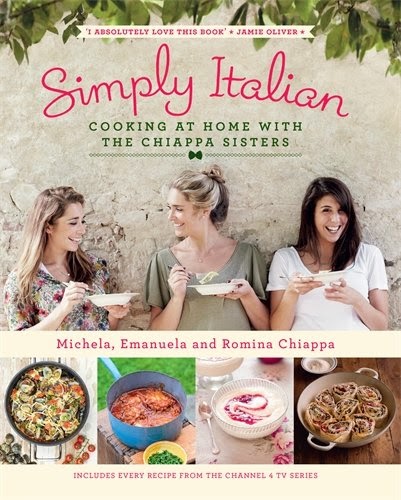 I work in an office and every so often we are visited by companies who run stalls on the landing. Last month we had a visit from The Book People, so I had a browse during my lunch break. As usual I gravitated towards the cooking section, where I found ‘Simply Italian: Cooking at Home with the Chiappa Sisters’ which features recipes from their Channel 4 tv series. (Which you can buy here, or at all good book stores I assume!).

Despite my love of cookery shows I hadn’t seen this one or heard of the Chiappas, but after flicking through the book I decided to pick up a copy. It is the sort of book that appeals to me as it was full of colour photographs so you can see exactly what the food is supposed to look like, accompanied by some delicious sounding recipes that looked easy enough to follow. In particular I was drawn to the fresh pasta section which gave step by step instructions on how to make, roll, and shape some of the different types.

I decided that the spinach and ricotta ravioli seemed like a good recipe to start off my fresh pasta adventure. Not wanting to commit too much money on something that could go disastrously wrong, I resisted the urge to buy the most expensive pasta maker I could find and instead bought a basic model with reasonable reviews from Dunelm (which you can find here).

Knowing that I’m also not particularly skilled with my hands, I did however spend a little bit of money on a ravioli plate. 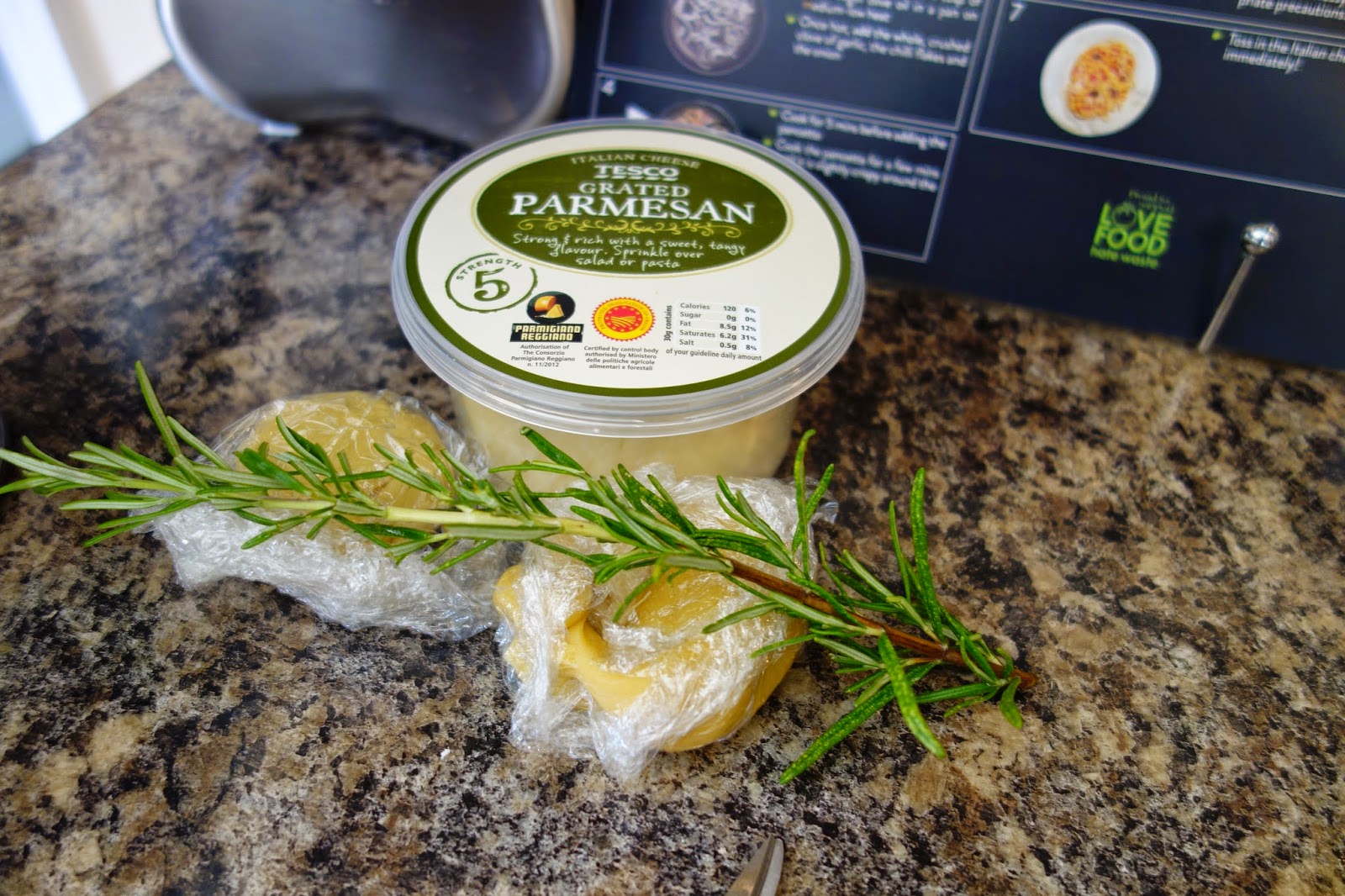 Fresh pasta is made from a remarkably simple recipe – just strong flour, egg and salt, which can be mixed into a dough in a food processor. You then shape it into a ball, wrap it in cling film and leave it to rest for half an hour. So in total including weighing the ingredients, it took me 5 minutes to prepare.

I then set about mixing up the spinach and ricotta filling. 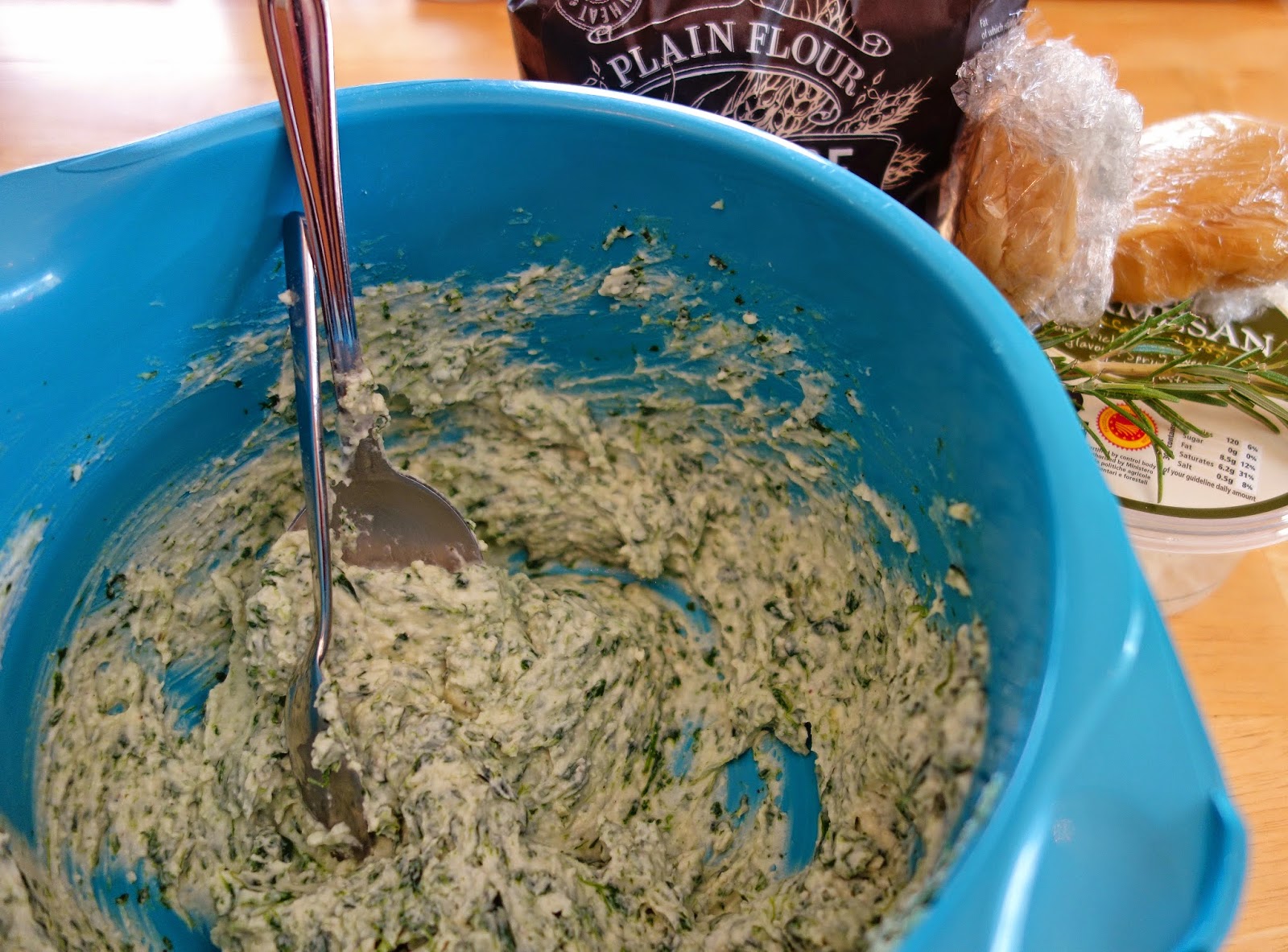 Once complete it was time to roll out the pasta into sheets, using the pasta maker. I was really worried that the pasta would stick to the metal plates and I’d get into a mess trying to roll it, but the dough seemed quite smooth so I popped it into the machine on the thickest setting and rolled it through, with some extra flour to hand in case needed. It rolled through without any trouble – relief! Then it was a case of repeating the process, reducing the thickness of the pasta maker by one setting each time. It was all plain sailing and I was really pleased that the pasta didn’t stick at all, it just concertinaed into a nice sheet of pasta that I could pick up and put back through each time.

Once I’d rolled the first half into a perfect sheet, I set it down against the pasta plate and realised I’d made a mistake – I hadn’t stretched it out wide enough to begin with, so although it was long enough and to the right thickness, it didn’t fit the template width ways and only covered half of it! I decided I’d have to start again, so I rolled it back into a ball, then sent it back through. This time it was a good width so I carefully laid it out onto the template and gently pressed it into the holes, before spooning in a teaspoon of the filling to each ravioli mould. Then I rolled a second sheet, placed it over the top and used the mini rolling pin that came with the template to seal the ravioli and press in the zig zag edges. I have to say, this was all ridiculously simple, even for someone as fat fingered as me! The biggest challenge was getting the ravioli out of the template again without tearing the pasta. I was very careful and split two of them which went onto a reject pile – I thought 10 out of 12 wasn’t bad for a first try! 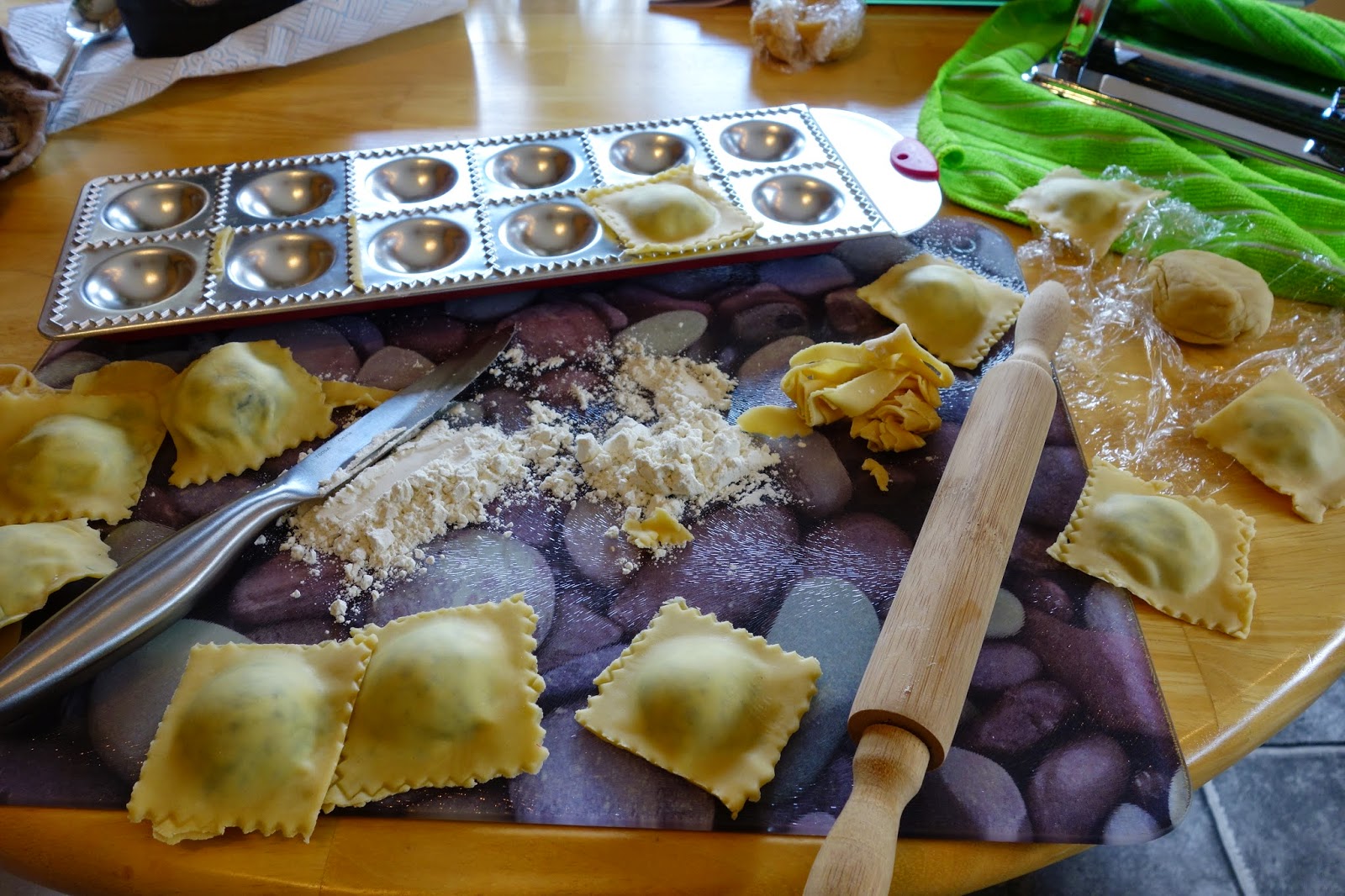 After that it was just a case of cooking the pasta for a few minutes in boiling water, and making a quick butter sauce with some butter melted in a pan with some rosemary (which I managed to burn slightly by rather stupidly leaving it on the hob whilst I did a bit of washing up!). 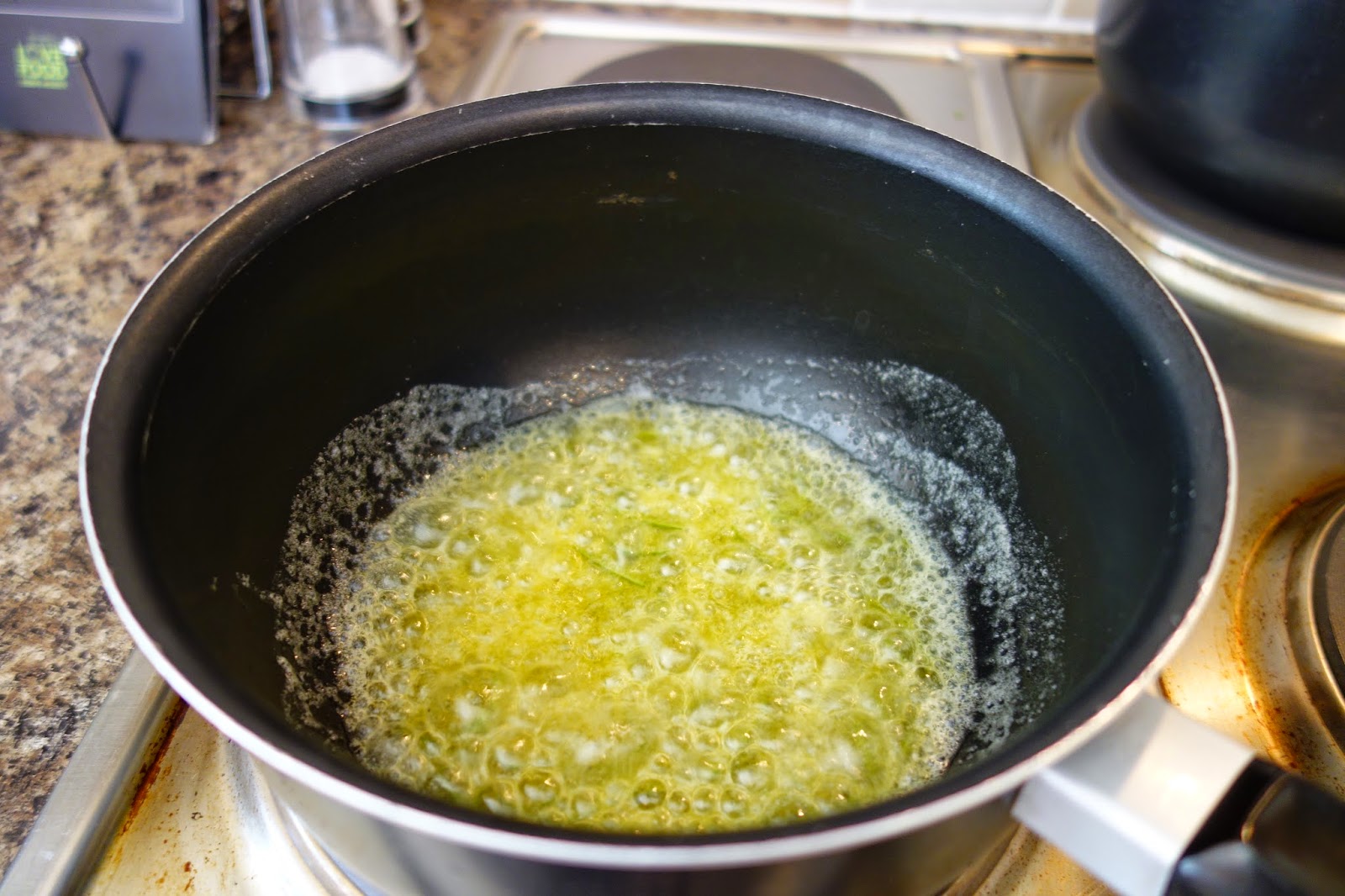 And et voila – here is the finished product. 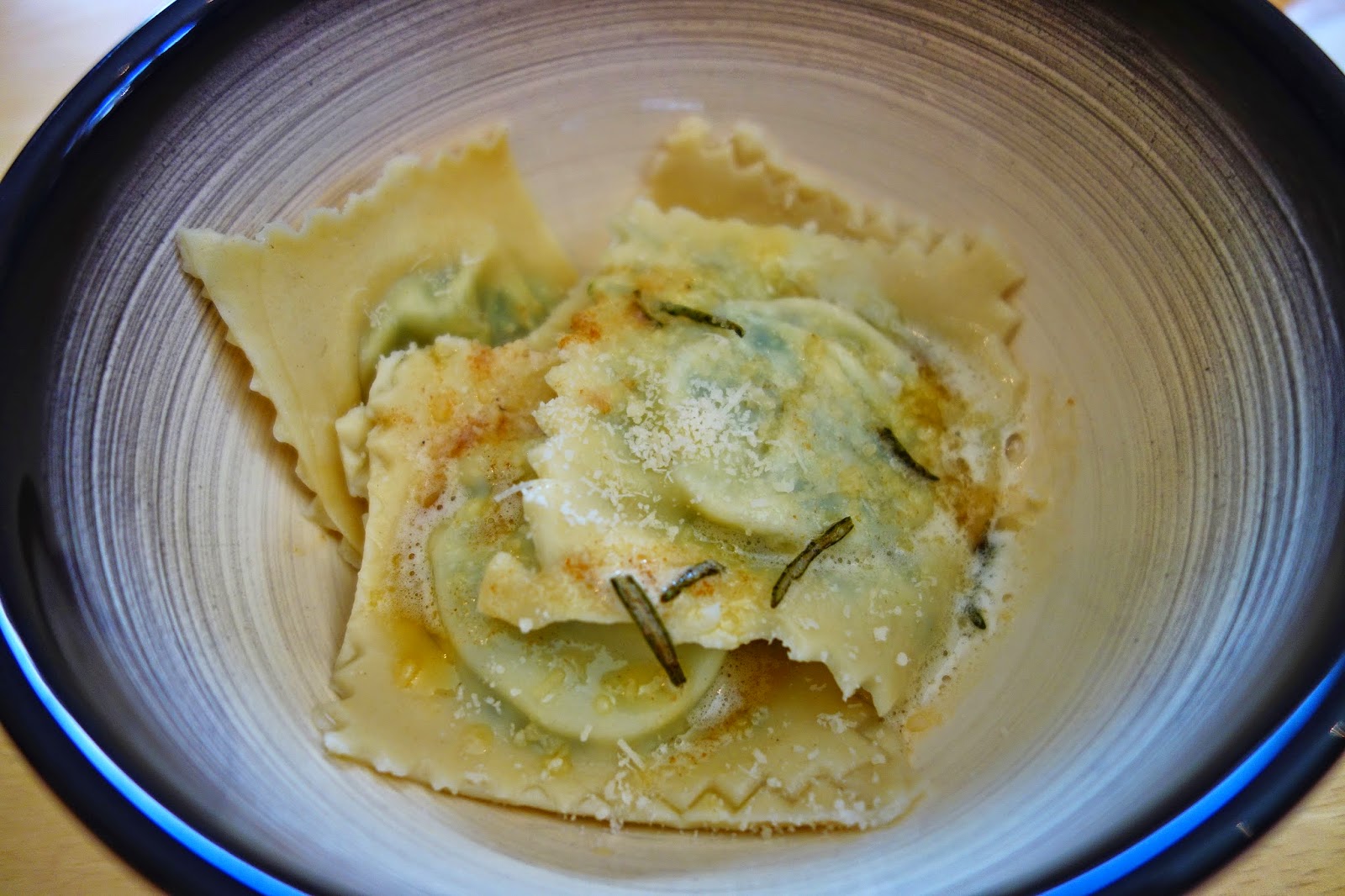 We sat down to eat and I have to say that it was delicious! We often buy the supermarket ‘fresh pasta’ ravioli, and now that I’ve tried the real thing I can wholeheartedly attest that it does not compare to homemade – instead of that toughness that comes with the off the shelf offerings, this pasta almost melts in the mouth.

So in conclusion, it took a bit of time and effort to prepare it, but it isn’t half gratifying when you can sit back and say “I made that!” (and you can be all smug and superior when you watch a contestant get it horribly wrong on Masterchef!!)